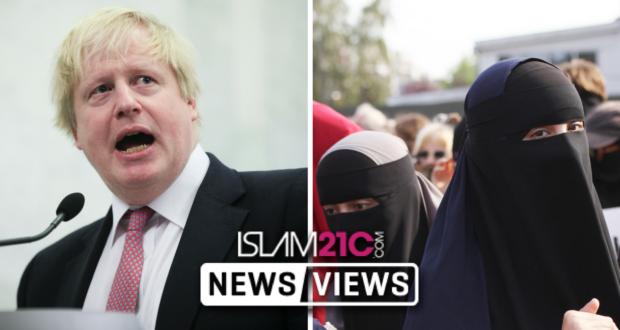 The Muslim Council of Britain has strongly criticised an inquiry that has cleared Boris Johnson of misconduct over his Islamophobic comments regarding the niqab. [1]

In an article written for the Daily Telegraph in August, the former foreign secretary likened Muslim women who wear the niqab to bank robbers and letterboxes. He further stated that he would ask them to take off their face coverings if he should have a meeting with them. [2] [3]

Boris Johnson was widely criticised for his blatant attempt to appease his growing far-right base after the offensive remarks, and ignored numerous calls to apologise, including from Prime Minister Theresa May and the Conservative Party Chairman Brandon Lewis.

The Tory panel of investigators however found that Johnson’s remarks were “respectful” and “tolerant” and that his comments did not violate the Conservative party’s code of conduct.

Soon after the inquiry published its findings, the MCB quickly responded in a statement in which it:

“criticised the outcome of an inquiry into the incendiary and dehumanising comments written by the former Foreign Secretary and Uxbridge MP, Boris Johnson, in the Daily Telegraph.”

The Council further added that “His comments were widely condemned at the time for denigrating the minority of women who choose to wear the face veil” adding that “reports at the time suggested that his Telegraph column had real-world consequences, directly leading to ‘copycat’ verbal assaults against Muslim women and the unleashing of hate and Islamophobia from Conservative supporters.”

The MCB acknowledged that although the inquiry recognised that Johnson’s comments were provocative, the findings nonetheless “exonerated” Johnson and that such comments were not against the principle of free speech.

“Mr Johnson is not a satirist – he is a Member of Parliament, and as such has a responsibility to set the tone for the rest of the UK to follow. In this case, it is far right Islamophobes who have been empowered to follow his rhetoric” the MCB said.

The comments made by Boris Johnson have purportedly prompted a rise in anti-Muslim and Islamophobic hate crime and highlighted the underlying issue of Islamophobia within the Conservative party. [4]

The Tory party and Johnson himself have yet to respond to the inquiry’s conclusions and MCB’s response to it.