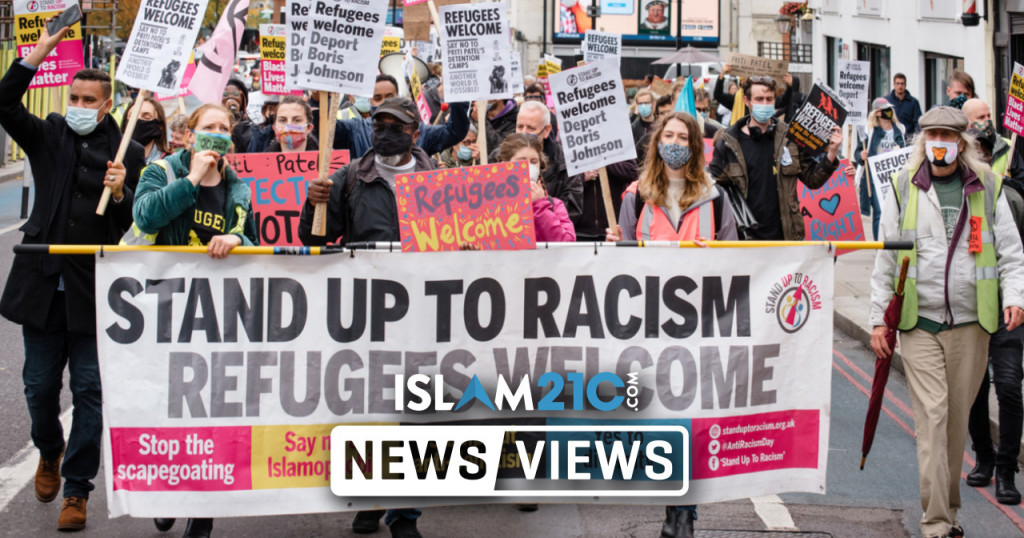 The embattled Home Secretary Priti Patel has been delivered yet another significant political blow. This comes after the Police Federation – the largest and most influential police union in England and Wales – voted overwhelmingly in favour of a no confidence vote. The Thursday poll was triggered by the government’s Wednesday announcement that salaries for officers earning in excess of £24,000 would be frozen for this year. [1]

The National Chair of the Police Federation for England and Wales (PFEW), John Apter, stated the following:

“As the organisation that represents more than 130,000 police officers, I can say quite categorically: we have no confidence in the current home secretary. I cannot look my colleagues in the eye and do nothing.” [1]

The vote was held shortly after the government’s pay freeze announcement, with rank-and-file officers from the 130,000 member body expressing their disappointment and disillusionment with the Conservative Home Secretary. Patel has faced many controversies during her political career, which include extreme bullying allegations while being head of the Home Department, taking an insensitive line against migrants, as well as secretly traveling to ‘Israel’ a number of times, without disclosing these visits to then Prime Minister Theresa May. [2] [3] [4]

The Home Sec might have been better fighting for a pay rise for police instead of spending time & money making a feature film for a Bill that risks breaking international law, removes help for modern slavery victims & abandons children escaping war zones pic.twitter.com/mlQLvY4OTt

Thomas-Symonds, who is the Labour MP for Torfaen, stated the following in the open letter:

“It is the height of hypocrisy for the Home Secretary to praise the police in public with warm words, but let them down so badly when it comes to meaningful action. So it is no surprise that the Police Federation have taken the extraordinary step of confirming that they have lost confidence in Priti Patel.

“The truth is it is not just on pay where police officers have been let down. We also saw the Home Secretary promise action on getting priority access to vaccines for police and failed to deliver, in addition to taking the name of police representatives in vain, by suggesting they had been calling for additional powers to police protests, which was not the case. Little wonder the Conservatives are trying to mark their own homework, by having one of their own Ministers chair the new Police Covenant, this is clearly wrong.” [5]

The letter continues by also demanding a new round of negotiations between the two sides:

“The Home Secretary’s position is clearly untenable, and the police deserve nothing less than urgent action from the Prime Minister and this government. This must include opening negotiations on a fair police pay rise and work to reconstitute the Police Covenant.” [5]

My letter to Priti Patel on the awful way the Tories have treated our police with a 0% pay offer.

This is after letting officers down on the vaccine & claiming to consult the Police Fed when she hadn’t.

The Home Sec has lost the trust of police – her position is now untenable. pic.twitter.com/qnrZsHAYJB

Concerning her professional conduct in government, Patel has been heavily criticised for her alleged bullying of staff and civil servants in the past couple of years. In fact, it was only in February 2020 when Patel reportedly forced the top civil servant at the Home Office – the former Permanent Secretary Sir Philip Rutnam – out of his job owing to the fact that he defended his staff against Patel’s appalling behaviour. [6]

Patel reached a £340,000 settlement with Sir Philip in March. However, she continues to deny the former top civil servant’s claim that she swore and shouted at staff. The Prime Minister, unfortunately, has given his full backing to Patel. This is despite the fact that there was public uproar over her conduct, with a bullying enquiry finding “evidence Priti Patel broke [the] ministerial code”.

Rutnam himself described the settlement as being unfinished business. He recognised that while his own claim has been dealt with, issues of bullying against other members of the civil service remain unresolved. [7] [8]

Sir Philip made the following statement in March:

“I am pleased to say that the government has today settled the claims that I brought against them and which were due to be heard in an employment tribunal in September.

“This settlement resolves my own case. The FDA [union for senior civil servants] is continuing to pursue in separate proceedings the wider issues that have been raised.” [7]

Furthermore, to add to such an abysmal public service record like the above, Patel was also roundly condemned for her 2017 ‘Israel’ trips, which were undertaken without the awareness – let alone the consent – of former Prime Minister Theresa May. At the time, Patel presided as the international development secretary. She was forced to resign after failing to disclose an unprecedented 14 unofficial meetings with Israeli ministers, including then Prime Minister Benjamin Netanyahu.

Patel is a person with a migratory background. Her Indian grandparents first travelled to Uganda, after which her parents emigrated to the UK in the 1960s. After setting up a chain of newsagents in London and the South East, Patel’s parents found financial success in their newly found home. [9]

However, after entering the realm of politics, in an ironic twist Patel has espoused particularly anti-immigrant views. One key example of her insensitive approach to migrants – and particularly asylum seekers – is that of a 38-year-old Sudanese man, identified only by the initials “AA”. AA had reportedly been sold into slavery and tortured while passing through Libya, and had subsequently taken a small boat from France to the UK on June 4 of last year. On August 12, he was sent back to France, where he was left homeless, and ordered to leave the country within a month.

A High Court ruling earlier in July ordered the Home Secretary to use her “best endeavours” to bring AA back to the UK. Tragically, expert reports that had been submitted to the High Court revealed that AA met 9 of the 11 indicators of trafficking. His body showed signs of scarring and other markers of torture as well. [10]

Maria Thomas, a solicitor of the firm Duncan Lewis, which represented AA, welcomed the judgment. She stated the following:

“It is highly likely that there are many other individuals in a similar situation who were unlawfully removed and now face destitution, homelessness and the risk of being returned to a country where they are at risk of serious harm or even death.” [10]

Such is the nature of British politics: the notorious Patel is still on the top rungs of government despite weathering numerous scandals.