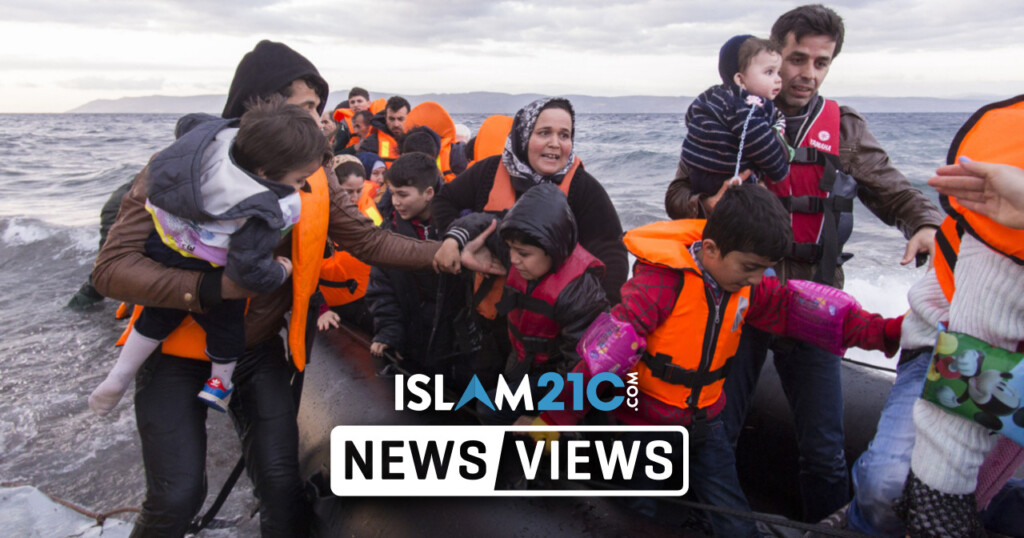 The Home Secretary Priti Patel, who called the asylum system “fundamentally broken”,[1] is pushing for new laws to deny refuge to asylum seekers fleeing to the UK via unsanctioned routes.

Speaking at the Conservative Party conference, the Home Secretary said she would bring in new legislation in 2021 to block “endless legal claims” from asylum seekers.

Number 10 is already in hot water as a result of Patel’s leaked plans to send asylum seekers thousands of miles away to Moldova, Morocco, and Papua New Guinea.[2]

The Home Secretary was reported to have asked officials to look into constructing a dystopian ‘asylum processing center’ on a remote island. [3] The leaked plans would have had refugees housed in old cruise ships or decommissioned oil platforms at sea as their claims were being processed.[4]

Patel claimed that the new system would be “firm but fair” and would mean quicker processing of asylum seekers using legal routes. However, the Conservatives have been criticised for purging all routes for refugees, legal or otherwise.

The Labour MP Jess Phillips wrote: “The home secretary seemed to want to talk about fair legal routes. However, her government (and no doubt her PM chief among its cheerleaders) have at every single stage tried to resist and shut down safe legal routes.”[5]

Under the current system, there are over 40,000 people awaiting verdicts, with almost half forced to wait in limbo for at least a year.

Speaking on behalf of the Joint Council for the Welfare of Immigrants, Minnie Rahman said: “Patel’s speech shows a determination to make things worse, not better, by focusing on getting as many people as possible out of the UK as fast as possible.

“What she should be focusing on are the workable solutions already presented to her many times over: policymaking based on evidence and grounded in the rule of law; an overhaul of Home Office systems and training to eradicate racism; and more safe legal routes to claim asylum so that people do not risk death in their quest to reach safety.”

Amnesty International ranked Britain’s current asylum policy lower than that of other nations, many of which are poorer and less developed than the UK.

Amnesty UK Director Kate Allen said: “It’s clear that either the home secretary does not understand her own asylum system or she is simply determined to shirk even more responsibility for providing protection to people.”

“The facts are that most women, men and children receiving asylum in this country are the very people she wishes to deprive of that in future – by preventing them getting here or taking away the legal protections on which they depend to ensure recognition of their rights.”

Allen concluded by saying: “It is shameless for [Patel] to imply the UK has some exemplary record in providing sanctuary. Many of this country’s European neighbors – even more so several poorer and less stable countries further away – continue to do hugely more than the UK in providing a home to people forced to flee tyranny, torture and war.”

Patel’s proposals have been met with predictable outrage. In her speech at the Conservative Party conference, Patel said she would happily sacrifice her popularity in pursuit of her objectives.

“If at times it means being unpopular on Twitter, I will bear it. Because as Conservatives, we do not measure the depth of our compassion in two hundred and eighty characters on Twitter, but in the actions we take and the choices we make.”

On Twitter, Patel wrote: “The number of illegal small boat crossings is appalling and unacceptably high.”[6] About 7,000 people have arrived in Britain this year in small boats across the English Channel. These trips place asylum seekers and their families – many of whom are fleeing war-torn countries and persecution – at serious risk of death.

True to her commitment of sacrificing her popularity, Patel also used the platform to criticise the Black Lives Matter “mobs” whose protests she described as “hooliganism and thuggery.”

Regarding the tearing down of slave trader statues, Patel said: “It is not acceptable for mobs to tear down statues and cause criminal damage across our streets.”

Many experts fear that Patel’s new legislation will only worsen the trend set by 10 years of Conservative Party policy at the expense of the safety and lives of those most in need.