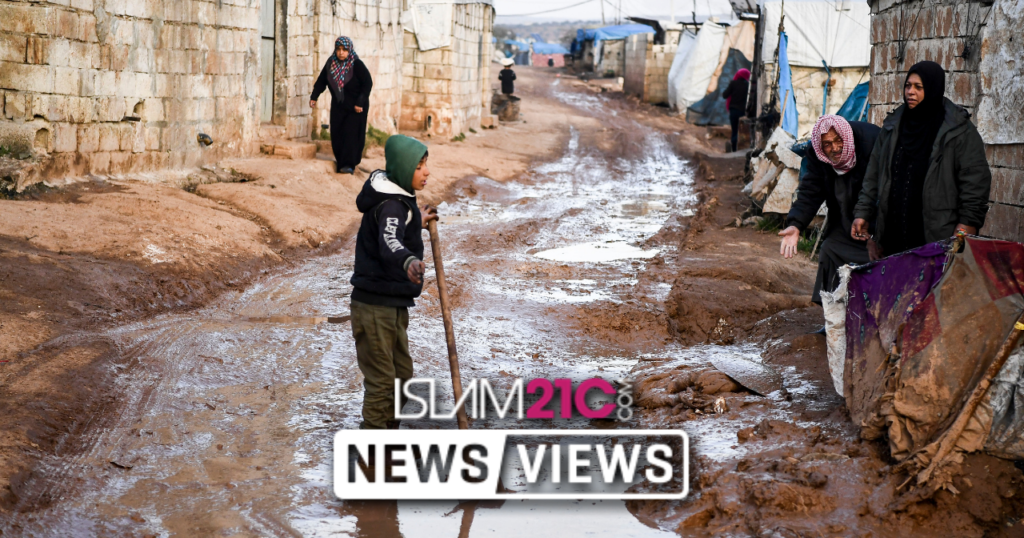 Over 11,000 refugees are facing the risk of being exposed to freezing temperatures after heavy rainfall in Syria’s Idlib province has left them without shelter.

Charity groups and aid workers are warning that refugees, which include many children and their families, risk freezing to death as temperatures fall below -1C. Aid workers have asserted that there are shortages of tents, blankets and fuel for generators. [1]

In Lebanon around 70,000 Syrian refugees, 40,000 of whom are children, are also at risk of extreme weather, with 361 camps affected by cold winds, heavy snow and rain falls. [2]

Refugee camps in the Lebanese border town of Arsal have been affected by heavy snow fall while camps in the Bekaa region have been hit by severe flooding by torrential rainfall that is expected to resume on Sunday.

Save the Children, a charity distributing tents in Idlib, has said that there were cases last year where babies had frozen to death due to previous hazardous weather and that this year many more are vulnerable. [3]

“The conditions in the camps and settlements where displaced children are living are miserable, with families suffering through freezing temperatures with only the most basic protection from the elements. Malnourished and young children are particularly vulnerable to disease and illness in this weather.”

“We often see illnesses that flourish in unclean, crowded living conditions such as ear, eye and respiratory infections. Cases of anaemia are also common, due to children and pregnant women not having access to nutritious food.” [4]

Military offensives by the Syrian regime in recent months have displaced many more refugees and has exacerbated an already fragile situation.

According to the United Nations half of the 2.9 million people living in Idlib province are displaced. Children, who make up half of the displaced population in Idlib, are the worst affected and have to relocate several times in harsh and dangerous conditions. [5]