Sisi: “Boycott should include Turkey” 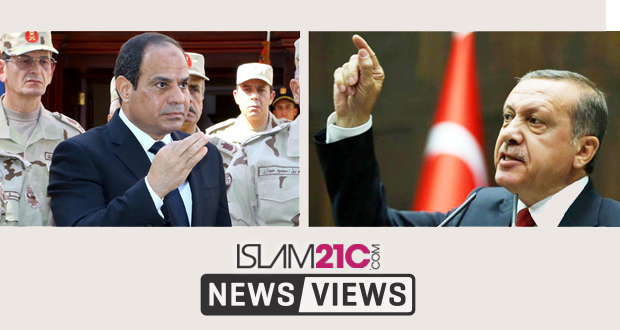 Self-imposed president of Egypt says the Gulf boycott against Qatar should expand and include Turkey to intensify pressure against Doha.

Egypt’s self-imposed president, Abdel Fattah el-Sisi, has called on its allies in the Gulf region to intensify the diplomatic conflict and to include Turkey. According to ‘the New Arab’, Abdel Fattah el-Sisi has now urged its counterparts in the Gulf to increase its severing of diplomatic ties with Qatar by increasing its boycott to Ankara until it halts its support for Qatar.[1]

Sisi said boycotting Turkey would sustain pressure on Qatar, pressuring Doha to give in to the demands of the Gulf. He proposed the idea and advised it at a meeting last Thursday with the King of Bahrain, Hamad Bin Isa Al-Khalifa, in Cairo. Sisi reportedly accused Turkey of financing and supporting ‘terrorist groups’ such as the Muslim Brotherhood and other groups in neighbouring Syria.[2]

The push by Sisi to boycott Turkey comes after the Turkish President Recep Tayyip Erdoğan harshly criticised and condemned the Egyptian regime for its military coup against the first democratically-elected president Mohamed Morsi. The President of Turkey also made some remarkable statements during an Iftar in Ankara a few days ago. He said;

“I want to clearly say that we disapprove of the sanctions on Qatar”.[3]

Turkey is currently working on a peaceful resolution to the crisis in the region through diplomacy and reconciliation.