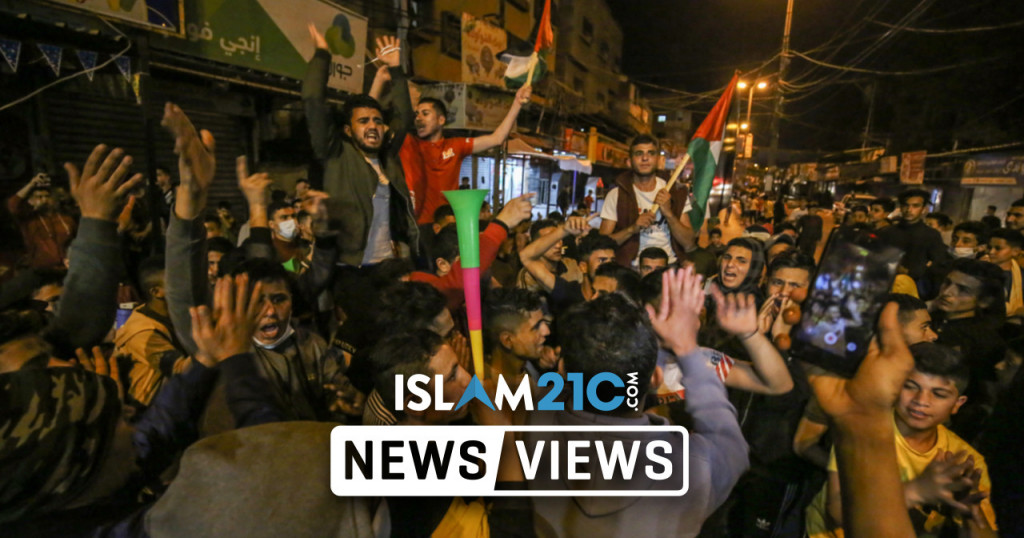 Amidst the recent uprising of Palestinian youths – who have been justifiably disgruntled at being barred from accessing the plaza outside the Damascus Gate entrance to Masjid al-Aqsa in the Old City of Jerusalem during the blessed month of Ramaḍān – numerous global scholarly groups and khatibs have expressed their support for “the heroes of Jerusalem who confronted this Zionist belligerence and achieved a victory in the Damascus Gate Uprising” in a letter published on April 28th. [1]

Sixty groups in total – ranging from within Palestine to neighbouring Syria and Yemen, as well as further afield in Eritrea, Indonesia, and Turkey – co-signed a letter that said:

“Your brothers from both the community of scholars, Khatibs and callers to Islam from countries across the world stand by you, supporting your resistance and urge you to stay strong…” [1]

In reference to the night journey and ascension of the Prophet Muhammad (sall Allāhu ‘alayhi wa sallam) into Heaven from Masjid al-Aqsa, the powerful letter, entitled A Letter from the Scholars and Khatibs addressed to the Murabitin in Jerusalem and to the General Ummah in Light of their Recent Uprisal, added:

“We wish to tell you that we are with you. We stand by you in the words uttered at our pulpits. You are in our hearts and prayers. Allah is with you and His Hand is over yours just as you have pledged allegiance to Him to be victorious and to protect the destination of our Prophet’s night journey sala Allahu ‘alayhi wasalam.” [1]

The Zionist occupation forces built fences to surround the iconic Damascus Gate, which is famed as being one of the main entrances to the Old City of Jerusalem and a prime location during the month of Ramaḍān for Palestinian Muslims to unwind in the evenings after prayers. After days of Palestinian unrest and protests against these fences, the Israeli aggressors succumbed to immense pressure and removed all metal barriers on April 26th, easing tensions that had resulted in riot police attacking protesters who threw stones in defiance of the ban on the plaza. [2]

Close to a fortnight after the implementation of barricades around the Gate, Israel Police Commissioner Kobi Shabtai sought to bring in an element of reverse Trump-esque ‘fake news’ in suggesting it was a longstanding policy to erect barriers in the vicinity. However, photos immediately surfaced on social media that proved this was not the case in previous years, with pictures showing the area overflowing with people. [3]

Arab-Israeli politician and Knesset member, Ahmad Tibi, told Reuters that metal barricades were from the beginning a “mistaken” decision:

“The decision to reopen is right … It is a good decision in the right direction, but they should stop attacking Palestinians.” [2]

Samir Gheith, who hails from Jerusalem, suggested the occupation forces were trying to stop Palestinians from being in a joyous mood during the holy month of Ramaḍān:

“I think they don’t want to see us be happy … But they came to understand that they needed to put a stop to all these tensions.” [4]

Amongst the scuffles between Palestinians and the Israeli police, there were reportedly hundreds requiring medical attention on April 22nd alone, in particular after members of Lehava – a far-right Israeli nationalist group described as “an Israeli version of the KKK” – held a violent demonstration that saw approximately 300 extremists chanting “Death to Arabs” whilst marching towards Damascus Gate, setting alight Palestinian homes and property along the way. [5]

In an article on the news website of the American Party for Socialism and Liberation, comparisons were made between the US police and the unnecessary and unjustified use of force against innocent Palestinians, who were assaulted by Israeli occupation forces whilst members of Lehava were left to roam freely even as they wrought havoc on Palestinians:

“Despite their fascist history and this pogrom-style assault, the Palestinian defenders of their land, not Lehava, were met with violent repression from Israeli occupation forces. This is very similar to how the U.S. police brutalize anti-racist protesters while coddling and even outright supporting fascist mobs both in the past and, for example, during the fascist-led assault on the U.S. Capitol on Jan. 6.” [5]

With the upcoming annual ‘Jerusalem Day’ festivities scheduled to begin on the evening of Sunday, 9th May and end in the evening of Monday, 10th May, the authors of the scholarly letter make reference to the day by urging:

“…Those that will impede these same settlers when they may choose to do the same on their upcoming ‘Jerusalem Day’ holiday on the 28th of Ramadan.”

The signatories also push for those within Palestine to rally towards Masjid al-Aqsa and join the i‘tikāf there, with an emphasis on doing so after the 27th of Ramaḍān and remaining there until the 29th for hopes that Laylat al-Qadr may fall on any of these days.

In calling upon Muslims around the world, the signatories state that “resisting the planned, large incursions that extremist, Zionist mobs are planning on the 28th of Ramadan or so-called ‘Jerusalem Day’ is upon the whole Ummah.” [1]

In a sign of the sheer strength of feeling amongst Muslims, the Pakistani political party Jamaat-e-Islami declared it would observe the coming two Fridays as days of solidarity with Palestine. The party’s chief, Sirajul Haq, insisted that the nation actively pray for Palestinians during these last days of Ramaḍān.

The former senator and incumbent Ameer of the party further stated:

“I appeal to Pakistani clerics to highlight Zionist brutalities against the innocent Palestinian Muslims in Friday sermons in mosques and create awareness among the people about the first Qibla of Islam.” [6]

The full letter may be read here:

A message of the Ummah’s Scholars to Al-Quds

[1] A message of the Ummah’s Scholars to Al-Quds