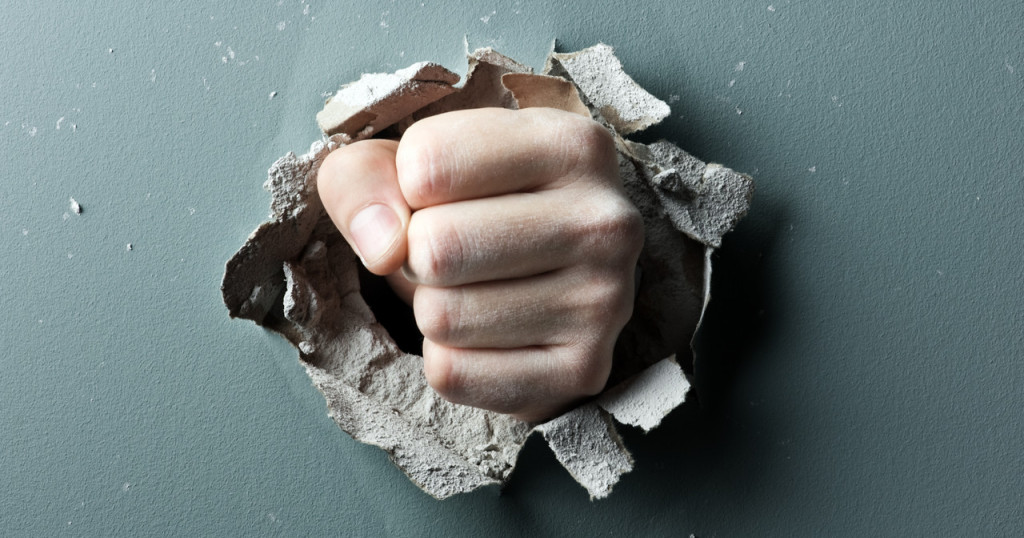 Anger is a misunderstood emotion; it is what you do with it that matters. It can be destructive like a storm, but can act as motivation for change. It tells us when our boundaries are being crossed and can deter adversaries. The Sunnah of the Prophet Muhammad (sall Allāhu ‘alayhi wa sallam) directly offers techniques that can be used to help when a person is angry. The tips below are a compilation of contemporary therapeutic techniques that are also directly from the Sunnah.

The Prophet (sall Allāhu ‘alayhi wa sallam) said, “If a man gets angry and says, ‘I seek refuge with Allāh,’ his anger will go away.”[1]

In order to seek refuge in Allāh from anger, a person must first be aware that they are becoming angry. Catching your anger at the earliest point can make it easier to manage and prevent it from snowballing into rage.

When conscious of your feelings of anger, seek refuge in Allāh. In Arabic, say the following:

Truly connect to these words and their meanings, and surrender your anger to Allāh.

When you become angry, your brain sends signals to your body to prepare it for battle. However, if you can relax your body, you can then begin to take control of the situation – this is because a person cannot be both relaxed and tense at the same time. So, when you have identified the early signs, do the opposite. If your heart rate is increasing, then take deep breaths to slow it down. If your voice is rising, make a conscious effort to speak in a lower and calmer tone. Relax the muscles that have become tense throughout your body, including your jaw, shoulders, and hands.

The physical agitation that one experiences when angry can be overwhelming. When we act upon the above hadith, we see that our physical state changes, whether it is our blood flow due to the moving of positions, or the change in state of mind that can come from doing wuḍū’.

Taking deep breaths is effective in changing your state and calming the physiological symptoms of anger. When you are angry, you need to breathe. Take a deep breath in through your nose for four seconds, allowing the air to fill up your stomach. Then, exhale with pursed lips in a controlled manner through your mouth for eight seconds. The exhalation part of the exercise is where your muscles relax, so make sure this is controlled, and be aware of what you are feeling physically. Make a conscious effort to relax your muscles as you breathe out.

The Messenger of Allāh (sall Allāhu ‘alayhi wa sallam) said: “If any of you becomes angry, let him keep silent.”[3]

We usually believe that we have to react immediately when confronted with an issue. This is often not the case. Pause, take a breath, walk away, and say, “I need some time to think about this.” Allow yourself time to gather your thoughts and cool down. Reacting straight away when angry is almost always problematic.

The great thing about deep breathing is that it takes us back into our bodies rather than our clogged-up minds when we start to get agitated. As your body begins to relax, ask yourself: what is it that you are really feeling? Think of anger as a secondary emotion and ask your gut: what lies underneath the anger? Do you feel sad? Rejected? Disrespected? Devalued? Embarrassed? Stupid? Scared? It could be one or a combination of the above, but identifying what we feel will allow us to understand what we need.

So, the next time someone cuts in front of you whilst you are driving, explore the feelings underneath the anger – fear, disrespect, embarrassment, and the like. If you need a moment to pull over and re-calibrate, then do so. It is better to be late than to drive disorientated – imagine how disastrous that could be!

With time, I have grown more sceptical of the old saying that was taught to us as children, “Sticks and stones may break my bones but words will never hurt me,” or some other variation depending on what part the English-speaking world you may be from. This saying could not be further from the truth. Words can hurt. They can leave deep scars and plant seeds of insecurity. If you were raised in an environment that did not fully accept emotions, chances are that you have a limited emotional vocabulary and may find it hard to name your feelings. Seeing a therapist can really help to identify your feelings better in order to heal wounds and repair old damage. The following saying comes to mind:

“If you don’t heal what hurt you, you’ll bleed on those who didn’t cut you.” – Unknown

Ask yourself: on a scale of 1-10, how angry do I really feel? When anger becomes habitual and our go-to emotion, we can often reach 10 on that scale without realising it. Categorising anger allows you to be more objective and question the anger. How serious is this issue? Is it worth it?

Express your anger. Many people learn coping mechanisms and eventually become overwhelmed by the intensity of their emotions, as they have not communicated their needs. Our anger is trying to communicate to us. It is telling us that we need something or that a boundary has been crossed. Learning to communicate our needs more effectively is a key part of long-term anger management. Identify what it is that you are really feeling, and use ‘I’ statements to express it, accompanied by a clear request.

“Adam, when I see your jacket on the chair with your shoes and socks in the middle of the hallway, I feel irritated as I am needing more order in the house. Would you be willing to put your jacket and shoes in the closet and your socks either in the washing basket or your room?”

Try to understand the perspective of the other party. They, too, have needs and feelings. Trying to understand their side will take you out of your own mind. Often in times of conflict, the ability to communicate effectively to another person who we understand and whose feelings we value can be a powerful technique to de-escalate problem situations. This does not mean that we agree with them or discount our own needs, rather it spares the person from the frustrations of not being heard. By modelling empathy, we hope to receive it from the other party too and, in turn, reach a comprise that is a win-win for both.

Be prepared to not receive the response that you wanted, so that you are not caught off guard. If this happens, then identify the signs of anger again and repeat the steps previously mentioned. We must learn to become comfortable—or at the very least less aggravated—by the physiological changes that takes place within our bodies whilst we are angry. Sometimes, things will not go our way even if it is completely unjust. We do not have a divine right to have things our way, so we need to learn to sit in the uncomfortable feeling, knowing well that it will pass eventually, rather than giving in or falling into the trap of anger.

11) Think of the consequences

Reflect on the consequences of your anger, that which you have already felt and also that which may happen if you continue responding in an angry way. Has it led to jail time? Has you partner left you? Have you pushed away family members or friends? Have you lost a job or other opportunities in your life? Get a piece of paper and write down the following:

Allow your imagination to go into the future as well, and think about what could happen if you continue. The more detailed and personal you can make it, the better the deterrent it will be for you when things do not go your way and when anger raises its ugly head.

Abū Bakrah reported: The Prophet (sall Allāhu ‘alayhi wa sallam) said, “If two Muslims confront each other with swords, both the killer and the killed will be in Hellfire.” It was said, “O Messenger of Allāh, we understand for the killer, but why for the one killed?” The Prophet said, “Verily, he intended to kill his companion.”[5]

Jābir b. ‘Abdullāh reported: A man came to the Messenger of Allāh (sall Allāhu ‘alayhi wa sallam) at Al-Ji’ranah from Hunayn and there was some silver in the pocket of Bilāl. The Messenger of Allāh took a handful from it and distributed it among the people. The man said to him, “O Muhammad, be just!” The Prophet said, “Woe to you! Who will be just if I am not just? You would fail and lose if I were not just.” ‘Umar b. al-Khaṭṭāb said, “O Messenger of Allāh, let me kill this hypocrite!” The Prophet said, “I seek refuge in Allāh that the people would say I am killing my companions…” In another narration, the Prophet said, “Leave him alone, lest people say Muhammad is killing his companions.”[6]

Resisting the pull of anger is one of the signs of righteousness. Reminding yourself of the reward of not getting angry and earning the pleasure of Allāh should be a motivation for any believer.

“Those who spend (benevolently) in ease as well as in straightness, and those who restrain (their) anger and pardon men; and Allāh loves the doers of good (to others).”[7]

Anas reported that the Prophet (sall Allāhu ‘alayhi wa sallam) passed by some people who were wrestling. He asked, “What is this?” They said: “So-and-so is the strongest, he can beat anybody.” The Prophet (sall Allāhu ‘alayhi wa sallam) said, “Shall I not tell you who is even stronger than him? The man who, when he is mistreated by another, controls his anger, has defeated his own shayṭān and the shayṭān of the one who made him angry.”[8]

“Whoever control his anger when he has the means to act upon it, Allāh will fill his heart with contentment on the Day of resurrection.”[9]

Losing your temper after you have tried hard not to can feel really disheartening, and can even make you angrier – but do not stop trying. Learning to control your anger can be like learning to skate on ice. At first, you are just about holding on to the sides, trying not to fall. Eventually, this becomes easier and you become more comfortable, but every now and then, even the best skaters fall. You have to dust yourself off and try again. Similarly, stopping the urge to not lash out, scream, or hit something can feel like you are just about holding on, but over time, you will get better at it, in shā’ Allāh.

“Whatever [pleasure] you have been given is [no more than a fleeting] enjoyment of this worldly life, but what is with Allāh is far better and more lasting for those who believe and put their trust in their Lord. Those who avoid the major sins and immoralities, and when they are angry, they forgive.”[10]

Ahmed Tomal is a BACP qualified Counsellor and Psychotherapist. He is the founder of Tawfiq Therapy (www.tawfiqtherapy.com) which is a private practice specialising in bettering mental health and relationships.