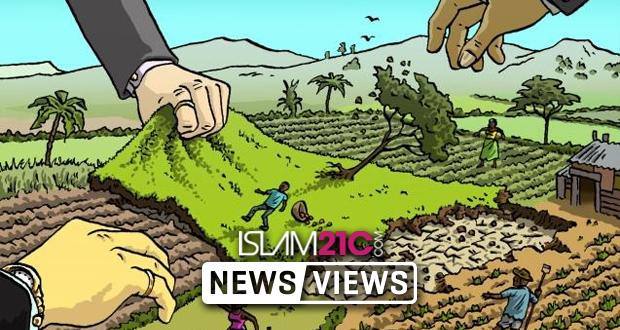 The US administration is expected to recognise Jerusalem as the capital of ‘Israel’. Hundreds of Palestinians have already taken to the streets in Gaza denouncing the seemingly unilateral decision taken by Trump that would also see the US embassy moving from Tel Aviv to Jerusalem.[1]

The decision is expected to take place at 18:00 GMT on Wednesday and comes amidst global condemnation, particularly by Muslims across the world who hold al-Masjid al-Aqsa and Jerusalem as two of the greatest of Islām’s sites on earth. Palestinians across Gaza and the West Bank have united against the move; it is illegal by international law and goes against decades of accepted terms of agreement that East Jerusalem, including al-Masjid al-Aqsa, constitutes undivided Palestinian territory. This move to recognise Jerusalem as the capital of “Israel” seeks to silence the Palestinian and Muslim aspiration of ending the 50 year illegal Zionist occupation of Jerusalem.

In a statement by Hamas, it emphasised that Jerusalem is a red line and that “the resistance will not allow any desecration of it.” In the most powerful diplomatic response to the move, Turkish President, Recep Tayyip Erdogan, warned the US administration that a recognition such as this may force the Turkish Government to severe diplomatic ties with the Zionist entity. In an address to the AK Party on Tuesday, Erdogan added:

“I tell Mr. Trump that Jerusalem is a red line for Muslims. If such a move is taken, we will convene a meeting for the Organisation of Islamic Cooperation (OIC) in Istanbul and will take a number of important steps on the part of the Muslim World.”

On Wednesday, a Turkish presidential spokesman, Ibrahim Kalın declared that Turkey would be hosting a meeting of the Organization of Islamic Cooperation (OIC) to discuss Jerusalem. Kalın further stated at a press conference that the United States needs to correct its “grave mistake” on Jerusalem.

The Muslim Brotherhood in Egypt called on the collective mass of Muslims across the Arab and Muslim world to express their solidarity with the Palestinian people.[2]

A number of international governments expressed ‘concern’ over the move with Saudi Arabia warning of “very serious repercussions” towards what is a “provocation to the feelings of all Muslims”. According to Arab Affairs Analyst, Tsvika Yahzakili, on Israel’s ‘Channel 10’, “the (US) declaration of Jerusalem as the capital of Israel could not have taken place without coordination with Saudi Arabia and Egypt”, a statement further confirmed by Israeli News Website ‘0404.co.il’, in its statement: “not all of the Arab World opposed the relocation of the US Embassy to Jerusalem; Saudi Arabia has announced that this relocation will not harm its relationship with Israel[3] according to the Palestine Information Centre.[4]

It is noteworthy to mention that since the Zionist occupation of Jerusalem in 1967 Palestinian resistance has been unyielding. In a similar gesture of hegemony over the Masjid in the year 2000 when Prime Minister Ariel Sharon set foot in the compound for the first time, the Aqsa Intifada was sparked, lasting five years. What distinguished it from previous uprisings was the extent of armed resistance by the Palestinians against occupation forces. Almost 4,500 Palestinians were killed in defence of al-Masjid al-Aqsa and almost 50,000 others were wounded.[5]

Ali Abunima of the Electronic Intifada blog told Al Jazeera that what Trump’s move achieves is “truth in advertising”.[6]

“It is a more honest expression of American policy, which is to support Israel unconditionally, including Israel’s illegal colonisation and settlement-building in East Jerusalem… This has effectively been US policy for many, many years and Trump is simply coming out and being open about it.”

Share. Facebook Twitter LinkedIn Email Telegram WhatsApp
Previous ArticleA History of Islamic Law
Next Article Al-Quds (Jerusalem) is an Islamic land and no one can change that reality