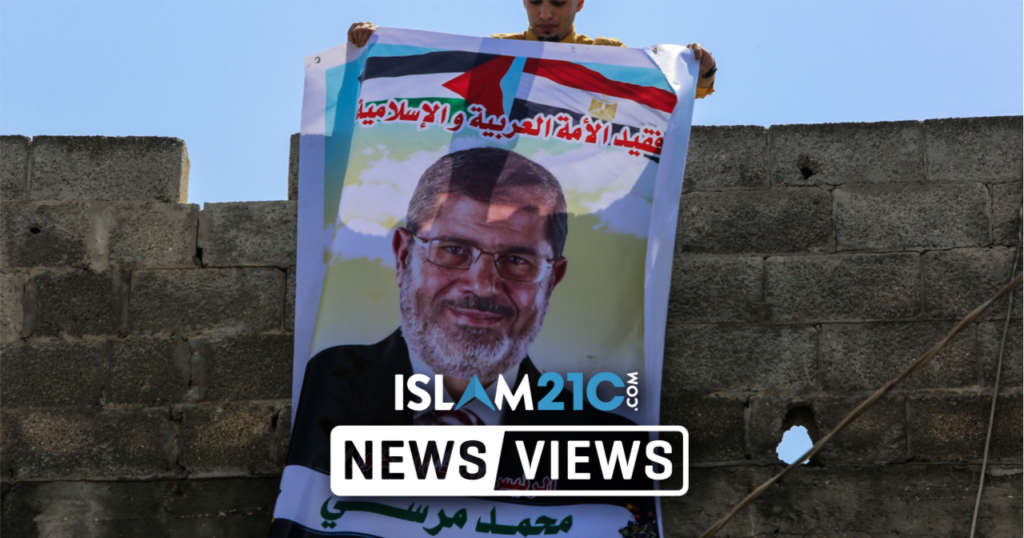 Morsi can be spotted with his arms raised in the air in solidarity with the besieged enclave, a sentiment that much of his short presidency from 2012 to 2013 had echoed.

Muslims across the UK have come together to answer his call, setting up a continuous charity ‘Sadaqah Jāriyah’, dedicated to his soul, in hope that the People of Gaza can be provided water for life.

The initiative, launched by Islam21c at the auspices of Muslims in the UK, has climbed to around nearly £10,000 and has attracted dozens of donations. The fundraiser, set up in collaboration with Human Appeal, aims to give thousands of Gazans access to clean drinking water.

Why Sadaqah Jāriyah in Gaza

Morsi won Egypt’s Presidential Election in May 2012, with over 13 million votes. Just a few months into his presidency, in November of the same year, ‘Israel’ launched operation ‘Pillar of Defence’, landing hundreds of airstrikes and killing over 100 civilians.

But unlike previous escalations, Egypt took an unprecedented and decisive stance against the Zionist aggression. Morsi himself addressed crowds affirming, “we will not leave Gaza alone. The Egypt of today is very different to that of yesterday…”, referring to the escalation as a “heinous assault” and that if the Zionist war machine were to continue, it should prepare to face “the rage of the [Egyptian] people and its leadership.”

Only one week into the assault and ‘Israel’s’ aerial fleet was grounding, its 75,000 reservists withdrawn. Egypt’s pivotal role stifled ‘Israel’ from carrying out a massacre similar to that of 2008, but in a defiant show of courage and resolution to follow those words with action, Morsi dispatched a high political delegation, including then-Prime Minister, Hesham Qandil, whilst the airstrikes were still pounding the strip.

During the escalation, Morsi ordered the immediate withdrawal of Egypt’s ambassador to Tel Aviv and the streets of Cairo were throbbing with protests. What seemed to be leading towards an inevitable severance of historic diplomatic ties between Egypt and ‘Israel’ was crucial to thwarting the aggression. Immediately following the assault, Morsi demanded the unrestricted opening of the Rafah border crossing, allowing hundreds of humanitarian activists unhampered access. [1]

During Morsi’s incarceration, coup authorities, through their apathy or direct facilitation, would oversee ‘Operation Protective Edge’. The massacre would instead last seven weeks and claim the lives of the more than 2,200 civilians. The intensity of the war and the colossal damage resulting from the blitz was such that nearly 400,000 Gazan children required psychological support. [2]

In the aftermath of the 2014 war, nearly half a million Palestinians were unable to access municipal water due to destroyed infrastructure and low pressure. Sewage was freely discharging into people’s drinking water. By 2018, the economy was “in free fall”, drinking water was widely contaminated, and the healthcare system was on the verge of collapse causing the UN Special Rapporteur to conclude that Gaza has become “unliveable”. [3]

Gaza and the rest of Palestine Mourned Morsi’s Death

In what activists saw as validating the unmatched headway that Morsi’s administration provided the Palestinian cause, thousands of Gazans took to their streets and homes to mourn his death. Funeral prayers in absentia were conducted in almost all of Gaza’s masājid.

Masjid al-Aqsa in occupied East Jerusalem, furthermore, held prayers after ‘Isha on the day of Morsi’s passing away. [4] According to the spokesman for the Office for the Information of Prisoners, Ali al-Maghribi, even Palestinian prisoners in Zionist prisons conducted absentia funeral prayers. [5]

Let us fulfil his dream and provide pure water for thousands in Gaza as a Sadaqah Jāriyah for him, in shā’ Allāh! Join the many who have supported the Morsi Gaza Water fund already!