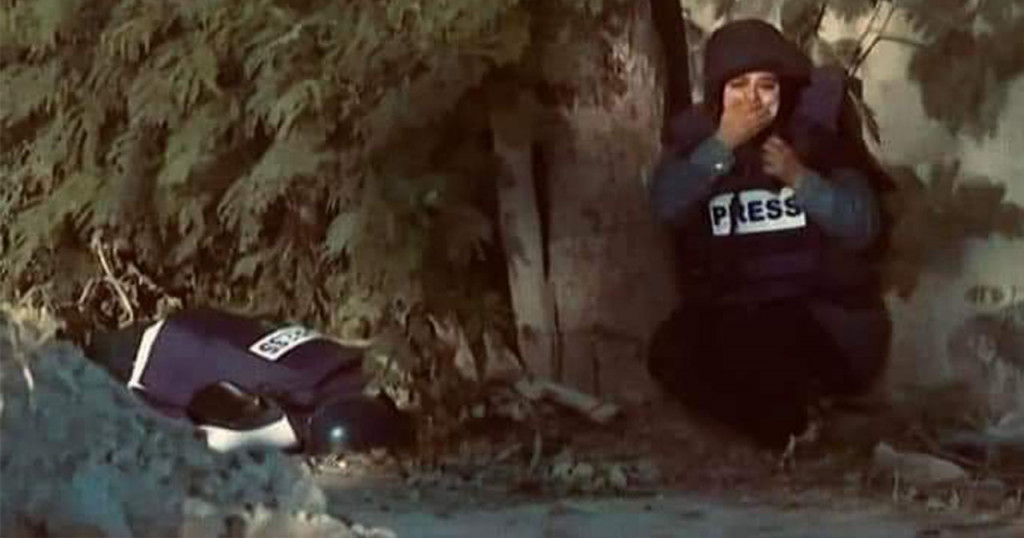 The veteran journalist was killed by sniper attack while covering Israeli militant raids in refugee camps of Jenin, whilst she was wearing a press vest standing with other journalists.

Ali al-Samoudi, another Al Jazeera journalist, was also shot in the back, who is now in stable condition.

Abu Akleh has survived multiple attempts on her life in the past, and the assassination comes almost exactly a year after the Zionist occupation targeted The Associated Press news agency bureau and Al Jazeera’s offices in Gaza.[1]

The news network condemned the assassination “in cold blood” and called on the international community to take action:[2]

The syndicate stressed that the crime of the occupation that targeted Abu Akleh is “a deliberate and premeditated act and a true assassination operation”.

It called on a clear move to protect fellow journalists from the “continued incitement and killing practiced by the Israeli occupation and all components of the occupation”.[4]

The EU delegation to Palestinians has also expressed “shock” over the killing of Abu Akleh, calling for “a swift and independent investigation to bring the perpetrators to justice”.

“Imperative to ensure the safety and protection of journalists covering conflicts,” the statement added.

Eyewitness and fellow journalist Shatha Hanaysha reported that journalists in the scene were pinned down by snipers when Abu Akleh was shot. She told Al Jazeera:

“We stood together in a collective way as journalists, then we started moving. We were shocked by the live ammunition fired at us, we reached an area that did not allow us to withdraw.”

“We were just facing the snipers. If they were not really willing to kill some of us, they could have started shooting before our arrival in this narrow area. I see this as a clear assassination of journalists,” she said.

The US Ambassador to the last remaining European colony in the Middle East also called for a probe into the killing.

Shakir went on to describe Israeli investigations as a “whitewashed mechanism”.

“When news of crimes is reported, Israeli forces regularly say they’ll investigate. The reality is there is no accountability for those sorts of abuses when it comes to actions by the Israeli authorities.”

Share. Facebook Twitter LinkedIn Email Telegram WhatsApp
Previous ArticlePrevent experts call on Charity Commission to investigate Policy Exchange after condemned report
Next Article 10 Years Ago Our Colleague Was Abducted in Pakistan. His Wife & Children Still Don’t Know Where He Is.