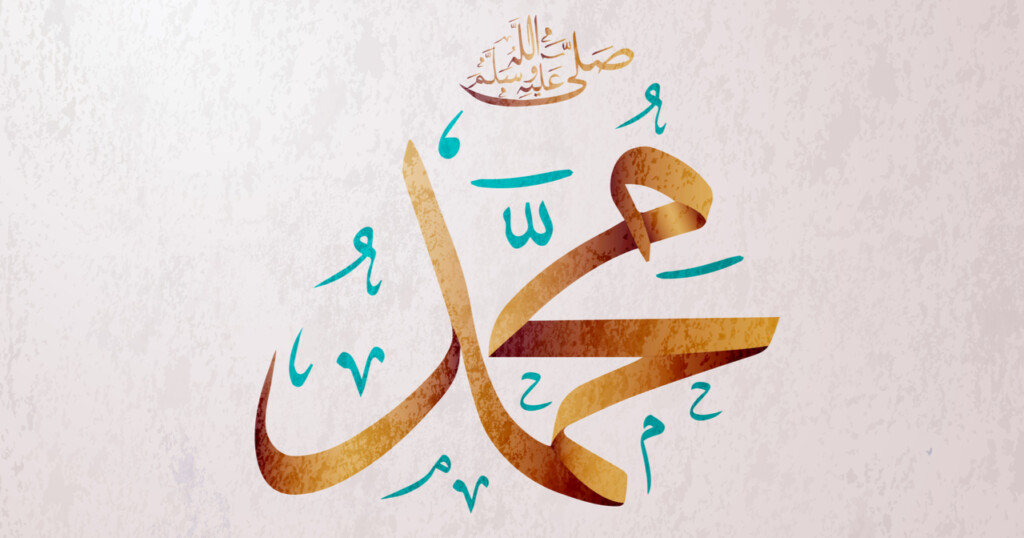 The caricature controversy keeps rearing its ugly head, this time after the murder of a French teacher for showing degrading caricatures of the Prophet Muhammad ﷺ.

Every time a Muslim reacts with violence in response to these despicable caricatures, a wave of support for the caricatures spreads across the world in defence of freedom of speech. This is very unfortunate.

Why is the Prophet Muhammad ﷺ caricatured?

The “bomb in the turban”

The drawing by the Danish cartoonist Kurt Westergaard, where the Prophet ﷺ is depicted with a bomb in his turban with the Islamic creed (shahāda) inscribed on it, makes one question why he is portrayed in this way. There were no bombs at the time of the Prophet ﷺ, so how can this be a criticism of him? What is the context behind this image? Evidently, there is no visible context whatsoever. The message one is left with is that Islam, bombs, and terrorism are all one and the same, and that Muslims are dangerous.

Where does this caricature come from? Some Muslims are seen committing terrorist attacks, but instead of blaming only these terrorists individually, one wishes to blame all Muslims. To substantiate that all Muslims support terrorism, the Prophet ﷺ is caricatured with a bomb in his turban as a symbol of the inner faith of Muslims.

The obvious message is that all Muslims – at least if they are “good Muslims” – either openly or secretly (through “taqiyyah”) support terrorism.

Therefore, the drawing is Islamophobic

The drawing is a clear Islamophobic racist cartoon, and the reason behind this is that it conveys an extremely negative stereotype that Muslims are terrorists. This is supported by the following arguments:

Can the message be explained away?

It is also necessary to emphasise that Westergaard tried to explain away the cartoon as a symbol of terrorists taking the Prophet ﷺ and the religion as a hostage. But, since the drawing from the beginning has been conveyed as a caricature of the Prophet ﷺ, and not one of a terrorist, this is not a credible explanation. Therefore, the drawing remains Islamophobic.

To further exemplify it: If a Nazi makes an anti-Semitic drawing that shows that Jews exaggerated the Holocaust, and the cartoonist says that the drawing is really only meant to criticise some Jews who make too much fuss about the Holocaust, this will be rejected. Why? Because the drawing must be able to convey a meaningful message by itself, without it having to be explained away. If the drawing itself promotes a racist, anti-Semitic, or Islamophobic message, then that is exactly how it should be understood, regardless of how the cartoonist later explains away his intentions.

What about other caricatures of the Prophet ﷺ?

Similarly, when the Prophet ﷺ is caricatured as, for example, a misogynist, the indirect message is that everyone who follows the Prophet ﷺ – namely, all Muslims – abuse and discriminate against women, at least if they are “good Muslims.”

Any caricature of the Prophet Muhammad ﷺ that promotes a negative stereotype of Muslims will be Islamophobic because the Prophet ﷺ represents all Muslims.

Aren’t the caricatures a critique of religion?

The caricatures of the Prophet ﷺ do exactly this because they portray the symbol of the ideal Muslim as a terrorist and misogynist, without showing any real historical context. The context is crucial for distinguishing between criticism of religion and Islamophobia.

Therefore, the caricatures are Islamophobic, in line with claims such as Muslims inwardly support terrorism, good Muslims oppress women, or that Muslims secretly want to conquer Europe, etc. This is the same rhetoric found in right-wing extremist circles and organisations that promote the idea that to be a good Muslim, one must support terrorism, murder, and the oppression of women.

Should the caricatures of the Prophet Muhammad ﷺ be defended as freedom of speech?

The distinction between criticism of religion and Islamophobia is crucial in this debate. Precisely because this distinction has not been clear enough, we see that many defend Islamophobic caricatures in the name of freedom of expression.

Islamophobia is still a new concept for many, so it is important to point out that Islamophobia is a branch of racism. When we see these caricatures in the context of Islamophobia, it is easier to see the moral reprehensibility of saying that Muslims must tolerate being portrayed in this way. For instance, we would not say that Jews must tolerate caricatures of Moses being portrayed as a greedy man with a big nose (a typical anti-Semitic stereotype). It is morally reprehensible to make such anti-Semitic portrayals of Moses a symbolic struggle for freedom of speech.

But it has taken the world many years and many lost lives to really understand the dangers of anti-Semitic propaganda. We must learn from the mistakes of history. Now, in 2020, we understand the phenomenon of Islamophobia much more than society did in 2005 when the caricature controversy first started.

Fahad Qureshi was born and raised in Norway. He has a bachelor’s degree in engineering from Oslo Metropolitan University and studied Arabic in Egypt. He is the founder and chairman of the Norwegian Dawah organization Islam Net, and is currently involved in establishing a Mosque and Dawah center for the Muslim community of Oslo, Norway.