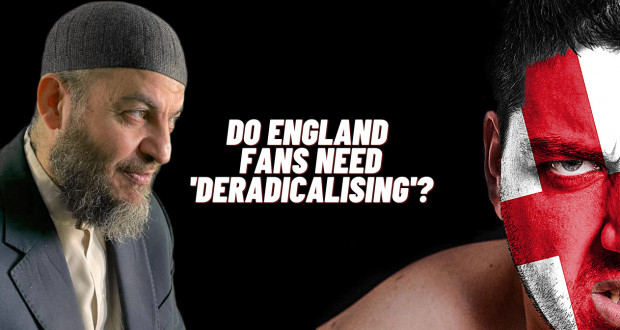 Sunday was expected to be an exciting day for the people of England. The national team had reached its first international final at the senior level in 55 years. Without any doubt, enthusiasm was understandably high. Unfortunately, it so happened that the game – which was eventually won by Italy – became more than just simply a football match.

It is reported that nineteen police officers were hurt during a number of fiery riots, which were sparked by English supporters both during and after the match. Black members of the team were also subjected to a barrage of racist abuse, with there being reports of hooligans attacking and beating people at random. This was hardly surprising, considering the fact that the symbolic “taking the knee” against racism on the part of English players resulted in boos from some portions of the England-supporting crowds. What further aggravates the matter is that these racist crowds were defended by some sectors of the elite media and political establishment.[1]

Among all the criticisms and condemnations that followed, one thing became clear: this behaviour was expected. While it is true that not every football fan displayed such racist antics, the fact remains that the wave of racist behaviour is symptomatic of a well-entrenched and historical problem.

Perhaps the fact that political elites condone this type of behaviour in subtle (and sometimes not-so-subtle) ways is the reason why sociologists and so-called “radicalisation experts” fail to study this dangerous behaviour of numerous young men in British society. This tidal wave of racist behaviour cannot be looked at in isolation from historical events, as if it is simply a frustrated reaction to losing. All teams lose, and of course, all teams have fans who are racist as well. But this goes beyond that.

What is it about English fans that orients many of them towards this type of behaviour? Why do so many men have a lack of tolerance towards others? Why do so many of them produce such imbalanced and emotional reactions when it is expected of reasonable people to react in a mature and honourable way? Why is violence and harming the rights of others so easy for many of these people? Even their own wives and loved ones are not safe. As is well-known now, there is always a common yet tragic spike in domestic violence after England football matches, with an average rise of 38 percent reported in previous World Cups.[2]

Can these people be “deradicalised”?

We do not want to replicate the blatant racism and fables found in Muslim “radicalisation” theories and impose them upon others, as that would be unjust. However, at the same time we do need to study this troubling phenomenon, which gives English fans a disproportionately bad reputation across the world. We need to analyse and pinpoint the personal, educational, societal, and even political drivers of this type of behaviour.

It is easy to invoke the slogan of “Islam is the answer” in such circumstances. However, Islamic tarbiyyah (religious nurturing and development) actually requires that we first carefully understand our contextual setting, and then impart our teachings to the given individuals and societies. Subsequently, the process of delivering tarbiyyah does not have a one-size-fits-all approach. Of course, if some of the major norms of the Shariah were implemented they could indeed alleviate many of these problems, at least at a theoretical level. For instance, the removal of alcohol from the equation could clearly address some problems. However, we need to delve deeper to determine and address the specific effects that our country’s media, culture, history, state education, and other variables have. It is the combined effects of these different factors which produce such people. If left unaddressed, such variables will continue to freely operate and erode the social bonds that a nation needs in order to survive. Even Muslims in such an environment will act like those around them when placed in the same context.

We find some people who convert to Islam after already being immersed in the dominant culture around them, and then fail to go through a deep tarbiyyah process to “deradicalise” themselves, eliminate past prejudices, and refine their character. In such cases, they will exhibit the same behaviours as before, but they will now execute their actions in the name of Islam instead. Only then do these problematic actions get picked up by policymakers and the media, that is, when they don the labels of “Islamist” or “Jihadist”. This selective condemnation is intentionally done by the dominant elite and its agencies, as it helps to perpetuate existing stereotypes. Of course, the real problem is not found in orthodox Islamic beliefs and practices. Instead, the root problem lies in the bad tarbiyyah received from the culture around them before Islam.

Why else would these individuals literally have to order books like Islam for Dummies and Koran for Dummies from Amazon before carrying out their acts?[3] Why else would MI5’s own behavioural sciences unit determine that “far from being religious zealots, a large number of those involved in terrorism do not practise their faith regularly. Many lack religious literacy and could be regarded as religious novices”. The same intelligence unit had to admit in the past that “a well-established religious identity actually protects against violent radicalisation”.[4]

It is unfortunate that these types of stereotypes are woven into the broader racist War on Terror discourse, which pays little regard to truth and academic accuracy. However, we should still be able to see past these biases and instead focus on the core of the issue. The problem consists of the historical, cultural, political, and educational variables of British society which produce individuals who carry out violent, intolerant, and tribalistic actions against a perceived “other”. Such violent behaviour is often manifested when these people face challenges in life. This includes Muslims from immigrant backgrounds, who may opt to follow these features of pre-Islamic ignorance (Jāhiliyyah) over Islamic ethics and values.

I reiterate that this does not mean we are being overrun with such people or that they even represent the majority. But what is concerning is that many in the media and political establishment are all-too-willing to overlook these dangerous tendencies. In many cases, they even promote these acts of injustice for the sake of attaining short-term gains and alliances.[5]

Islam desires that people refine their nafs (self ego), and have the fortitude to control their emotions and behaviour. That way, one will be able to think about their impulses and ideas before acting upon them. If we do not implement this Islamic tarbiyah within ourselves and people in wider society, then the dominant narrative of instantly gratifying one’s desires and impulses will take society to a level which Allah has warned us about:

“Have you seen he who has taken as his god his [own] desire, and Allah has sent him astray due to knowledge and has set a seal upon his hearing and his heart and put over his vision a veil? So who will guide him after Allah? Then will you not be reminded?”[6]

Previous: ECJ rules hijab can be banned in workplaces “under certain conditions”
Next: Sh Kamal El Mekki Gets Explicit! | Unscripted #86