As Mohammed bin Salman pivots further in a Sino-Russian direction, what could this mean for traditional oil-for-security relationships with the US and the wider region?
Opinion 20/01/2023No Comments5 Mins ReadBy Ahmed Jeddo 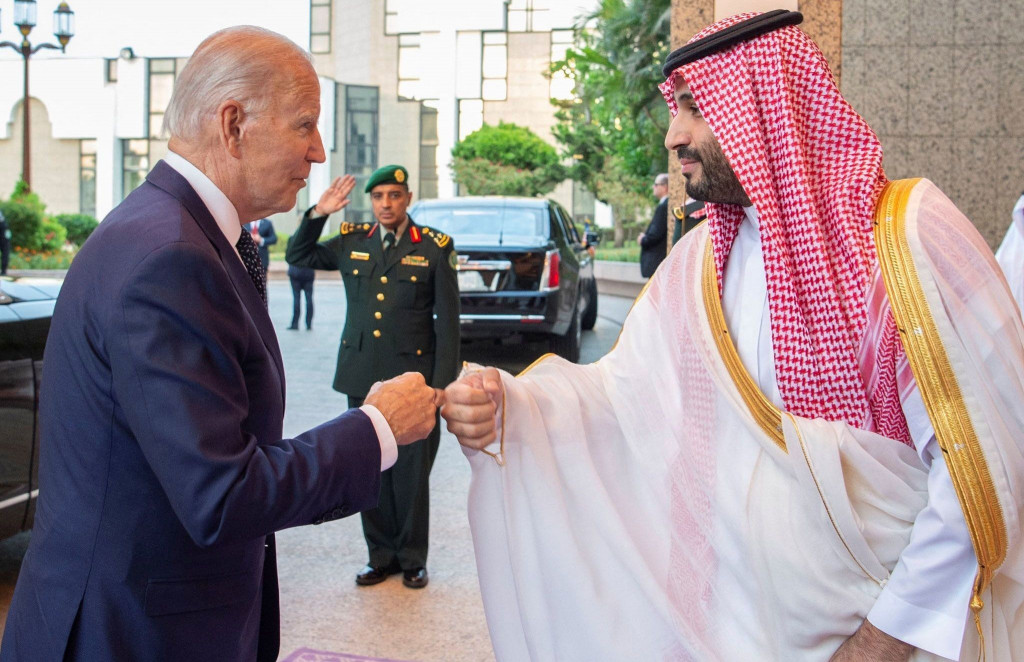 Despite the frantic lobbying efforts of the Biden administration, the Saudi-led Organization of the Petroleum Exporting Countries (OPEC+) announced on 5 October 2022 that they would cut oil production by two million barrels a day. President Biden – feeling the rising pressure of low approval ratings and rampant inflation – exclaimed that “there would be consequences” for Saudi Arabia’s perceived insolence.

The OPEC+ cut was also met by a deluge of bipartisan outrage from US policymakers; Democratic Congressman Ro Khanna claimed that Saudi Arabia was “actively fleecing the American people” and there were growing calls to pass a “NOPEC” bill that would revoke the sovereign immunity that has protected OPEC+ members and their national oil companies from lawsuits.

Given that the heavily anticipated red wave in the US mid-term elections on November 8 became no more than a red ripple, how exactly will the Democratic establishment now seek retribution for Saudi belligerence?

Is the current anti-Saudi rhetoric nothing more than political posturing, or are we witnessing the terminal decline of an alliance that has been pivotal to both Saudi and US interests since the end of the Second World War?

Many have been quick to assume that the oil supply cuts are an indication that the Crown Prince of Saudi Arabia, Mohammed bin Salman (MBS), has allied himself with Russia in the ongoing conflict in Ukraine; and that the supply cuts have increased oil revenues for Russia, in turn helping fund the war effort.

Others postulate that this is the machination of a Crown Prince with a fragile ego, angered by Biden’s campaign trail pledge that he would “make Saudi Arabia a pariah”.  This, then – as it is assumed – is the Crown Prince’s moment of sweet revenge against a President reeling in the face of political turmoil at home.

However, given the opaque nature of Saudi governance, the discussions surrounding MBS’ intentions can never transcend mere speculation.  Rather, it is what this action represents for the hegemonic struggle in the region that must be examined.

From an economic standpoint, the oil cuts represent nothing more than pragmatism in an era of great instability and financial turmoil.

The global economic outlook is perilous with analysts forecasting global demand to decline ever further, as the dark clouds of recession loom in the horizons of 2023.  If these projections are accurate, oil prices will inevitably fall in response to the reduction in global demand. From this perspective, OPEC+ are simply protecting the stability of oil prices in a time of global uncertainty.  Saudi Arabia has affirmed this position in numerous public statements.

However, the US Co-ordinator for Strategic Communications, John Kirby, contends that the kingdom strong-armed other oil-producing countries to agree to the cuts. Kirby made the bold claim that other members of OPEC+ privately disagreed with the move, but felt coerced to accept.

Considering Russia is the co-chair of OPEC+, US officials feel justified in their claims that Saudi Arabia has taken sides in the ongoing war in Ukraine.

To further understand Saudi Arabia’s evolving patterns of behaviour, there are two key factors that may profoundly affect the future of a region that remains at the heart of the global power dynamic.

The first is the scaling down of US involvement in the Middle East, since the presidency of Barack Obama.

In the aftermath of the Arab Spring, the US adopted a less interventionist stance in the region; fears of military entanglements akin to Iraq and Afghanistan played a large part in this policy shift.

The second factor is the meteoric rise of MBS since 2015, alongside the centralising of power into his hands.

Unlike his predecessors, MBS is far less reluctant to make decisions that may come into conflict with US interests in the region. This, more independent foreign policy, has led to closer ties with the United States’ two biggest rivals to its global hegemony: Russia and China.

The apparent US disengagement from the region has opened up opportunities for Russia to deepen its involvement, most notably, in areas like Syria.

To the growing concern of Saudi Arabia, Iran has also taken advantage of this vacuum by increasing its influence in states such as Iraq, Syria, and Lebanon.

Given this political backdrop, MBS is keenly aware of the necessity of fostering closer ties with Putin, if his country is to reaffirm its position as the dominant regional hegemon. And as for China, not only are they the recipients of more than a quarter of all Saudi oil exports, but MBS has singled them out as a key investor in Saudi Arabia, particularly as Vision 2030 becomes the centre-piece and symbol of his modernising ambitions. The mutual benefit of this relationship will only increase with time as Chinese energy demands increase and the Crown Prince’s bombastic vanity projects proliferate.

This diversification of Saudi alliances casts a creeping shadow upon the traditional oil-for-security relationship between the kingdom and the US.

Whilst it is premature for any grandiose claims of an end to an alliance that has defined the region for more than seventy years, the calculus of its mutual benefit is in flux.

Both Saudi Arabia and the US are acutely aware of this changing dynamic, casting an underlying tension between two states still in need of one another. At what point this comes to a head is a matter of blind conjecture, given the multiplicity of variables at hand.

However, it is more interesting to consider that much popular anger, frustration, and militancy over the past century has been fuelled by, and directed towards the West, because of its perceived interference in the Muslim World.

As Western influence begins to wane, and the grievances of the Muslim populace continue, where, now, will that frustration be directed?

Ahmed Jeddo is an independent researcher who has a BSc (Hons.) in Economics from the University of Kent, and is currently undertaking an MSc in Politics of the Middle East at the School of Oriental and African Studies, London.