In the first of a two-part series, Modi cuts a "menacing figure" who at best did nothing to prevent the Gujarat riots, and at worst was "directly responsible" for 1,000 Muslim deaths
News 19/01/2023No Comments5 Mins ReadBy Shaheer Choudhury 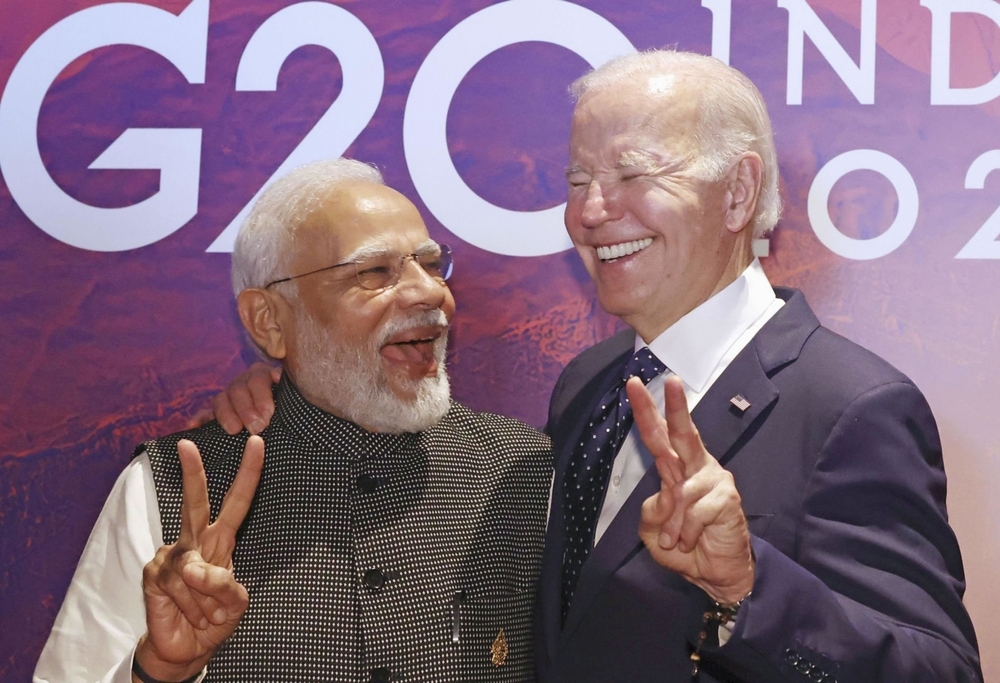 US President Joe Biden may have moved on from Modi’s murderous past, but we will continue to highlight his bloodstained politics. Editorial credit: Salma Bashir Motiwala / shutterstock.com

On Tuesday evening, the BBC aired the first episode in a two-part documentary that takes a detailed look into the Gujarat riots of 2002, the events preceding and succeeding the deadly violence that resulted in approximately one thousand Muslims killed, and the man whom many lay ultimate blame on, for fuelling, perpetuating, and capitalising on politically. [1]

Reflecting on the European-inspired formation of the fascistic paramilitary entity, the RSS (Rashtriya Swayamsevak Sangh), in 1925, the first part of India: The Modi Question touches on key aspects of Narendra Modi’s ascent to the peak of Indian politics.

Here are six key takeaways from the series’ first episode:

The first part of the series reveals that the British government – with Jack Straw as Foreign Secretary during the 2002 Gujarat riots – initiated a classified review to get a clearer understanding of the facts.

It is understood that a team was dispatched to India, with an anonymous diplomat stating during the production that not one but two thousand died in the violence, in addition to a clear understanding that Modi – as Chief Minister of Gujarat state – told the authorities to allow Hindus to “vent” following the deadly Sabarmati Express train fire.

“The findings of our investigation still stand. 2,000 people were murdered in Gujarat in 2002, in a campaign of violence that was clearly well organised – that remains a fact.

“Now Mr. Modi is in power, it seems to me that history is being rewritten.”

The 27 February 2002 Godhra train fire that resulted in the deaths of 59 Hindu pilgrims remains a flashpoint for communal tensions and the cause of the fire remains disputed.

According to the programme, the subsequent report by the British government damningly held Modi “directly responsible” for the riots. [2]

For a country that prides itself on being rid of its one-time colonial master, the British Empire, the violent elements of the Hindu population in India have also taken a great deal of inspiration from the likes of Nazi Germany and the Italian Fascist Party.

In addition, the documentary details how, with the formation of the RSS nearly one hundred years ago, the voluntary organisation has developed a boy scout-type appearance that can appear innocent.

However, the RSS often targets young boys for recruitment because their “malleable” character allows them to be trained as desired. This, in a large part, is what the RSS has utilised with great success, in culturing generation after generation of extremist thinkers.

From enrolling in the RSS at eight-years-old, Narendra Modi successfully went up the hierarchical ladder while establishing himself as a permanent member in the late 1960s.

After relocating to the headquarters of the Gujarat RSS at Maningar, Ahmedabad, he studied under the guidance of Lakshmanrao Inamdar. A founder of the RSS, Inamdar is regularly credited with being Modi’s political mentor.

Gaining promotion to pracharak (full-time missionary) in 1972 and to vibhag pracharak (head of a local RSS division branch) in 1978, Modi has spent an entire lifetime fusing his upbringing through the RSS belief system with political aspirations to dominate India and govern by what he truly believes to be the only suitable way – Hindu ethnonationalism.

During a hugely controversial 2005 visit to the United Kingdom, then Chief Minister of Gujarat, Narendra Modi was the target of a legal case brought forward by Imran Khan, solicitor for the families of three British-Indian Muslims who had been tortured and killed by rioting mobs in 2002. [3]

Panicked by the reports, Modi was reportedly advised by British government sources to hasten to catch the next flight back to India.

His anticipated arrest for crimes against humanity ultimately failed after judges said that witness statements were required before a warrant could be issued. This was in spite of hundreds of reported documents being presented to the court. [3]

The families of slain Yorkshire brothers, Saeed and Shakil Dawood, and their neighbour, Mohammed Aswat Nallabhai (raḥimahum Allah), were left disappointed with the missed opportunity.

5 | World powers change their tune as time goes by

Initially, the riots of Gujarat caused consternation among countries such as the US, UK, and elsewhere.

However, despite such dramatic steps as a US visa ban, UK government sources pressuring Modi to rethink making a trip to Britain, and statements condemning the violence, many in the West now see Modi as an essential ally in countering a growing threat from China, Russia, and to a lesser extent, Iran.

So much for having the blood of thousands on his hands, Narendra Modi has managed to repeatedly slither his way through the net and only take on higher positions of power.

While he continues to lead his Bharatiya Janata Party and push ever further towards a clear genocide against Muslims in India, we cannot lose our focus.

To put it plainly, Modi is a killer of Muslims, and he is not afraid to lie or distort the truth in order to push his ethnonationalist agenda.

This is the new BBC documentary the Indian government tried hard to kill – because it reveals in clear detail Modi's leading role in the genocide of Muslims in Gujarat. https://t.co/ZCjRFx3BOK