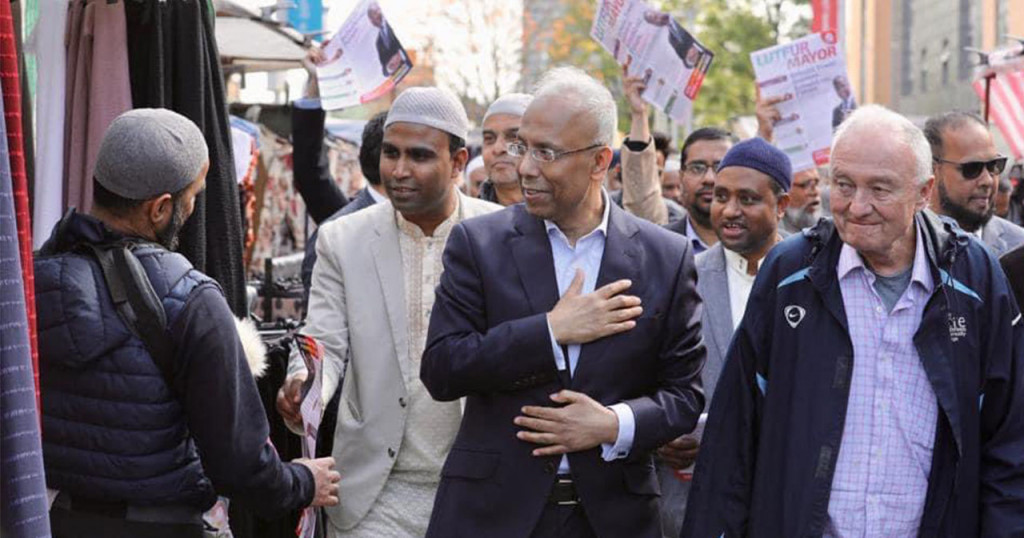 Since Luftur Rahman, a British Bangladeshi Muslim from Tower Hamlets, won the borough’s mayoral election after being banned from standing, I have been in complete shock. I couldn’t stop praising Allah when I heard the news. When I went to cast my vote for his party, Aspire, I wasn’t hopeful that they would win the election at all.

The reason for this was that in 2014, he was targeted by the BBC Panorama programme, which accused him of misusing public funds, sparking an investigation against his administration by the former Communities Secretary, Eric Pickles.  This set the ground for a bigger plot.

It is not a coincidence that in the same year, the infamous Birmingham Trojan Horse Hoax letter was leaked to the British Media after being passed to the Home Office and Department for Education. This caused mass racist hysteria that “foreign” Muslims were taking over British institutions, fuelling the Islamophobia industry with some calling him names like “Ayatollah”.

Two years later, Eric Pickles took over Tower Hamlets Council after an inquiry in which he described Luftur Rahman’s administration as a “medieval monarch” and “at best dysfunctional, at worst riddled with cronyism and corruption”.  In the same period, four residents petitioned to Government to take Lutfur to a Specialist Electoral Court to overturn his victory.

After a ten-week hearing at the Royal Courts of Justice, Lutfur Rahman’s 2014 election victory was rendered void, handing him a five-year ban from standing in elections in the process—based on a 19th-century law designed “to keep Irish Catholics in their place”.[2] Even though the Specialist Electoral Court gave its verdict, according to the Metropolitan Police, there was no evidence to incriminate Luftur Rahman.[3]

With all the plotting and scheming against Lutfur Rahman, I couldn’t help but recall the āyah, “And they planned, but Allah plans. And Allah is the Best of planners.”[4]

The plots could not sway the public’s opinion on Lutfur Rahman. Hours ago on Friday 6th May 2022, Luftur Rahman won a by a landslide of 40,000 votes to 27,000 votes for Labour Mayor John Biggs. Whatever the critics think, as Luftur Rahman mentioned in his victory speech, “the people of the borough gave their verdict”.

This is a victory for the entire community.

Not just for Muslims, but the entire community. I know personally people from various faiths that went out to vote for Luftur Rahman. Why? Over the years, residents have seen Tower Hamlets being carved out and sold to private companies and all manner of cuts to essential services that impact everyone from children all the way to the elderly.

In Lutfur Rahman’s first term he built more social housing than all other councils,[5] in addition to extra financial support for low-income families. His team ensured young people could access education by providing allowances, and ensured all elderly provisions were free. These issues should not be seen as “secular” policies but are core aspects of our Islamic duty towards our neighbours and communities, not to mention these being issues that predominantly affect the Muslim community at large.

After seeing a victory for someone against whom so many odds were stacked it is easy for the mind to wander in sheer surprise and excitement to examples given to us in the Qur’an. The Prophets are of course in a league of their own, but the lessons of their stories do play out before our eyes again and again for us to take heed. Lutfur Rahman and his administration faced the brunt of the right-wing media establishment, the political establishment,[6] and even the judiciary—but Allah had His own plan. I couldn’t help but recall how Allah exposed the trickery of the Magicians of the Pharoah—who also gave the false semblance of a level playing field before the masses, which led to his downfall. Allah is slowly exposing the trickery of those plotting against Muslims who dare to step out of line and work for the betterment of their communities.

There are so many lessons to draw from this event. The clearest of that lesson is Allah is al-Hakam al-‘Adl, who judges between His slaves in this world and the Hereafter by His justice and fairness. Secondly, this is a good sign that Muslims didn’t become defeatists in mindset and show signs of weakness. We have full hope in Allah and have the conviction that victory is with Allah.

I ask Allah to make Lutfur Rahman sincere, keep him firm upon justice and be a means that benefits the community. Āmīn!