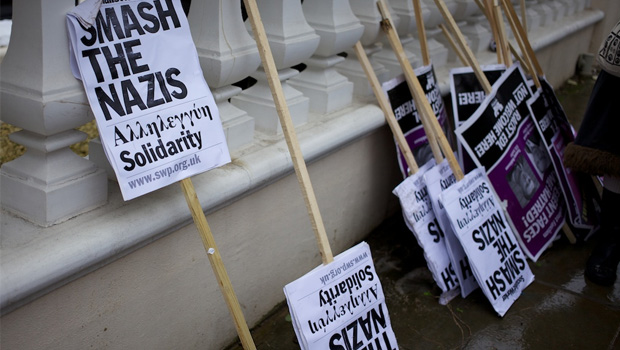 Douglas Murray is also on the board of governors. He has openly said that he would like “Conditions for Muslims in Europe must be made harder across the board”

Muslims in Britain are all too familiar with the activities of the English Defence League. As an organisation the E.D.L. tries to conceal its member’s vile racism as it aims to define itself as an anti-Islam/ anti-Shariah movement. In reality the E.D.L. are really just the proverbial monkeys of the Islamophobia Industry and the racist sentiments of their members on twitter and on their marches are regularly exposed by organisations such as Hope Not Hate. It has to be said that Hope not Hate have actually found themselves aligned with the far right in the past, one instance being last summer where they ran a campaign (which was cross posted onto the famously Islamophobic, Zionist NeoConservative blog Harrys Place) to have an event for Muslims families, called Islamia Village closed down and another Ziocentric campaign they ran against Gilad Atzmon the Jazz Musician and author – an exIsraeli and outspoken critic of Israeli policies. However, what most people fail to be aware of is that working hard at the highest levels are various lobby groups and think tanks that are the much more effective proverbial organ grinders in anti-Muslim fear mongering. These lobby groups and think tanks promote themselves as experts on current issues affecting Europeans, but a search through the papers written by their research fellows and experts reveals an obsession with Muslims and Islam. It is high time our Muslim academics and intellectuals engaged in countering this insidious attack which has been drip feeding Islamophobia for years to our governments. The sentiment of reports written by the likes of ‘Gatestone’ and other similar groups is increasingly reflected in how the mainstream media reports on issues relating to immigration and Muslims in particular for the last few years.

Take a look, at just one example, an article by Soeren Kern of The Gatestone Institute  and ask yourself what other than fear would this headline induce in the minds of European readers?

The article is about the increasing number of mosques in Germany who call the Muslims to prayer or Azan by loudspeakers [1]. Mosques in Germany need to gain Municipal approval to broadcast the call to prayer, so they do have permission. The particular case he writes about is in Wipperfuerth and prior to permission being granted the mayor met with leaders of the Protestant and Catholic Church for discussion on the issue and they are happy to show “peaceful coexistence between religions and culture”. The mayor says that “Wipperfuerth takes pride in being an intercultural and interreligious community.” Inevitably there are some townspeople who are not so happy; however, the fact that some mosques in Germany are broadcasting the azan hardly warrants the alarming headline.

Who then is Soeren Kern? Soeren Kern has a biography on the Gatestone website [2], but much more revealing of who Kern is and where his interests lay, just look at the list of articles he has written and the subject matter they cover. Almost every single article, going back to 2008 is about Islam. Kern writes on Muslim immigration in his article on the 31st May “Britains Islamic Future”[3] where he quotes from a report suggesting that Islam will become the dominant religion in the U.K. within the next generation. This is an issue that some “native” British people may be concerned about, however, much of the report is unsubstantiated. The following quotation from the report claims

“If current trends continue — a Muslim population boom, combined with an aging Christian demographic and the increasing secularization of British natives Islam is set to overtake Christianity in Britain within the next 20 years, according to demographers.

It is evident that if the trend of young “native” British people becoming more secularised were to continue, along with the demise of the older Christian population, it would inevitably lead at some point to Islam becoming the dominant religion with or without immigration because young Muslims are evidently still practising and identifying themselves with their religion of Islam. Surely the reality of declining numbers of Christians is a concern for the Christian clergy to address rather than making it solely an immigration issue? The report doesn’t give us any information as to the number of people in the U.K. who identify as Jews, Hindus, Sikhs or other religions than Islam. There are many other articles about the perceived Islamification of Europe, for example on Shariah law, which is used by Muslims to settle disputes between themselves where they chose to do so but, without mentioning that Jews have had access to settle their disputes  for decades; using Judaic law at the Beth Din. Kern is publishing such articles at a rate of one every few days.

What then is the Gatestone Institute? The Gatestone Institute website shows its Board of Governors include Alan Dershowitz – a Prof of Harvard and leading supporter of Israel. Derschowitz authored a book entitled ‘The Case for Israel’. Prof Norman Finklestein accused Dershowitz of plagiarising a well known book by Joan Peters called ‘From Time Immemorial’[4], Finklestein says “the book was universally recognized by serious scholars to be a fraud.” As Noam Chomsky explains ‘Here was this book which proved that there were really no Palestinians! Of course, the implicit message was, if Israel kicks them all out there’s no moral issue, because they’re just recent immigrants who came in because the Jews had built up the country.’ (Chomsky explains the struggle that Finklestein had to make given that the academia in within this field I the US were in lock-down.)[5]

Douglas Murray is also on the board of governors. He has openly said that he would like “Conditions for Muslims in Europe must be made harder across the board” [6] He is described on Wikipedia as a frequent critic of Islam. Yet he is much more than this; Douglas Murray intellectualises racism and is an enabler of groups like the EDL. It was the same Douglas Murray who in 2009 described Robert Spencer, the leader of a group calling itself “Stop the Islamization of America (SIOA)”, as a “very brilliant scholar and writer”[7]. A number of years before Murray saw fit to praise this “brilliant scholar”, the latter wrote that there was “no distinction in the American Muslim community between peaceful Muslims and jihadists. No wonder Robert spencer was banned from coming to the UK to join the EDL march in Woolwich. Protests led the Home Secretary to assert ‘His presence was not conducive to the public good’.

A look at Gatestone Institutes list of events past and future show they have hosted an even more alarming list of speakers including such cheerleaders for war as Daniel Pipes who wrote “Western European societies are unprepared for the massive immigration of brown-skinned peoples cooking strange foods and maintaining different standards of hygiene…All immigrants bring exotic customs and attitudes, but Muslim customs are more troublesome than most.”[8] They have also hosted John Bolton well known neo-con hawk and are not even ashamed to invite and listen to Geert Wilders.

As to the funding of the Gatestone Institute we are not informed as to where that might come from, but much like the Henry Jackson Society that Douglas Murray also belongs to, there is a definite Neo Conservative and Israeli Likud party Zionist agenda. Likud of course being the ultra-nationalist party in Israel.

Why do pro-Israel lobby groups and think-tanks invest so much time and effort to raise fears against Muslims in Europe and the West? They clearly have an interest in Muslims being seen as the root to civil strife in the world. The State of Israel portrays itself as being under constant existential threat by ”terrorist” Palestinians and Arabs who exercise their right to resist against occupation, it is worth noting that Israel has the 4th strongest Military in the world, so stone throwing Palestinians are not a real threat to Israeli Hegemony and neither are any of their neighbours. Furthermore the long-term security of Israel, in their mind, relies on a weakened Muslim populace globally. Whether that be a war with Iran which many in Israel have been brainwashed into believing is necessary or whether it by ensuring the British government remains sympathisers by stifling the progress of Muslims given the concern of their growing numbers and influence in the UK.  By any means necessary they seek to preserve their interests