#STAND4UYGHURS
Home / Analysis / Gaza: The Spark that Ignited the Ummah 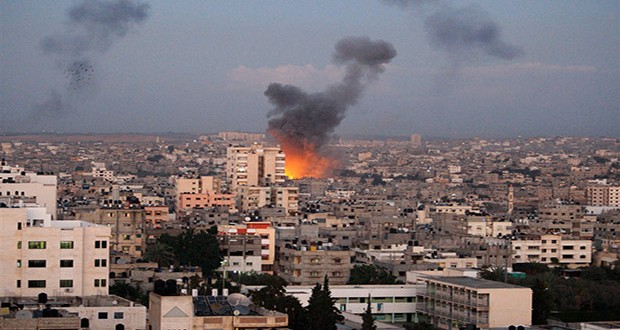 Gaza: The Spark that Ignited the Ummah

Gaza – the word that will forever remain etched in the hearts and minds of generations upon generations of people all over the world. For Muslims, it will be proudly remembered as the time when it became apparent that the pulse of the Ummah was still beating, albeit faintly, but beating nonetheless. Amidst the never-ending tragedy of oppression and humiliation that has now become the norm for the Muslim world, Gaza was solid proof that despondency could be replaced with hope, fear with courage and defeat with victory. When Muslims emerged in their hundreds of thousands onto the streets of capital cities all over the globe in response to the Israeli aggression, one could have been forgiven for dismissing it as emotionally-driven actions destined to rapidly fizzle out. However, when similar numbers were seen braving the arctic temperatures on a daily basis during the holiday season as they converged on Israeli embassies in their respective cities, it became apparent that these were no ordinary demonstrations. For the Muslim world, enough was enough. The people of Gaza were being pulverised before the eyes of a watching world. Day after day, night after night, the people let their voices be heard, doing whatever they could to show their solidarity with the people of Gaza. Young and old, mothers and children, religious and non-religious, all came out, many attending a demonstration for the first time in their lives, so outraged were they at the carnage that was taking place. Children distributed Boycott Israeli Goods cards to their parents, refusing to drink Coca Cola and eat in McDonalds, aware that some of their money could be used to further the Zionist cause. Others went a step further and smashed up Starbucks.

For the imperial powers and tyrannical regimes of this world, the very mention of the word Gaza will send shudders down their spines as they reflect upon how it united a divided Ummah and how it boosted the popularity of Hamas, not just in Gaza but across the world, both as a resistance movement and as the only legitimate democratically-elected government of Palestine. Right now, the superpowers of the world are slightly amused at how Gaza is celebrated as a victory despite the fact that over 1400 Palestinians were killed, thousands of homes destroyed and the infrastructure completely obliterated. For all practical purposes, it appears a brutal defeat. Yet it will soon dawn on them that Gaza will be looked back at as the moment when Muslims in the East and West realised that F-16s and Merkeva tanks cannot be effectively resisted with press releases and olive branches; that victory will only come through sacrifice; and that it is far better to die on your feet than to carry on living on your knees. The spirit of Gaza will live forever in the hearts of the Muslims for generations to come.
Every traveller who returns from that blessed land will expose the brutality and barbarity of the Israeli military which, even by its own depraved standards, behaved in a manner more akin to wild beasts than human beings. They will speak of the babies executed with single bullets by snipers while still in the arms of their mothers, and the parents gunned down as they broke curfew to rescue the remains of their babies’ bodies from the teeth of wild dogs. They will relate stories of how men like Anwar Khalil Balusha now suffer from serious mental health problems after having lost five of his young daughters during a midnight bombing by the Israeli air force, of how he and his neighbours desperately tried to rescue them with their hands from the rubble of their destroyed home until the sound of their terrifying screams became lower and eventually stopped.
They will discuss the massacre of the al-Samouni family in al-Zaytoun who lost 48 members over three days of torment. They will describe how when the Israelis finally allowed the Red Crescent access to the farm they found young children clinging to the corpses of their parents. They will testify as to the graffiti they saw written on the walls within the homes of Palestinians which the Israeli soldiers temporarily took over. Sporadically written all over the walls of the home were statements such as “Kill all Arabs” and “Death to Arabs” intermingled with the Jewish Star of David, exposing the racist psychotic mindset of the Israeli soldier. They will describe how these same soldiers desecrated copies of the Qur’an and left bags of their defecation in the homes despite there being functioning toilets present. They will lament whilst they recall the haunting eyes of the 13 year old girl who was made witness the point blank execution of her parents by the Israeli army.
These travellers returning from Gaza will bear witness to all these horrors and more. They will incite the Muslims with evidence about how nearly one hundred mosques were obliterated in targeted Israeli air strikes, often whilst worshippers prayed inside. They will illustrate how nothing was spared during the Israeli onslaught in an effort to keep the Palestinians so busy reconstructing as to distract them from resisting. Even the animals in Gaza zoo were not spared as monkeys and lions were executed at point blank range. Children’s playgrounds, museums, anything and everything that could function as a method of escapism from the torment of daily occupation was destroyed.
However, these same travellers will also narrate tales of courage, bravery and defiance. They will speak of the hospitality of the smiling people who despite having lost all they have, want to gift you with anything they have left. They will tell the world about the dignity of the children who refuse to have their picture taken or accept hand-outs but who realise that their destiny does not lie in the hands of the UN or the Arab League but in their own hearts and minds. For as long as these are not corrupted, they will be free – regaining their land will follow as an inevitable consequence. Most of all, these travellers will return inspired by the Gazan values of pride, courage and indomitable spirit. Their blood will not have been shed in vein but will fertilize the earth from which the plant of freedom will grow and blossom, the fruit of which will nourish the Muslim world.
The Prophet Muhammad (may the peace and blessings of Allah be upon him) said that Allah tests people in proportion to how much He loves them. The most tested people ever to walk the earth were the Prophets, showing how beloved they were to Allah. Today, at this moment in time, no people are being tested more than the people of Gaza – since they voted for Islam four years ago, they have been punished with economic sanctions, locked in a cage and experienced inhuman savagery at the hands of their oppressors. The entire world has betrayed them and yet they have remained firm on their religion and their beliefs. These incredible people will continue their struggle until victory or martyrdom. We should not feel sorry for them; they will be successful in this life or the Hereafter. We need to feel sorry for ourselves, for the deep slumber from which we refuse to stir. Our luxurious lifestyle in the West has deadened our hearts and we can barely muster up the courage to attend a demonstration against the atrocities. Allah has promised the oppressed victory and it will come – the question we must all ask ourselves is not when this victory will come but what part we will have played in it.
Gaza is defiance. Gaza is freedom. Gaza is victory.

[This article was first published in Crescent International (January 2010)]
Fahad Ansari is a lawyer who was sent as part of a delegation to Gaza by the Islamic Human Rights Commission in January 2009 to investigate allegations of war crimes. The IHRC  report, ‘Aftermath: Gaza in the days after the 22 day war’ can be read at http://www.ihrc.org.uk/file/9781903718599.pdf
2009-12-28
Fahad Ansari
Previous: Canopy of God’s Will
Next: In Search of Intellectual Charlotte