Palestine. And her dogs. 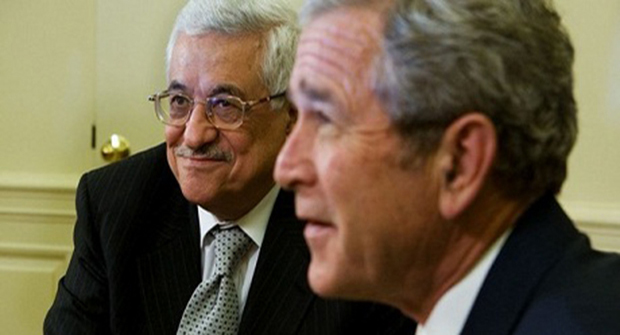 Earlier this week, the Guardian published the latest instalment of leaks, and not that the popular uprising in Tunisia wasn’t a surprise in itself, but the matter that is most sensitive to Muslims across the globe took an interesting turn. It seems, although not that surprising, that the Palestinian Authority (Mahmoud Abbas & Co) has been caught in bed with the Israelis and Americans once again, and this time the British also climbed in. It wasn’t that long ago that the Israelis and Americans were providing Fatah with weapons in order to kill off Hamas, elected through the democratic process demanded by those who rejected them. But revealed yesterday was that during the US supported murder of Hamas personnel[1], Fatah, in the form of PA personnel were not only selling out their people, but the entire Muslim ummah,

‘It is a picture that graphically illustrates the gradual breakdown of a process now widely believed to have reached a dead end. The documents reveal Palestinian Authority leaders often tipping over into making ingratiating appeals to their Israeli counterparts, as well as US leaders…Qureia’s comment echoed earlier private remarks by the Palestinian president, Abbas was recorded as noting “with pleasure the fact that Sharon considered him a friend, and the fact that he too considered Sharon a friend”, adding that “every bullet that is aimed in the direction of Israel is a bullet aimed at the Palestinians as well”…Erekat returned to a similar theme with the US state department official David Hale, saying he was offering Israel “the biggest Yerushalayim in Jewish history” (using the Hebrew name for Jerusalem), a “symbolic number of refugees’ return, demilitarised state… What more can I give?”…Livni is recorded confirming…that “the Israel policy is to take more and more land day after day and that at the end of the day we’ll say that is impossible, we already have the land and we cannot create the state”…Rice, had been even more dismissive… she said: “Bad things happen to people all around the world all the time.”’[2]

The Palestine Papers describe Mahmoud Abbas, Saeb Erekat, and Ahmed Qureia as a three-man show who are all but willing to sell their mothers for Israeli/American recognition. Indeed, it is clearly evident that they are willing to sign Palestine away, as long as they are accepted by the imperial masters. The trio, devotedly panting in harmony with tongues lolled out not only sold out their people but also their religion proposing a joint committee to take over the Haram al-Sharif/Temple Mount holy sites in Jerusalem’s Old City, ‘As to the most neuralgic issue – Haram al-Sharif/Temple Mount holy sites in Jerusalem – she declared: “If we wait until you decide sovereignty … your children’s children will not have an agreement.”’[3]

From the report, the bullying tactics of the Americans is patently obvious, a policy promoted by US Christian Zionists who have pushed hard for the handover of the ‘temple’ to the Jews, thus fulfilling the biblical requirements for the messianic return. The Jewish Zionists are, quite obviously, uninterested in Christianity but will readily utilise common beliefs to appropriate the land of the Palestinians, with Abbas & Co. seeming more than happy to oblige. Thus Allah says about miscreants such as these,

In explaining the verse, Ibn al-Qayyim writes, ‘there is a wonderful secret in resembling the one who chooses the fleeting world over the hereafter to a dog with its tongue out. The one who disregarded Allah’s signs and followed his desires did so due to his strong yearning (panting) for the world due to the disconnection of his heart with the hereafter. His yearning (panting) is like the incessant panting of the dog regardless of whether he is bothered or left alone.’[5] Thus we note that the Palestinian Authority will continue panting regardless of whether their offerings are accepted or not, and with slouched tongues they look for anything that has a semblance of acceptance – their tongues hanging from their mouths whilst the sound of their grotesque slobbering mutes the voice of reason, faith and courage. If there should be anything that we learn from this highlighted episode, we should know, in the least, that those who stand to make the word of God towering over all else will serve the Palestinian people no less than in sincerity and stand tall with dignity and honour refusing the enemies of God their endeavour to subdue the religion of truth and its adherents – is that not the distinction of Hamas over Fatah?

In discussing Hamas, I do not mean to articulate unrestricted support for Hamas and their every action, but surely any rational minded individual can evaluate the superiority of Hamas over other factions. In fact, the Palestinian Papers actually make palpably clear that ‘Hamas gets stronger every time the west criticises it’.[6] God says,

‘O you who believe! Guard your own souls: If you follow (right) guidance, no hurt can come to you from those who are astray. To Allah is your return; it is He that will show you the truth of all that you do.’[7]

And so Hamas will be the perpetual problem of Israel, for in dealing with an opponent that refuses to pant like a dog, one finds that one must compromise – something that Israel is clearly unwilling to do. Indeed, the mere fact that they (the Israelis) refused a handover of the Temple Mount is one more indication that the Israelis care less for theological concepts and instead intend to wipe out the Palestinian people by annexing all of the land. The religious notions used are nothing more than props used to portray a seemingly oppressed people, yet, as various Jewish historians[8] indicate, there are many myths to justify Israel’s modern history. Avi Shlaim writes, ‘Establishing the state of Israel in May 1948 involved a monumental injustice to the Palestinians. British officials bitterly resented American partisanship on behalf of the infant state. On 2 June 1948, Sir John Troutbeck wrote to the foreign secretary, Ernest Bevin, that the Americans were responsible for the creation of a gangster state headed by “an utterly unscrupulous set of leaders”.’[9]

It is this ‘gangster state’ that the British, who were initially complaining, now fully support. And in such support they have used illegal and fanatical tactics to insert a dog-like devoted leadership with Abbas at the helm whilst conspiring to murder the legitimate opposition (Hamas). We, as British citizens, completely denounce the actions of the British government who have acted as a terrorist state and demand that Palestine be given the government it has chosen – Hamas. We also call to account those who have sanctioned such despicable behaviour, such as Tony Blair, and demand that he be brought to account for this crime and the many others he has committed in the name of the British people.

We also call upon the Palestinian people to sanction any power afforded to Mahmoud Abbas and his cronies, to refuse them any authority, and to stand together as righteous and just believers against the ignoble enemy. Allah says,

‘But you will see those in whose hearts is a disease hastening towards them, saying, “we fear lest a calamity (from the enemy) should befall us”, but it may be that Allah will bring the victory or a punishment from Himself, so that they shall regret on account of what they hid in their souls. And those who believe will say, “Are these they who swore by Allah with the most forcible of their oaths that they were most surely with you?” Their deeds shall go for nothing, so they shall become losers. O you who believe! Whoever from among you turns back from his religion, then Allah will bring a people, He shall love them and they shall love Him, humble before the believers, mighty against the unbelievers, they shall strive hard in Allah’s way and shall not fear the censure of any censurer; this is the grace of Allah, He gives it to whom He pleases, and Allah is Ample-giving, Knowing.’[10]