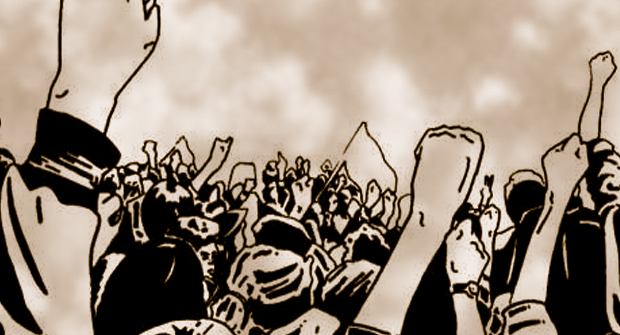 The protests on the streets of Egypt have captivated many for the past few days. Before then it was the scenes that unfolded in Tunisia that captured our imaginations. Protest, rebellion and revolution are in the air; dictators take note. Reporting from Sanaa on January 28th, James Swann and Catrina Stewart noted how, ‘tens of thousands of protesters took to the streets…to demand the end of the three-decade rule of the President in the latest sign of rebellion sweeping the Arab world.’ Indeed the winds of revolt (as the headline on their article reads) seem to be raging.
For so very long the cruel leaders of the Arab world have mocked and humiliated the populations they ruled. They are obvious markers of what is wrong with that part of the world. They are also the symbols which naturally garner most attention when the mood changes, as it has done in Tunisia and Egypt, so that the ire of the people quite naturally and rightly turns on them. ‘We want the regime to fall’ was the cry of crowds in Cairo, according to an article by Fisk published in The Independent today (29th Jan). And so it is the regimes that come to represent what is wrong with much of the Middle East and it is certainly hard to argue otherwise. Hosni Mubarak is an odious figure as was the ex-Prime Minister of Tunisia, Zine el-Abidine Ben Ali. Change then is something which part of the world most rightly deserves.
Change however is a difficult idea to pin down. In its normative sense change signifies an alteration that is different somehow to what preceded it. In times of revolution change connotes not just a move away from the past but also a positive progression from it. This compounded sense of change as occurs under the banner of revolution espouses two distinct modalities. The dominant modality of all revolutions is action, while the proper and necessary mode of progress is ideational. It is only when both are commanded properly that the change that revolution can potentially bring is managed as successfully as is humanly possible.
This of course underplays the spontaneity that is so celebrated as a marker of true revolutions. Indeed, there is something particularly endearing about such impulsive action that involves hundreds and thousands of people. In fact, the way in which the protests across Tunisia and now Egypt seem to have taken place celebrates the potential of ordinary individuals along with the emancipatory potential of social mediums like Twitter and Facebook. With these technological developments there is the possibility of a move away from an earlier emphasis on organisational capacities to instigate and propel mass action, towards networks of communication and information. It is, what Manuel Castelles calls, flows rather than organisations that today perhaps have an important role in prompting (mass) action. ‘The depth and direction of these flows’ – to reframe a point made by Timothy Luke – ‘constitutes a new dimension of thought and action. Partly local, partly global [think of how the protests in Tunisia inspired protesters in Egypt], such glocal [global/local] flows…[make up] a telesphere/cybersphere of artificial spaces…[animated] by streams of data, audio and video.’ This ‘artificial space’ does not imply the fictive nature of the data necessarily; the pictures of protesters in Tunisia that inspired the imagination of so many across the Arab world and beyond, were most certainly ‘real’. But streamed through YouTube, Twitter and Facebook to various recipients across the world, these mediums helped imagine, create and then support a space from which subsequent action was able to be instigated. In this respect, the celebration of these mediums and of ordinary individuals who engaged with such spaces as were opened up by these mediums is most certainly warranted and I too am awe struck by how amorphous and momentous all of this has been. Yet I cannot but return to the binary that is constitutive of change when spoken of in the context of revolution.
Action can be infectious. To march on the street and to call for the overthrow of a government is revolutionary by definition but it is wrong to imagine action as an end in itself. All ends need to be purposeful and all purposes need careful deliberation in order for the actions that lead to them to be both meaningful and truly efficacious. What should Egypt and Tunisia look like once the winds of change blow through them? Who is to take over? How is this process to be managed? The Iranian Revolution is an example in point (in spite of the fact that it was not without its shortcomings). From exile Ayatollah Khomeni wrote and propagated much that shaped the emotions and thoughts of many within Iran. Khomeni also had supporters both in and outside Iran who were at hand when the revolution began and also there when it drew to a close.
In the fervour of revolution, therefore, one ought not to overlook the need for stability. Action needs direction or else like water in a boiling pot, it bubbles over and eventually dies out. Lets hope that all of us who support the people and the need for extensive and meaningful reform do not look back and wonder how and when the chance for progress was lost.
Notes:
Sources: www.islam21c.com

Islam21c requests all the readers of this article, and others, to share it on your facebook, twitter, and other platforms to further spread our efforts.
Syed Haider