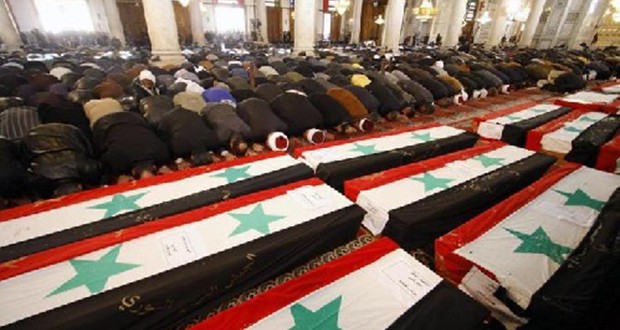 More than one hundred Islamic scholars representing various Islamic trends have issued a statement denouncing the Syrian regime and forbidding continued service in the Syrian army and security forces. They have also called on all Arab and Muslim states to withdraw their ambassadors from Syria and put pressure on the states which are continuing to support President Bashar al-Assad’s regime, especially Russia and China.

107 of the most well-known Muslim scholars from various countries, representing various Islamic groups and organizations have signed the statement which was issued on Tuesday 7th February 2012 / 15th Rabi’ al-Awwal 1434. They include Dr. Yusuf al-Qaradawi, the President of the International Union of Muslim Scholars, Dr. Ali Gomaa, the Grand Mufti of Egypt, and Shaikh Rached Al-Ghannouchi of Tunisia.
Shaikh Dr. Haitham al-Haddad also joins these scholars in signing this declaration as well as calling on the scholars of the United Kingdom to join the signatories. (Those interested in signing the declaration should contact MRDF via e-mail and we will add their names.)
The scholars call on Muslims and free people all over the world to support the Free Syrian Army and at the same time call on the Free Syrian Army to be disciplined in order not to stray from its mission to protect the Syrian people – they should steer clear of harming innocent people and carrying out revenge attacks.
The scholars also announced their support for any sincere effort to curtail the bloodshed in Syria and to protect the Syrian people from a prolonged civil war which could destroy the country. Such support, they said, is a fundamental Islamic requirement.  They said that they supported the holding of free elections which would express the will of the people.

TEXT OF THE STATEMENT

All praise be to God Almighty, the praise that is due to Him in all situations.  Peace and blessings be upon Prophet Muhammad and his household.

What is happening in our beloved Syria – oppression, persecution, and the spilling of the blood of innocent people by a tyrannical regime and its allies is a crime that will never be forgotten. God is certain to make the shedding of the blood of innocent people a disgrace for those who participate in the regime’s crimes or remain silent, as well as for individuals, organizations and states that support it.

With every day that passes, scores – sometimes hundreds – of people die and many times that number are injured. Families are made homeless, women are raped and sanctities are violated. The security forces commit these crimes without shame or hesitation whilst the world meets to merely discuss the situation.

The signatories of this statement reaffirm the absolute prohibition of bloodshed in the Quran and the Sunnah, and the sanctity of all the rights which Islamic law grants and protects. In the Quran God associates shedding the blood of innocents with unbelief,

“Believers, never invoke any deity side by side with God, and do not take any human being’s life – [the life] which God has willed to be sacred – except for a just cause, and do not commit adultery.[1]

God promises murderers eternal hellfire, damnation, and a painful torment, and He decreed that whoever kills a person will have been considered as having killed all of mankind. Whoever saves the life of a person will be considered to have saved all of humanity. He commanded support for the weak and the oppressed. In light of this we affirm the following:

1. It is forbidden for members of the Syrian army, the security forces or other groups to kill citizens or discharge weapons in their direction. They must disobey orders to do so, even if that means being killed.  Indeed, they should desert their positions.  Those who have already killed people should remember that killing twice doubles the crime and that on the other hand, the gates of divine forgiveness are open. In the story of the man who killed ninety-nine people there is a lesson to all. They should not make light of murder, but neither should they think that murders they have previously committed seal the gates of repentance and forgiveness. It is better for them to be murdered than to be a murderer. It is infinitely better for anyone to meet God as a martyr than a murdering criminal.

We hereby rule that it is not permissible to remain in service in the Syrian army and the security forces in the current circumstances.  It is a duty to desert the forces and to stand against them.

2. We call for the support and the strengthening of the Free Syrian Army. Members of the regular army
and security forces should join it in order to protect civilians, cities, and public institutions. We also call on Muslims and on the free world to support and assist this army in any way possible, materially and morally, in order for it to carry out its mission and to organise its ranks.

3. It is a duty to support the revolutionaries in Syria in all their material and psychological requirements, so that they can successfully complete their revolution and attain their rights and their freedom.

4. We call on Arab and Islamic states to take a firm stand with those states which support the Syrian regime, in particular Russia and China, and we call on Muslim peoples and their institutions to send messages of protest to the representatives of these two states and to demonstrate in front of their embassies all over the world. They should be told that they must not turn the blood of innocent people in Syria into a tool to strengthen their economic and military presence in the world. These states must realise that the future in the region belongs to the people. Whoever places his hopes on repressive tyrannical regimes prepared to kill their own people will certainly be disappointed. Their end is near. The people will not forget the shameful stances of those who stood against them and supported their oppressors.

5. We call on the revolutionaries in Syria and the Syrian National Council to stand united and to set aside any differences they may have amongst themselves, currently, or in the future.  They should harbour sincere intention to build their future state on the basis of justice and the preservation of rights and freedoms. They should create civil institutions to preserve national unity and foster reconciliation steering clear of individual, class, or regional interests.

They also need to protect the ethnic and religious minorities which have lived for more than a thousand years as part of the Syrian people, and who have along with the majority, all the rights of citizenship. Only the regime and its institutions have responsibility for the horrific crimes which have been committed (and not the minorities they may belong to).

6. We announce that popular committees to support the Syrian revolution are being formed all over the world especially in Jordan, Lebanon, and Turkey. Such committees will also help Syrian refugees and those who have been forced out of their homes who need food, clothing, and medicine.

We pray that God grant the Syrian people immediate relief, preserve their unity, and return to them a state of security and stability under a just government which is committed to the preservation of people’s rights and freedom.

Islam21c requests all the readers of this article, and others, to share it on your facebook, twitter, and other platforms to further spread our efforts.[1] Al-Quran 25: 68