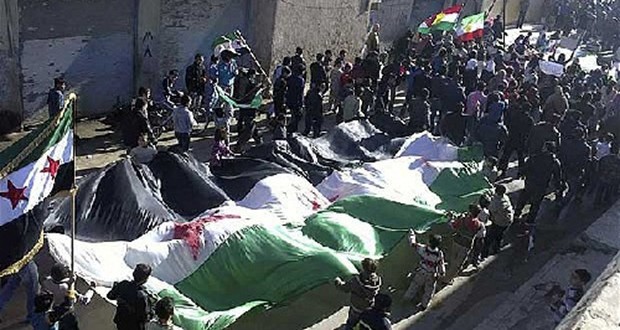 All praise is due to Allah, the One who hears both that which is said aloud and in secret, providing relief from calamity and misfortune. May peace and blessings be upon the special elect, the Prophet Muhammad, his family and all of his Companions.

The catastrophic situation the Syrian Muslims are currently facing compel us to (as well as making it an obligation on all Muslims) to support them in any way we can. It should be noted that the Syrian regime is the most brutal and barbaric force in the Middle East. Bashar al-Asad, the current president of Syria is the son of the previous president, Hafiz al-Asad, who killed more than 20,000 Syrians from the city of Hamah in 1982 as well as imprisoning over 50,000 people who remain missing. This wicked family has altered Syria from a source of goodness and delight into a land of fear, sorrow, poverty and misery. They have tried by various means to wipe out both the religious and humanistic nature of a people who have been known throughout history as being scholarly, kind, and generous and courageous. It is very true to say that this regime has acted like a petty gang that has enslaved its people, subjugated them and used them for their own ends.

We must note that the Syrian revolt against its dictators has shown an incredible level of courage and audacity. In a bid for their freedom more than 100 people are slaughtered everyday with the rest living under the siege by the heavily equipped army that is supposed to protect them. Children, women, eland the elderly are being killed and tortured mercilessly. I previously stated that the way many Western Muslims have responded to atrocities taking place in Syria is heart breaking and fails to reflect a real sense of brotherhood and what it entails. The Prophet said, “The Muslim is the brother of another Muslim; he does not betray him, lie to him or forsake him.”[1]

Had a small version of this massacre been carried out by a western country, we would have seen Muslims marching and speaking out all over the country. Many of us do not realise that the Syrian regime is far worse than western countries in every way, ideologically as well as humanely. We tacitly take part in this massacre by remaining silent and thus put every possible effort into helping the oppressed in Syria.

We say to our brothers and sisters in Syria that all of you are obliged to take part in this historic battle and the revolution should continue and intensify as the end is very near, by the will of Allah.You should not repeat the same mistake some of your forefathers committed by preferring to live in humiliation and keeping quiet rather than standing up for a dignified life. Look at the high price you have had to pay for it. Allah will be with you if you are trulybelievers.

“Truly, Allah defends those who believe. Verily! Allah likes not any treacherous ingrate to Allah.”[2]

You need to be more united and start working on drawing up a road map for yourselves in order to set clear objectives for your journey. Muslims are obliged to help their brothers and sisters in Syria. The Prophet (peace be upon him) said, “aid your brother whether he is an oppressor or the oppressed.”[3]

Supplication is the least we can offer to the oppressed:

Amongst the most important and effective ways of supporting the Syrian people is to make du’aa to Allah to alleviate their hardship, grant them victory and help them to be free of the dictator sooner rather than later.

One of the important forms of supplication is the Qunoot, of whose rules and mannerisms the following is a brief explanation.

1. What is meant here by Qunoot is to supplicate collectively to Allah, Mighty and Magnificent, in obligatory congregational prayers to relieve a calamity that has afflicted a group of Muslims,

“Oh Allah, save Al-Walid ibn Al-Walid, Salamah ibn Hashim, Iyash ibn Abi Rab’iah, and the oppressed believers. Oh Allah, put hardship and pressure on the tribe of Mudar and give them years of famine like those during the time of Yusuf.”

He would say this aloud. In some of his (may Allah’s peace be upon him) prayers such as the fajr prayer, he would say: “Oh Allah, curse so and so”, cursing some tribes of Arabs until Allah revealed:

“Not for you is the decision whether He turns in mercy to (pardon) them or punish them; they are the evildoers.”

3. Qunoot takes place after ruku in the last rak’ah of all the obligatory prayers, whether the prayer is silent or loud prayer when performed in congregation (jama’ah). There is no harm if it is confined only to the loud prayers since there is no specific evidence concerning this, and as such the matter is flexible.

4. Qunoot can commence with supplicating against the oppressors without commencing with al-hamd since it seems to be closer with Prophetic practice. Were one to commence with praising Allah, there is no harm due to the generality of his (may Allah’s peace be upon him) saying, “If anyone makes du’aa, let him start with praising Allah, then invoking salah on the Prophet, then supplicating for what he wishes.” The same applies to invoking salah upon the Prophet (may Allah’s peace be upon him) – the matter is flexible.

5. We should not start this Qunoot by using the Qunoot of the witr prayer which starts with “Allahumma ihdina fi man hadayt…” because this, assuming that it is authentically reported as the Qunoot of witr prayer, is mentioned in a specific context and not as a general method. The Qunoot for calamity is for a completely different situation and different mannerisms are reported for it.

6. It is recommended to limit the du’aa to the calamity and not prolong it by mentioning other things -this in compliance with the practice of the Prophet (may Allah’s peace be upon him).

7. Du’aa should be pronounced loudly by the Imam, and those who follow him should respond by saying “aameen” after statements that contain request.

8. When the Imam praises or glorifies Allah, Mighty and Magnificent, those who follow him should keep quiet, not saying aamin, Ya Allah, Subhanaka, or anything similar. This has been explicitly stated by more than one of the tabi’in and early jurists.

9. If the specific calamity passes, the Imam should stop performing Qunoot in the prayers.

10. You must follow the Imam whom you pray behind when he makes Qunoot, even if you don’t agree with this opinion. This is because following the Imam in that which does not invalidate the prayer is obligatory. Qunoot in the view of those who do not allow it do not believe that it invalidates the prayer; the difference is whether it is a Sunnah or not.

11. We advise the Muslims to refrain from extremities in the Qunoot by beautifying it with poetic words. We should try to employ the supplications of the Messenger (may Allah’s peace be upon him) which were concise and comprehensive.

12. We must make supplication sincerely and reflect on its meaning in our heart. This is the means for it to be answered by Allah. The Prophet (may Allah’s peace be upon him) said: “Know that Allah will not answer a supplication arising from a negligent and heedless heart.”

I urge Imams in the UK and other European Countries to practice this important way of supporting Muslims in Syria until they overcome this calamity. We call only upon Allah by way of His Beautiful Names and Lofty Attributes to remove the Muslims from calamity. He is the one able to do so, the All-Capable.

:Source
Islam21c requests all the readers of this article, and others, to share it on your facebook, twitter, and other platforms to further spread our efforts
[1] Sahih Muslim
[2] Al-Quran 22:38
[3] Al-Bukhari and Muslim
2012-02-17
Shaikh (Dr) Haitham Al-Haddad
Previous: Islamic Education Pt 4
Next: Time to Recognize the Blair Government’s Criminality