The Plight of Rohingya Muslims 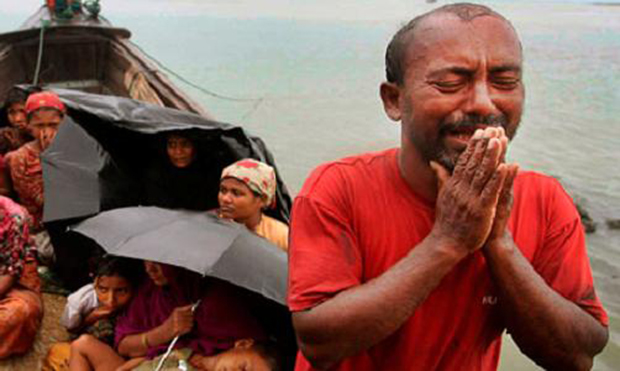 *Click here to donate to the Emergency Burma Appeal

The sufferings of the Rohingya Muslims in Arakan (Rakhine) or those who have fled to neighboring countries, have not yet ended. The burnings and looting of their houses in the villages in a number towns in Arakan are still ongoing. Murders are not exception, which has claimed thousands of lives, not to mention the cases of rapes against the Rohingya Muslimahs, in addition to those who are forced to flee to neighboring countries, who are not well received, in fact they are even driven out, all these are increasingly hurting the Muslims all over the world.

Despite being at their worst, the international world seems powerless to deal with this. The Rohingya Muslims are truly not protected, be it from the parties within the country or abroad. Whereas, Rakhine is not an unaccessible area that is far from human life. Even the Burmese authorities are silent and letting the atrocities against Muslims continue to happen, claiming to have sent their security forces to Arakan , but the security forces are not protecting the Rohingya people, in fact they are even involved in violence themselves.

Some of the pictures here have been published in the pro-Rohingya media and some were published by those who have the direct connections to the sources in Arakan, and some were taken from the video in Youtube. These are just some small evidences of the violences that are taking place in Arakan. While the precise details concerning the number of casualties, the wounded and refugees of the Rohingya Muslims have not been recorded, due to the huge numbers and the limitations of information gathering.

The silence of most of the top media of the international scale on the atrocities committed against the Rohingya Muslims, is also caused by the the ignorance the outside world on the condition of Rohingya. Some of the international media that have successfully plunged into the scene, are only recording the situation at a glance, and not showing or reporting how the Muslims are massacred and their houses burned, and they are simply showing the presence of Burmese security forces who are as if seen on guard, however it was not exposed of how the security forces are jointly involved with the Buddhist Rakhine ethnics in burning the houses, arresting and murdering the Muslims. Also it was not exposed of how the thousands of lives of the Msulims have been lost as a result of the abominations committed against them and tens of thousands of them are forced to be displaced.

Direct local sources from Arakan who can still communicate with the outside world, report the actual situations that happen through their relatives, friends or the pro-Rohingya media, despite the limitations in ability to collect detailed information. What can be reported, are only a small portion, which simply represents that atrocities against Muslims are truly happening in Myanmar.

The Muslims who are being persecuted presently in Arakan, are really in a very saddening state, helpless, only hoping for the help from Allah, with the hope that Allah would send them people who would help them, especially people from the Muslim community of the world who have the ability.

Is it really so difficult for those who have the ability to help the Rohingya Muslims? Do we need to await for the result or investigation by Burma or the UN? The Rohingya Muslims are not illegal immigrants in Arakan, they should receive the protection from the international bodies that claim to uphold the ‘Law and Basic Human Rights!’ that they always carry around. For prictures of the massacres taking place click here (images are graphic and disturbing)

“And they resented them not except because they believed in Allah , the Exalted in Might, the Praiseworthy, To whom belongs the dominion of the heavens and the earth. And Allah , over all things, is Witness. Indeed, those who have tortured the believing men and believing women and then have not repented will have the punishment of Hell, and they will have the punishment of the Burning Fire.” [1]

“Permission [to fight] has been given to those who are being fought, because they were wronged. And indeed, Allah is competent to give them victory. [They are] those who have been evicted from their homes without right .” [2]

The believers, in their love, mutual kindness, and close ties, are like one body; when any part complains, the whole body responds to it with wakefulness and fever.” [3]

*Click here to donate to the Emergency Burma Appeal

:Notes this article has been cross posted from http://theunjustmedia.com
Sources:www.islam21c.com
Islam21c requests all the readers of this article, and others, to share it on your facebook, twitter, and other platforms to further spread our efforts.