The Hypocrisy of the West’s Treatment of Morsi 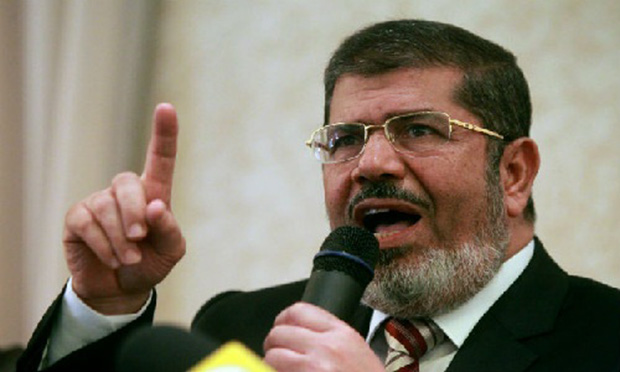 By the grace of Allah, things have really turned around in Egypt, and what was once a land of oppression and corruption is changing considerably for the better. The people seem to be happier and where there was once fear (usually of the secret security services) there is now much hope.

Given the installation of democracy, one would assume that the west would be quite happy, if not only for the fact that Egypt has maintained its agreements with Israel.

However, it seems the Islamists continue to ruin things for western powers, especially as it is becoming clearly apparent that the Islamists have been behind most (if not all) the uprisings. Tunisia saw the return of Shaikh Rachid Ghannouchi and the Islamist an-Nahda party, in Egypt we had the Brotherhood’s own Morsi, in Libya Islamist factions control the government and streets, and even in Syria the salafists were the first to initiate and join the anti-Asad movement (as attested to by the sufi shaikh Muhammad Ya’qubi). In fact, as much as the west would like to disparage Islamists and Islamism, it has been the democratic choice of the Middle Eastern people to return to Islam after the dark and suffocating grip of secular tyrannical rule. In fact, recent events stand as testament against foolish debaters such as Richard Dawkins who blames religion for the world’s woes; in the Middle East it has been secularism and the refusal to accept God that has oppressed the minds and bodies of citizens.

The west, with all of its (hypocritical) speech about democracy now stands to vilify the Egyptian government at every turn. We find the western media perpetually disparaging every choice made by Morsi, whether it’s his appointments for positions in government or whom he decides to visit.

We are constantly told that that Morsi is manoeuvring around impediments to build an Islamist constitution and an Islamist group of ministers when he should be appointing Christians, women, and secularists. But what such silly reporting forgets to remind us is that the parliamentary elections yielded an eighty percent Islamist majority made up of the various Egyptian Islamist factions. Thus, to report Morsi as being conniving or treacherous is absolutely insincere – eighty percent of the country wants Islamists running the country, writing the constitution, and acting as ministers. In fact, there is no democratic state in the west that could even closely boast such margins for the winning ideology and where a party does win (such as Labour with only 16% of the country voting for Blair), are they under any obligation to make sure they include representatives of the Conservatives and Liberal Democrats? So why should such an absurd thing be asked of Morsi? It is things such as this that point to the clear inconsistencies of the western narrative: implement democracy in a way that appeases us!

The godless west has chosen to relegate Allah and prop-up their desires, and when the righteous act and goodness is seen to be in the hand of the believers, instead of speaking without bias and offering credit where it is due, they misrepresent the facts and criticize those who have acted, in fact, in accordance with the west’s initial requests. It’s not only because they don’t like Islamism, but that they strongly desire that Muslim governance fail. It is as Allah says,

“They intend to put out the Light of Allah with their mouths. But Allah will complete His Light even though the disbelievers hate (it). He it is Who has sent His Messenger with guidance and the religion of truth (Islamic Monotheism) to make it victorious over all (other) religions even though the polytheists hate (it).”

The question now it seems is whether Morsi will stand for his principles or give in to US pressure –John B. Quigley, a professor of law at Ohio State University wrote recently:

“The United States has to accept a realignment in the Middle East. Morsi, as a president coming out of the Muslim Brotherhood, is not always going to act consistent with U.S. policy like his predecessor…The fact that Morsi may not be in sync with the United States may, in the longer term, not be so bad. We have been singularly unsuccessful in resolving the Israel-Palestine situation…We extended aid to Egypt as a counterweight to the aid we give to Israel. The aid we give to both countries is politically motivated, rather than needs-based. Aid to Egypt should be viewed from that perspective. If Egypt aid is to be cut, aid to Israel should be on the chopping block as well.”

One thing that comes out of this is that the enemies of Islam will scheme at every turn to undermine a Muslim government to spuriously demonstrate that religion and governance do not work in tandem. It is thus our job to aid our Egyptian brothers in any way we can to expose such enemies to be conniving frauds.

“And when those who disbelieve (in the Oneness of Allah) see you, they take you not except for mockery (saying): “Is this the one who talks (badly) about your gods?” While they disbelieve at the mention of the Most Beneficent (Allah). Man is created of haste, I will show you My Ayat. So ask Me not to hasten (them). And they say: “When will this promise (come to pass), if you are truthful?” If only those who disbelieved knew (the time) when they will not be able to ward off the Fire from their faces, nor from their backs; and they will not be helped. Nay, it (the Fire or the Day of Resurrection) will come upon them all of a sudden and will perplex them, and they will have no power to avert it, nor will they get respite. Indeed (many) Messengers were mocked before you, but the scoffers were surrounded by that, whereat they used to mock.”

Notes:
Sources:www.islam21c.com
Islam21c requests all the readers of this article, and others, to share it on your facebook, twitter, and other platforms to further spread our efforts.
Ismail Adam Patel