The Israeli War on the Free Press 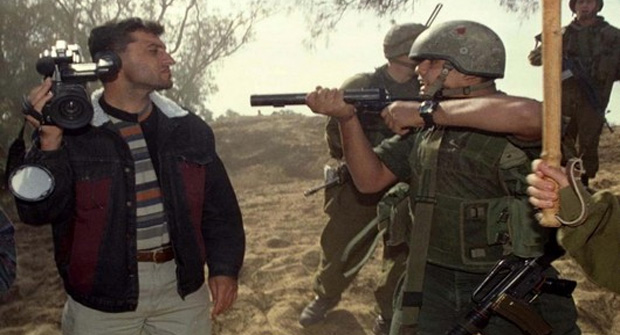 With the ever unfolding events in Gaza; and in the wake of the history of the past ten years or so, why anyone would find it shocking that Israel is targeting civilians and journalists in its violent incursions on the Palestinians is beyond me. During the last ‘War on Gaza’ a UN observation post was taken out by the Israeli ‘Blitz Krieg’ of Gaza and subsequently its extension into Lebanon killing UN observers— perhaps to intimidate and silence any possible contradiction to their version of events despite their official statement of regret.1

One of the hallmarks of a civilized nation is supposed to be a free-press. In an unsurprising revelation which should astonish no one the press Freedom index dropped Israel from 20th position to 112thposition. The drop was due to Israeli atrocities in Gaza wherein it has been alleged that journalists were targeted. Often glossed over by the world media, there are numerous examples of Israel muzzling the global press should it allege something unfavorable about their activities even when it is common knowledge on the world stage.

Both the press and any US public figures are understandably wary of making any critical remarks towards Israel’s conduct against the Palestinians because usually to do so is the final nail in the coffin of any public career. A pretty good example is the case of Helen Thomas, a long time and well respected veteran journalist with the Washington Press Corp who said ‘Zionists own the White House, Hollywood and Wall Street’. Thomas, when confronted with the fact that the Jews are only a small percentage of the US total population, she said “I know where you’re leading with this. You know damn well the power [Jews] have…It’s real power when you own the White House, when you own these other places in terms of your political persuasion. Of course they have power.”

This is my home,’ knock on the door at three in the morning and have the Israeli military take them out. That’s what happens. And that’s what happened to the Jews [during the Holocaust]. Why do [the Israelis] inflict that same pain on people who did nothing to them?”2

“The Jews should get the hell out of Palestine,” she also said.

Mark Levine writes in his Al Jazeera article regarding the media’s reaction to Thomas’ consequential pressured resignation over her defiant words against the Palestinian occupation:

“Thomas’ words were an unexpected but certainly welcome gift to the Israeli government and its supporters, at least for the moment. Now instead of talking about the 30 plus shots fired into the bodies of activists on the high seas, the media has to bend over backwards to demonstrate its commitment to Israel’s narrative. Instead of demanding better access to Gaza, it has to refute the liberal anti-Israel bias of the media.” 3

Though Helen Thomas’ statements about Israel were universally condemned by the press and others, there were few dissenting voices amidst the catcalls in her profile lynching.

“Ralph Nader noted the “double standard” where one off-hand “ill-conceived remark” ended Helen Thomas’ career while “ultra-right wing radio and cable ranters” engaged in “bigotry, stereotypes and falsehoods directed wholesale against Muslims, including a blatant anti-Semitism against Arabs.” Gary Leupp in CounterPunch called the interview an “ambush” because it was a spontaneous one and wrote the “they” referred to did not specify whether it was all Jews or Jews in the Israeli-occupied West Bank. He also criticized the White House for being more outraged by Thomas’ comments than by Israel’s May 31, 2010 Gaza flotilla raid which killed nine aid workers. Paul Jay on Huffington Post wrote Thomas “clearly” was referring to Jews from Germany, Poland and America who had to go to Israel after World War II, mostly because “the American, Canadian and British governments would not drop their anti-Jewish quotas” and that most refugees would have preferred to go to those nations. “ 4

Another example of the Israeli power over the press is the circumstances surrounding the termination of Khalid Sunni, a former Baltimore Sun reporter placed on probation for questioning Israel’s influence on American politics on his Facebook page, was finally fired for writing:

“I, for one, have had enough of this pandering before the Israeli regime,” he wrote. “The war-mongering toward Iran has, once again, distracted the world from Israel’s brutal military occupation of the West Bank, East Jerusalem and the Golan Heights.” 5

Around this time there were others from less impeachable and notable voices felt compelled to make themselves heard. For example, British Prime Minister David Cameron and the former US President, Jimmy Carter both whom characterized Gaza as a “prison camp” in 2010 when critiquing the Israeli occupation of Gaza. As usual the comments were briefly noted and then quickly forgotten. 6

The Israelis wield so much political clout and influence that criticizing them, even among the Muslims in Jerusalem, brought about the dismissal of an Islamic judge’s career when he was fired for merely pronouncing his opinion that “Israel did not want peace,” in a newspaper interview. 7

Oddly enough, he was fired by the Palestinian Authority, a western approved group formed when Israel and the US didn’t like what the Palestinians did with their vote in the last election after the untimely demise of Yasser Arafat.

It seems the majority of the world press has become the pawn and tool of the corrupt. Perhaps Gile Scott Heron’s rap poem about the co-opted media was indeed right when he said “the revolution (the true change for good) will not be televised.”

I am sure there are many more journalists taking a position, but the press is only as strong as its ability to be heard. However in the case of the world today, it largely only says what Israel allows it to say.