An Alternative Muslim Guide to the General Elections 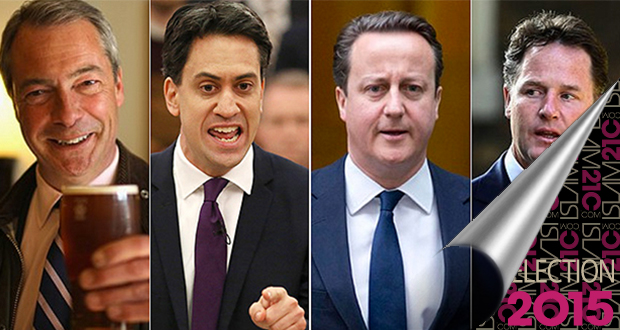 While the UK is in the grip of election fever, Britain’s Muslims are facing up to the dizzying quandary of which electoral outcome, if any, can truly benefit the legions of Muslims in the UK.

Muslims in Britain constitute 4.8% of the population, making us the second largest faith group in the UK after Christians.[1] We tend to come from lower-income households and experience higher levels of unemployment. 48% of Muslims are aged 24 and under and half of British Muslims live in the 10% most deprived areas of the UK.[2]  These factors usually edge voters to the left. Thus Britain’s Muslims have traditionally voted overwhelmingly in favour of Labour, with the party boasting 84% of Bangladeshi and 80% of the Pakistani vote in 1997.[3]

Tony Blair’s disastrous warmongering escapades into Iraq and Afghanistan have since diffused British Muslim loyalties across the political spectrum. It turns out that murdering a million Iraqi citizens in order to maximise Persian Gulf oil flows and facilitate the Anglo-American manipulation of global energy levels is a bit of a turn-off to British Muslims. Who would have thought?

According to official Government guidelines we must subscribe to “fundamental British values like democracy” or run the risk of being condemned as extremists.[4] This, despite the fact that democracy is only about as British as taramosalata: the birthplace of democracy being Athens, not Whitehall.

So quick, where should we put our crosses on the ballot paper?

Both the Tories and Labour have converged at the centre of British politics in recent years, abandoning the British Muslim voting base. The Liberal Democrats were the chief benefactors of this in the last general election, garnering a significant proportion of the Muslim vote.[5] But just like the time I thought it would be a good idea to trim my finger nail with a pencil sharpener, voting Libdem proved to be a very painful mistake. Having Maajid Nawaz on your books never helps either. He remains about as palatable to the British Muslim community as a soggy ham sandwich.

Anyway, due to the high concentration of British Muslims in certain areas, there are around 32 marginal constituencies where the Muslim vote will hold great sway.[6] But can any political party hope to galvanise the British Muslim vote in 2015?

British Muslims are a largely undecided demographic. This makes interesting comparison to a recent poll suggesting that British Jews will be voting overwhelmingly in favour of the Conservatives, citing attitudes toward Israel as “very important” in influencing their vote.[7] With 53% of British Muslims born outside of the UK, foreign policy is the leading concern among British Muslims too.[8] Palestinian statehood representing the most attractive foreign policy for British Muslim voters, with the Muslim Engagement and Development group (MEND) including it in its impressive Muslim Manifesto.[9]

Above and beyond British foreign policy, the Muslim Vote is not a particularly difficult one to appeal to. Granted Muslims in Britain are not a single homogenous group but there are general domestic policy areas that are likely to draw our collective political interest. Muslims tend to have an appreciation for family values, wealth redistribution and social justice (as well as an itching curiosity to see how well a blindfolded Nigel Farage would fare in North Peckham Estate on a Friday night).

Ed Miliband’s condemnation of the Iraq War in his efforts to shed the party of the toxic reputation consigned by New Labour was a welcoming development. Labour’s Black, Asian and Minority Ethnic manifesto, to be unveiled by Sadiq Khan, details some interesting policies; like the plan to finally include Islamophobia as a legitimate and punishable hate crime.[10] If Labour can reinvent itself as the party of the working class once again, standing up strongly for the welfare state, it may begin to think about winning back the Muslim vote.

For now though, the legacy of Blair’s bellicose foreign policy still looms largely over British politics. The blowback effects of the War on Terror and the ensuing chaos caused by ISIS are direct results of New Labour’s disastrous foreign policies. Ed Miliband must condemn the actions of his predecessors and neutralise the current government’s assault on civil liberties if he is serious about winning the Muslim vote.

Katie Hopkins’ promise to leave the country if Ed Milliband becomes PM likely caused a surge in Google searches for “countries furthest from UK” and “least populated countries”.[11] I believe Alofi, Niue is not too bad at this time of the year, Katie.

The Tory Government have not done too badly during their time at Number 10, except for a few misgivings. Like Teresa May wanting to nick your passport just because your Nan visited Damascus once upon a time; and Michael Gove debating with himself whether your local Imām’s toddler biting his pacifier constitutes “violent” or “non-violent” “extremism”; and the Prime Minister alienating the entire Muslim community by constantly juxtaposing us with his vague integration narratives based on “British values”; and the brutal gnawing away at the welfare state, like Eric Pickles working through a box of doughnuts; and Conservative councillor Chris Joannides comparing Muslim women who wear the face veil to bin bags.[12] Apart from all that though, the Tories seem to be working hard to better the 16% of ethnic minority votes they got in 2010 which,compared to 68% for Labour, is pretty pathetic.[13]

The small chance the Tories stood to win the Muslim Vote was lost when Baroness Warsi resigned having described the government’s policy on Gaza as “morally indefensible”.[14] The Conservatives have now impatiently turned their attention to the Hindu community, finding it “easier to penetrate electorally”.[15]

Yes, the British Muslim community need to find a better way of expressing their grievances than either burning poppies or wearing nice little poppy-printed hijabs, but who should we vote for? If, indeed, at all?

In a political climate where religious conservatism is being viewed as a conveyor belt toward violent extremism, it is becoming increasingly difficult for Muslims to practise their religion seriously and express meaningful legitimate political dissent without becoming the subject of considerable suspicion. Our government seems to liken any criticism of its foreign policy or its security services to outright treason. A host of draconian anti-terror measures have disproportionately targeted Britain’s Muslims, leaving us struggling to find a way to vent our social marginalisation. In its Autumn 2013 poll, the Eurobarometer found that just 24% of people “tended to trust” the UK government.[16]

Thanks largely to Russel Brand, the decision to abstain from voting altogether is no longer seen as a symptom of ignorance and laziness.[17] It may be seen instead as a stern expression of dissatisfaction with the modern political paradigm. It is no longer inconceivable that people may conscientiously decide not to take part in the democratic process. The UK’s proportion of young people voting in an election at 38% was way lower than the EU average of 56%.[18] Indeed, there has been a significant drop in the number of people who believe voting is the only way to have their say.[19]

Will our voice be heard loudest through its absence? Either way, we are always willing to listen.