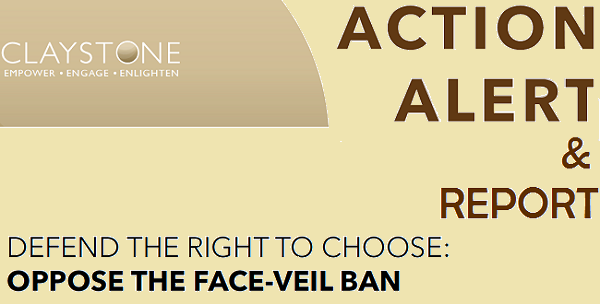 [highlight]Note; Islam21c and others are joining Claystone in their campaign against the proposed Face-Veil Ban in the UK. Join them too, read more about Claystone here[/highlight]

The Proposed Law to ban the face Veil in England and Wales will be debated in parliament this Friday 28th February 2014. The MP who sponsored the bill is Phillip Hollobone, a backbench Tory MP who has gone out of his way to re-order proceedings so that this bill stands a strong chance of being read on the day. After the first reading of the bill in September 2013, there was the most sustained period of negative media coverage against the face veil the UK has ever seen.

WHAT CAN YOU DO?

1. EMAIL/CONTACT YOUR MP BEFORE WEDNESDAY 26TH FEB:
Write a personalised letter asking them to attend the debate and represent your views. Details of MP’s and an online form can be submitted here: https://www.writetothem.com/

• How Liberal Britain in 2014 shouldn’t even be having such a discussion.
• How the ban would affect you or someone you know and their right to religious practice.
• Your concern that Britain is becoming intolerant towards Muslims and this bill is stirring up Islamophobia, undermining social cohesion and will create community tension.
• A ban would be a complete infringement on the rights to religious freedom and expression, and also constitutes a clear violation of a woman’s right to choose.
• A ban would restrict women who have chosen to wear the face-veil from living and working freely.
• Urge your MP to attend the debate and represent your views. Add that this will be something you hope to follow up and their stance will influence your vote at the next election.

3. CONTACT YOUR LOCAL MOSQUE and Muslim organisations you know, if you are at University then get in touch with your Islamic Society and Students Union. Ask them to lobby their local MP’s and MEP’s to raise awareness that such a ban is unacceptable.

4. CONTACT CIVIL SOCIETY organisations such as Liberty, as the Bill is an illiberal, discriminatory and disproportionate piece of legislation.

5. RAISE AWARENESS via social media and forward this to all your contacts. #Right2Veil

Notes: Thank you to Claystone for producing this Action Alert & Report.

Editor
Share. Facebook Twitter LinkedIn Email Telegram WhatsApp
Previous Article[al-Taḥawiyyah Pt 30] The Qur’ān is The Uncreated Unparalleled Words of Allāh part 2/3
Next Article Interview with the Imām of the Grand Mosque in the Central African Republic