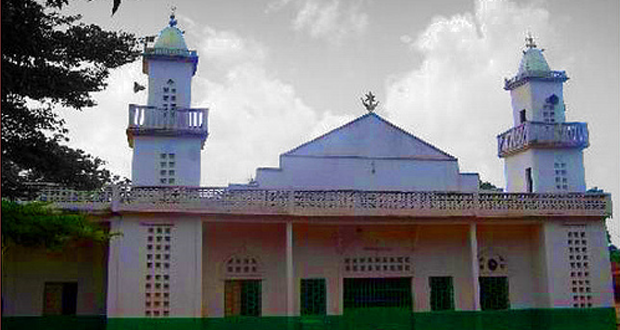 The most notable Remarks that the Sheikh made during the Interview:

Sheikh Ibrāhīm ‘Uthmān Mohammad is a member of the Supreme Council for Islamic Affairs and the Imām of the Grand Mosque in CAR’s capital, Bangui. In an interview, the Sheikh explained that the Muslims in his country generally enjoy good living conditions and are free to practice their religion. The state does not impose any restrictions on their institutions and their relationship is good with other communities, including both Catholic and Protestant Christians.

In another interview, the Sheikh Ibrāhīm pointed out that Muslims have succeeded in integrating with society and contributing to the economy despite the majority of them living in difficult financial conditions, like the majority of the citizens in CAR. This is despite the spread of poverty, deprivation, ignorance and fanatical adherence to old ways.

Sheikh Ibrāhīm furthermore mentioned the noticeable lack of Muslim political presence and attributed this to a number of reasons. Of which is the negative role that the colonial era played in marginalising the Muslims in favour of the Christians and the lack of qualified individuals who are capable of participating politically. Muslims have still managed to secure ministerial positions and many of them are in parliament, through which he hopes the situation of Muslims may improve in the near future.

The lack of Du’āt and Khatībs in a number of Mosques remains the main obstacle that stands in front of the Da’wah in CAR. The identity of the Muslims is also under threat due to the growing influence of the Baha’is and the Freemasons. This is in addition to their attempt to penetrate the Muslim community through the dissemination of destructive and subversive doctrines.

Q: Tell us how the Central African people came to Islām and can you shed light on the methods of Da’wah that have taken place?

Sheikh: As apparent in its name, CAR is located in the heart of the African continent with its North and North-Western borders bordering Chad, its Eastern border Sudan, its Southern border the Democratic Republic of Congo and its Northern side bordering Cameroon. Allāh has blessed it with much natural resource including gold and diamonds. Islām reached CAR from neighbouring Islamic Kingdoms such as the Kingdom of ‘Kātim’, in the North-East of Lake Chad, and the Kingdom ‘Bājrmī’ in the area of the Chari River. Islām was delivered to Central Africa through the efforts of these kingdoms, starting first in its Northern parts and preceding the arrival of Christianity by many centuries. Certain, specific conditions transformed the majority of its four million inhabitants to Christianity. Currently, 25% of the population is Muslim, located in the major cities of CAR including the capital Bangui, the city of Berbérati among other cities.

Q: You seem to imply that neighbouring countries were the only reason for the delivery of Islām to Central Africa.

Sheikh: Neighbouring kingdoms were not the sole means for delivering Islām to Central Africa but Sudan played an important role in this regard, particularly Kordofan and Darfur when Islām spread in its borders. Islām then took a leap forward in a short period of time and spread amongst the ‘Allamda Zande’ tribes and the Sudanese groups that lived in the east of our country.

Q: How are the living conditions of the Muslim minority in Central Africa and what are the main challenges that they face?

Sheikh: Muslims in CAR enjoy good living conditions and are free to practice their religion. The state does not impose any restrictions on their institutions and their relationship is good with other communities, including both Catholic and Protestant Christians. Muslims have succeeded in integrating with society and contributing to the economy, particularly in the sector of precious metals, which is controlled by around 7000 Lebanese individuals who employ African retail staff. A large number of Muslims, however, as with many of the citizens of Central Africa, suffer from poverty and illiteracy while holding tightly to old social or religious traditions, not willing to let them go.

Q: There are reports of certain government agencies putting restrictions on the economic influence of Muslims in the country, can you comment on this?

Sheikh: Certain laws try to suppress the involvement of Muslims in the economy by restricting the extent of their dealings. This includes requiring them to register their activities within those companies that fall under the full control of the government. Other individuals furthermore view the Muslims in CAR as a threat to the Christian majority while advocating religious intolerance. The government is nonetheless trying to address this issue in Bangui to maintain the security and stability of the country.

Q: Why has the political role of Muslims in CAR diminished despite them being a quarter of the population and participating effectively in the country’s economy?

Sheikh: Although Muslims do not face political or religious persecution, they have not adequately participated in politics nor do they represent their proportion in government. There are many reasons for this, not least the impact that colonialism had in empowering Christians at the expense of Muslims who were marginalised in addition to the lack of politically qualified Muslim individuals. Despite this, there are around five Muslim Ministers and dozens in parliament. We hope that in the near future, Muslims focus more on teaching and begin to use the political platform to improve their status on all levels.

Q: There have been repeated attempts at imposing the CEDAW (‘Convention on the Elimination of all Forms of Discrimination against Women’) Protocol on Muslim minorities in African counties. Has this occurred to the Muslims of CAR?

Sheikh: What is reassuring is that the law governing personal affairs is derived from the Sharī’ah and Muslims do not allow others to interfere with their affairs. The Supreme Judicial Council issues rulings concerning marriage, divorce, inheritance and so on, in collaboration with scholars in the Fatwa Council. I believe that Bangui’s decision to not interfere with Muslims’ personal affairs is something positive and has maintained good relationships between the government and our community.

Q: Let us move on to the field of Da’wah. What are the main issues faced by the Muslims and have Islamic institutions tried to address them?

Sheikh: No doubt there is a huge shortage in the number of Du’āt. The lack of Imāms and Khatībs in many mosques is one of the main obstacles that stand before the Da’wah, to the extent that religious knowledge is diminishing and people are becoming ignorant of their religion. Additionally, Da’wah institutions are poorly resourced and unable to reach remote areas in CAR that are often inhabited by Muslims, which is making the situation worse. Baha’is and individuals with Freemason tendencies are increasing in influence whilst trying to harness the situation in infiltrating the Muslim community through their corrupt ideologies.

Q: How have you addressed these difficulties and has the Arab and Muslim world helped you in this regard?

Sheikh: Dozens of Islamic organisations led primarily by Muslim youth as well as the Islamic Society of Central Africa have undertaken efforts to address some of the issues in our community. Some have sent envoys to study abroad in Egypt, Saudi Arabia and Libya, benefiting from cooperation between local organisations and international charities, some of which are the World Assembly of Muslim Youth, the Committee of African Muslims, Direct Aid (Kuwait), the Rashid Foundation (UAE), the International Dawah Society (Libya), some Sudanese institutions and al-Azhar sponsored by the Institute of Mohammad Noor.

Q: Has the presence of a number of institutions that focus on teaching Islām and Arabic in CAR helped to address some of the problems it faces?

There are more than five Islamic schools in CAR the most important of which ‘Salāh al-Dīn’ school, the Iraqi School, the District of Gouna School and ‘Miskīn’ school which is part of the capital’s central mosque. All of these schools teach Qur’ān, Islamic Sciences and Arabic language, providing at the same time accommodation for their students. Subject to the limitations that the schools could offer, many Du’āt have graduated with just about enough knowledge to allow them to practice Da’wah. This can also qualify them to enrol in advanced level education. In addition to this, we point out the important role of what are known in Bangui as ‘al-Jūnī al-Swīr’, an initiative that has attracted many people to memorise the Qur’ān, particularly amongst children and youth.

Q: Are the grants you receive from some Islamic universities enough to carry out adequate Da’wah activities?

Sheikh: In spite of al-Azhar offering many scholarships annually for Muslim students in CAR, there remain many shortcomings. The financial situation of the youth who travel to study is extremely tight, not least due to the fact that they are given no more than $20 a month for their expenditure by al-Azhar. This amount is insufficient for the majority of them and many end up returning to CAR or consider immigrating to Israel. This makes parents hesitant to send their children to study in the first place.

Q: Does the complexity of life experienced by the Muslims of CAR provide passage for Christian missionaries to carry out their plans?

Sheikh: Christian missionaries, Catholic, Protestant and Evangelist are everywhere and are very active. The Vatican plays a central role in supporting the missionary movement through the many schools that it owns across the country as well as the health services that it provides through its hospitals and clinics. Missionaries do not fail in linking their teachings to the services they provide, helping the Christians, once a minority, dominate the country. Additionally, there has been a very apparent rise in Baha’ism and Freemasonry who are persistent in trying to ideologically penetrate the Muslim community.

Q: How do the Muslims deal with all of this?

Sheikh: The picture seems rather bleak but in fact more that 200 missionary institutions have failed in sabotaging the Muslims of their religion. This is due to the good and persistent communication between the Muslims in CAR and those in Arab and Muslim nations, including the arrival of Egyptian and Sudanese Du’āt who succeeded in rendering the aims of the missionaries a failure.

Q: What is the reality of the relationship between Arab countries and CAR?

Sheikh: In reality, these ties are very close and there have been repeated visits carried out by Arab officials to the capital Bangui including ministers from Libya, Saudi Arabia and Qatar. These countries tend to support those development projects in the country while Turkey plays an active role in supporting our health and educational services. All of this has contributed to our welfare and is pushing our relationship with the Muslim world forward.