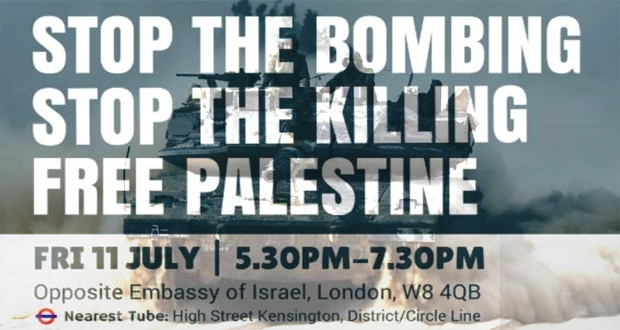 Who is the Aggressor?

Israel has said that it is stepping up its military assault on Gaza in ‘response’ to rocket fire from the Gaza Strip. This is the lead into the story in every major newspaper and news channel, providing a justification for Israel’s disproportionate violent attack on the Gaza Strip. Dozens of Palestinians have been killed from the last few days’ air strikes.

“There is a cycle of violence in which the Palestinians are the biggest victims. To call Israel’s disproportionate military strikes a ‘response’ to rocket fire from Gaza is incredibly misleading. The numbers of air strikes, sound drones and naval attacks Palestinians in the Gaza Strip have to endure on any given day or week is the reason for the rocket attacks, not the reverse,” said Ismail Patel, Chair of FOA.

Since Israel’s war on Gaza (Operation Cast Lead) ENDED on 19 January 2009, 490 Palestinians have been killed by Israeli military strikes in Gaza. 3 Israelis were killed in the same period. These statistics reflect the gravity of Israel’s ceaseless violence against Palestinians and puts some perspective on the claim that Israel’s latest round of disproportionate military strikes are in ‘response’ to rocket fire from Gaza.

FOA calls on all people of conscience to take action by:

1. Lobbying your MP, and ask him/her to contact Hugh Robertson, the Minister for Middle East, requesting a statement condemning Israel’s disproportionate use of force and relentless violence against Palestinians.

2. Contact the media and send them the details from the press release above, and request that they cover the true extent of Israeli aggression in their reporting.

3. Join the protests taking place in various cities in the UK.

This was a press release issued by FOA

2014-07-11
Friends of Al-Aqsa
Previous: Conclusive scholarly opinions on ISIS
Next: Glad tidings, O martyrs of Gaza, and woe to us