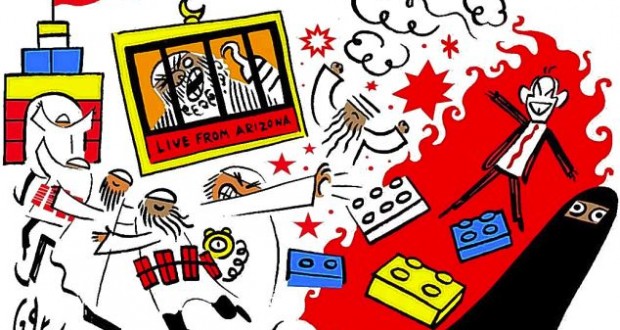 ACTION ALERT: INCITEMENT OF RELIGIOUS HATRED AND INFLAMMATORY REMARKS BY RICHARD LITTLEJOHN IN THE DAILY MAIL

The image above was publish in an article today (18th February) in the Daily Mail and has caused outrage in the Muslim community. The article is replete with inaccuracies and seeks to stereotype Muslims as, extremist, terrorists and repeats the Islamophobic stereotypes of the likes of the EDL and other bigots. It incites hatred and in an atmosphere of growing hostility to Muslims and the rise of Islamophobia, such articles serve to deliberately stoke hatred and instigate violence against minorities.

An extract of the article refers to the author’s account of what will take place with children on the day at a theme park:

What is the author known for?

A short web search will give you hundreds of examples, but here are 2:

In December 2010, Littlejohn “satirised” an incident in which a 20-year-old man with cerebral palsy was thrown out of his wheelchair by police at a protest. Littlejohn argued that the young man involved should not have attended the protest, and compared him to Andy Pipkin from Little Britain.

In December 2012 the Daily Mail published an apology following a piece written by Littlejohn which insinuated that ethnic minority staff had got their jobs through discrimination and had threatened to sue the EHRC.

We all, Muslims as well as non-Muslims, need to take stand against this vile article and demand an immediate retraction and apology from the author and the Daily Mail for making such degrading and disgusting comments.

WHAT CAN YOU DO?

1. EMAIL/CALL THE EDITOR OF THE DAILY MAIL COMPLAINING OF INSULTING AND INCITEFUL ARTICLE – DEMAND A RETRACTION OF THE ARTICLE AND A PUBLISHED APOLOGY.

2. FILE A COMPLAINT WITH THE PRESS COMPLAINTS COMMISSION STATING THE SAME. IT BREACHES CLAUSE 12, DISCRIMINATION OF THE PCC’S EDITORS CODE OF PRACTICE.

2014-02-18
+Editor
Previous: The Central African Republic: The Companions of the Ditch
Next: “FGM”: The Latest Attempt to Dehumanise Muslims