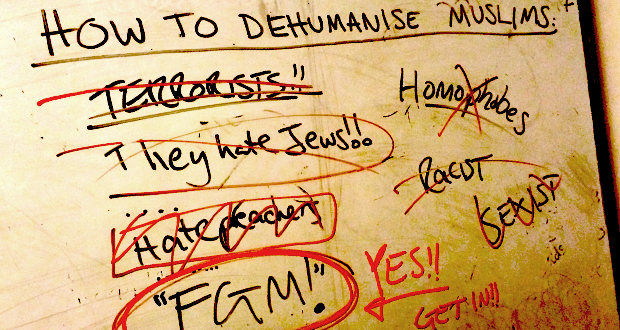 Moments after the vitriolic attack by the Daily Mail against Muslim families going to Legoland[1], it seems that the hate industry has swiftly moved on to something else to dehumanise Muslims.  In a seemingly last-ditch attempt, clutching at straws, the latest attempt to demonise Muslims has been in scapegoating local scholar, Dr Haitham al-Haddad for “supporting FGM” (female genital mutilation), by carefully redacted statements of Islam’s Prophet (sallAllahu ‘alayhi wasallam) and Juristic traditions[2][3][4].  The proximity of the two campaigns could be indicative of (i) a coordinated attack against Muslims, (ii) some opportunistic bloggers trying to make a name for themselves, or (iii) simply gullible Samaritans deluded into thinking they’re fighting villains.  Either way, normally I’d like to give the benefit of the doubt to new bloggers/journalists on the scene, apparently teetering on the edge of Islamophobia; but when they’re sharing notes with the likes of the EDL and the Daily Mail, they must be exposed.

So why is the latest attack against Dr Haitham al-Haddad an attack on Muslims?  Simply put, he’s been lied about, mentioned alongside controversial “bogeymen” to stir up hatred and to top it off, dehumanised for articulating simple, mainstream Islamic beliefs as part of his job as a scholar and a teacher.  Most of the lies against him he has clarified for himself here[5].  However, I wanted to clarify this new FGM curve-ball that came out of the blue.

Before the most recent classification by the World Health Organisation (WHO), the practices of Female Genital Cutting were divided into harmless and harmful.  The harmless version was what was known as the “ritual nick”, or “sunna circumcision” (khitān in Arabic).  This is when a small incision is made in the prepuce, the female equivalent of the male’s foreskin.  Medical experts call this as harmless as ear piercing[6], and generally attach no medical benefit or harm to it.  Ironically this is said to be much lighter than the male circumcision[7].  The harmful type of cutting—which the Prophet (sallAllahu ‘alayhi wasallam) incidentally forbade, as well as the consensus of all Islamic jurists—involves removal of parts of the genitals, and is of varying degrees, which leads to a plethora of medical problems especially since they are not normally done in hygienic environments.

In 1994, a doctor who was collecting data in Sudan suggested that this traditional classification was redundant, since no one in her experience (confined to Sudan and nearby areas) performed the ritual nick[8].  As a result of this and no doubt other factors, eventually the harmless ritual nick became a footnote and was subsumed as a harmless sub-type of a sub-type of FGM.  This, as well as arguably sloppy legislation in many countries, has led to the reality we see today, that the ritual nick, despite being harmless and less extensive than male circumcision, is also considered FGM by some.  Although there are medical experts contesting this in academic and public policy circles[9], it is not something that has ever been encouraged by Dr Haitham al-Haddad or any other western scholar I am aware of in our context, due to its non-obligatory nature Islamically combined with the problems that accompany it being classified as FGM according to most western countries.

As can be seen from the history behind it, it should become clear to any reader who is not blinded by a hatred of Islam and Muslims, that the demonisation of Dr Haitham al-Haddad (or any other Muslim for that matter) on grounds that they “advocate FGM” is nothing less than ludicrous.  This is especially so since in the full video of a fiqh lesson on the rulings pertaining to children[10], a few minutes of which was taken out of context and uploaded separately by an Islamophobe, the sheikh explicitly mentions that actual FGM is completely forbidden according to Islam.  In the whole video it is also clear that the sheikh is not speaking from his own opinions, but quoting the Prophet (sallAllahu ‘alayhi wasallam) verbatim, as well as a host of other classical and contemporary jurists.

Those that are hell-bent on dehumanising Muslims frequently take statements that are carefully redacted from hadiths wildly out of context, and pass them off as statements by Muslim scholars, in an attempt to demonise and vilify them.  Another example of this is the hadith, “A man should not be asked “why” he hit his wife,”[11] which has a particular context (and limit) to it when applied in counselling of marital disputes.  Yet another example is the stating of the well known criminalisation in Islam, of public acts of sodomy (in front of at least four sane, righteous Muslim witnesses) in an Islamic state.  Those who try and stir-up hatred of Muslims try to incite LGBT activists against us, by conveniently translating this as a blanket “criminalisation of homosexuals”!

A sad result of all this desperate shooting from the hip in throwing allegations of homophobia, sexism or racism left, right and centre, is that mud sticks.  No matter how many times lies and misinformation is clarified – you still get people trying to push these tired, out-dated allegations.  It’s no surprise to see the Islamophobia world’s finest players turning up in an article or two in the most vile papers[12].  People like Raheem Kassam of the Henry Jackson Society project “Student Rights”[13], who is probably mad that their own anti-Muslim hate preachers are banned from entering the country[14].  Or maybe they’re just bored after student unions across the country have uniformly condemned and shunned them, and supported counter campaigns against them by real students[15].

Unfortunately, nuance seems to be nearly extinct in our 150-character-or-fewer, 30-second-or-less sound bite culture.  My main message is about these Islamophobes.  If they have no shame, then they may lie, misrepresent and incite hatred against us as they will.  As for the neutral readers – now you know the real story, I hope.  Just take a look at some of the threatening comments in the articles demonising Dr Haitham al-Haddad, or the death threats underneath the YouTube video embedded in it, and ask yourself who the real hate preachers are.