Church bells toll but are the mosque mimbars silent? 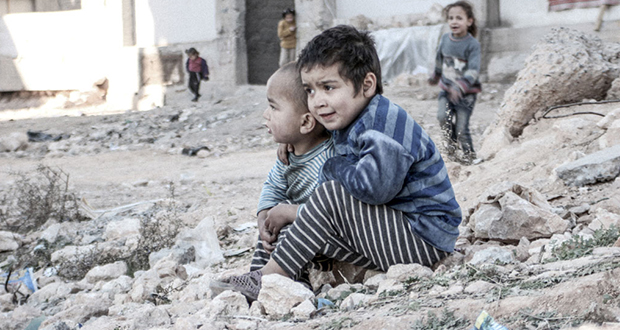 The Russians and the Syrian regime have supposedly agreed to a ‘humanitarian pause’ and opened ‘humanitarian corridors’ in Aleppo. The big question is – was this a genuine humanitarian gesture?

The answer, unfortunately, is an unambiguous, categorical, undeniable and definitive, NO. We are not fooled by words and gestures, when actions clearly demonstrate otherwise. What humanity is there, when they:

This was certainly no humanitarian pause. The last four weeks have seen the most devastating bombing campaign in history, together with the start of their ground offensive.  Quite unbelievably, they have made zero territorial gain in Eastern Aleppo. This so-called ‘humanitarian’ pause is actually only a means by which to reassess their military options and to restock their armouries – as the recent passage of Russian war ships on the English Channel suggests.[4]

These humanitarian corridors are merely a PR exercise and a trick to kill more civilians and rebels. It has already been reported by a news team on the ground in Aleppo that a small group which tried to pass through one of these ‘corridors’, following the advice given by the regime itself, were shot at by the regime.[5] Who can ever trust ‘humanitarian corridors’ concerning the Russians when we know, only too well, what they did in Grozny.[6] In February 2000, a ‘humanitarian’ corridor which led to a village called Alkhan-Kala turned out to be a minefield which killed hundreds of rebels. Those who managed to survive the mines were then killed by artillery and rockets. So much for their ‘humanity’. The brave and dignified people of Eastern Aleppo are too wise to fall for such tricks.

War is supposed to have some sense of honour between warring armies – but not so in Aleppo. This is a ‘war’ fought against women and children; beautiful, innocent toddlers for whom cluster bombs are now ‘toys’.[7]

Wars are supposed to be fought through respecting internationally accepted laws, norms and conventions – but not so in Aleppo. Not only are hospitals bombed as a matter of course, they are obliterated through the use of bunker busting bombs made for use against fortified military installations.

Wars are supposed to be fought between warring parties with defined and recognised leaders – but not so in Aleppo. Bashar Al-Assad leads his army of fanatics against an army of the people of Syria.  Who is their leader? Who will do their negotiating? In fact, who is there to even listen to their side?

Three hundred thousand people remain trapped and are being starved and slaughtered. As the UN High Commissioner states:

“these are crimes of historic proportions”.[8]

Who is there to stop this crime?

Who is there to lament for this tragedy unfolding before our eyes?

Our Muslim brothers, sisters and children continue to die agonising deaths in Aleppo. Christian church bells toll around the world in solidarity and for the injustice and suffering of the people of Eastern Aleppo.[9] Surely, it falls on the mosques of the world to remember the Muslims of Aleppo more so than it does on the churches of the world. It is more a duty of the mimbars of our mosques to call out against the injustice of Aleppo rather than the bells of churches.

O Muslims, where is our conscience?

Where is our heart?

Where is the Ummah of our beloved Prophet (sall Allāhu ʿalayhi wa sallam) who said,

“The parable of the believers in their affection, mercy, and compassion for each other is that of a body. When any limb aches, the whole body reacts with sleeplessness and fever.”[10]

Surely we can all, at least, remember them in our duʿā’s and Tahajjud prayers. The Prophet (sall Allāhu ʿalayhi wa sallam) said:

Those of us who are able should do more, such as holding special awareness programmes. We can even help support the refugees who have managed to escape the horrors of Syria and have arrived in the UK from giving food, money and even offering spare rooms in our houses.[12]

One of the worst things we can do during these times of hardship is acquiesce to the plan of shaytan and his troops to divide us, and preoccupy us with those things which lead to our division and thus destruction. Indeed Allah has warned us of a definite recipe for disaster and thus a means for protection:

“And obey Allah and His Messenger, and do not dispute and [thus] lose courage and [then] your strength would depart; and be patient. Indeed, Allah is with the patient.”[13]

May Allāh bring an end to the injustice of injustices which is the ‘war’ in Aleppo. Āmīn

[2] There are just 5,000 cans of formula left in Aleppo for the city’s babies http://www.mirror.co.uk/news/world-news/syrias-babies-running-out-milk-9043746#ICID=sharebar_twitter

[9] Church bells around the world toll for civilian casualties in Aleppo http://reut.rs/2ee1Azx