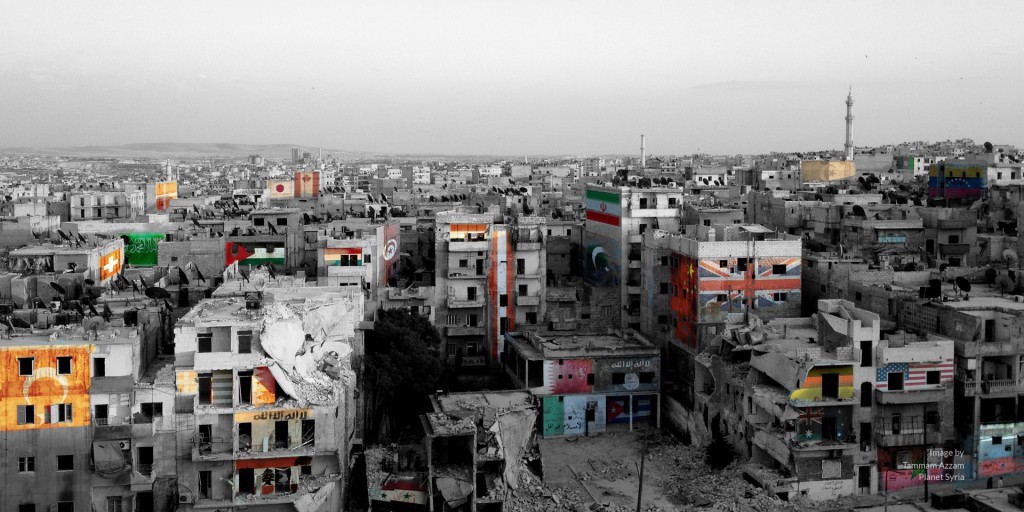 #AleppoIsBurning – A Genocide, a Watchful Lord and an Appointed Time

Over 200 Syrian civilians were murdered in the span of 48 hours in the latest escalating onslaught on Aleppo. So it continues, bolstered in part by an active coalition of Russian military and sectarian mercenaries, and more a passive multi-national league of connivers within what is now a de facto, Russo-American understanding on Syria.[1]

Dr Muhammad Waseem Maaz, the city’s most qualified paediatrician, was killed among other medical personnel and civilians.[2] Another strike obliterated a clinic in al-Marja province, which provided dental services and treatment for chronic illnesses. More than 50 civilians were killed, including two doctors, in the strike that targeted the ‘Doctors without Borders’ (MSF) facility,[3] and scores of women and children in barrel-bomb attacks that followed in Aleppo, Northern Homs, al-Rastan, Hama, Idlib and the suburbs of Damascus. Responding to this unprecedented aerial escalation, Aleppo’s Shari’ah Council issued a Fatwa suspending the obligation of performing Jumu’ah Salāh, urging it to be carried out in people’s homes.[4]

All of this barbarism on behalf of the Syrian Regime—which is yet to be formally classified by a single regional power a terrorist regime, or one that supports terror—comes amidst a cleverly crafted facade of a supposed cessation of hostilities at Geneva. This cessation never actually happened, but maliciously exempted what the Syrian Regime and its Russian counterpart managed to exploit for the purposes of their genocide; those mysterious “other terrorist organisations”. The 22nd of February agreement by the ‘International Syria Support Group’ (ISSG) in Geneva, stated:

“Other terrorist organisations” apparently fill Aleppo’s neighbourhoods, according to the despot himself, “millions of the Syrian population nestle tens of thousands of terrorists.”[7] That is everyone. While for the Russians, all opposition forces fall under this exemption, including delegates of the Syrian opposition to Geneva, and key negotiators with whom the Sergey Lavrov is negotiating.[8] And as such, we call it genocide, “the deliberate killing of a large group of people, especially of a particular nation or ethnic group.”[9] Aleppo is burning and the world is watching.

Such never escaped the wit of the US or its ‘Friends of Syria’ counterparts. In fact, it is through the dubious terminology that most negotiating parties have stakes in the current genocide on Aleppo. Or more explicitly, Aleppo’s unfolding genocide is part and parcel of what the US Secretary of State termed a ‘better understanding with Russia’.[10] A comfortable, much better US understanding with the military responsible for the death of 6000 civilians in six months and 1,500 opposition troops other than ISIS,[11] entire districts and internationally run hospitals,[12] the most ardent of Bashar’s allies. Countless killed and maimed and a Diaspora of incalculable scale. Syria is “being emptied”[13] and gas attacks are now customary, but,

“Today I think it is fair to say that we reached a better understanding of the decisions that President Putin has made of late and also of the path forward in Syria.”[14]

Alongside the US Secretary of State, we Muslims too are enjoying a better understanding: a better understanding of how to truly forsake dependence on anyone other than Allāh. A realisation that victory comes after adversity, with a state of mind satisfied with patience and propped by an impenetrable attachment to One in the heavens Who is never overpowered. Today in Syria, the only desperate cry, sung in marches, resonating from Mosques, raised over the heaps of grey rubble is: ‘Yā Allāh, malnā ghayrak yā Allāh,’—we have none but You O Allāh! Much like the eternal reply, related by Allāh on the tongue of the Prophet’s (sallAllāhu ‘alayhi wasallam) companions:

“Those to whom people said, ‘The people have gathered against you, so fear them.’ But that merely increased their īmān and they said, ‘Allāh is enough for us and the Best of Guardians.’”[15]

And then the result,

“So they returned with blessings and bounty from Allāh and no evil touched them. They pursued the pleasure of Allāh. Allāh’s favour is indeed immense.”[16]

A better understanding of the world’s partial dynamics of sympathy, and its emotional detachment from genocide in the right of Muslims, callous and inhumane enough to shun even those fleeing it,[17] to unfasten our closed eyes from seeing the Door of Allāh, readying us to flee to Him, displaying our need to none but Him:

“Is Allāh not enough for His slave? Yet they try to scare you with others apart from Him. If Allāh misguides someone, he has no guide.”[18]

A better understand of our capabilities as an Ummah, revealed after decades of helplessness. Immense feats on the battlefield, only comparable to the opening of Tustur, Hittīn or al-Qādisiyah, fearless selflessness, momentous, īmān-inspired patience on part the mothers and sisters, earnest aid, education and humanitarian work, writing, speaking, campaigning, shoe-box initiatives and convoys and reigniting of unity between us.

But above all tearful, sincere supplication to Allāh. A better understanding of He, ever-Watchful, Who can confer victory in an instant. Allāh, the Establisher of Kingdoms and the One Who overpowers them.

“He destroyed ‘Ād, the earlier people, Thamūd as well, sparing none of them, the people of Nūh before – they were most unjust and exorbitant, and the Overturned City which He turned upside down.”[19]

What are pathetic Russian Mig 29s or US Su-35s or jittery British Harriers when Allāh turns the tides and avenges His slaves for five years of accumulated oppression? Thus, and with Ramadān approaching, the situation intensifying and war one of make or break, whose supplication for the people of Syria will be the one answered? Which one will take them to victory and turn the chapter in the blessed land of Shām? Maybe yours.

Aleppo is burning. Allāh will not ask you and I why we did not overthrow Bashar al-Assad or anything else equally outside our power. He will, however, ask us as to what we did which was in our ability. Over the next seven days there will be worldwide protests in support of the people of Aleppo.[22] Where will you be when it comes to a city near you?

In a Facebook post, on the 29th of April, 2016, Sheikh Saleh al-Maghamsi, posting from a Da’wah event in Spain, reiterated that nothing is occupying his mind but the massacre against the Syrians, before pleading,

“O Allāh, if I have a single prayer that is answered, then destroy Bashar al-Assad and his helpers.”