Are Refugees More Welcome in Churches than Mosques? 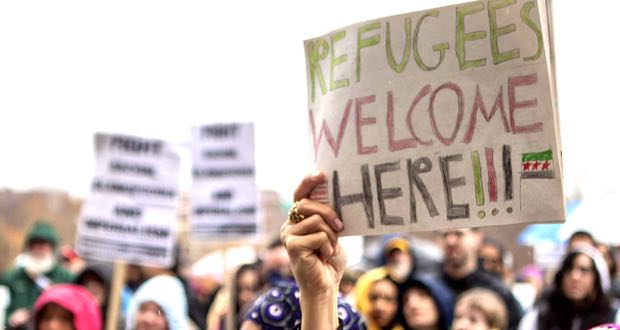 The Guardian newspaper recently ran a story about the Reverend Sally Smith,[i] a vicar from Stoke-on-Trent, hailing her as a present-day Good Samaritan. The vicar is indeed worthy of such praise as she has wholeheartedly welcomed refugees into her parish and into the Christian community. She has provided the newcomers with basic needs: food, shelter, clothes and medicine, as well as emotional and spiritual support. The newspaper reports her as saying:

It is a heart-warming story as it unfolds to show the empathy, kindness and generosity of the vicar. The refugees have been so moved by this outpouring of friendship and generosity that some have even embraced the faith of their benefactor and converted to Christianity. Thus, the demographic of those at St Marks has been transformed, much to the dismay of some of her congregation who have left appalled at the growing number of multiracial attendees in their little church in the heart of England.

The newspaper reports that mass baptisms are taking place as refugees adopt a new religion. But, where are their Muslim brethren? This, indeed, is the most telling part of the story; one refugee describes being homeless, cold, hungry and penniless. When he approached a mosque and begged to stay the night, he was turned away. This story and the resulting disappointment felt by the refugees is shared by others in the group.

As an Ummah, we feel for our Muslim brothers and sisters throughout the world. We are hurt at the plight and anguish of those caught up in conflicts or burdened by poverty. We give donations freely to help ease the misery of those who are subjected to oppression and help bring comfort and hope to those who are destitute and weak. We pour millions of pounds to help relieve the situation of those who are in limbo – stranded refugees – swelling the numbers of UDPs around the world. But, what happens when those same people we are desperate to help arrive on our shores and stand helpless at our doorsteps?

Of course, mosques are first and foremost places of worship and there are rules to be adhered to. However, let us not forget the functions of the original mosques: the mosque of the Prophet (sall Allāhu ʿalayhi wa sallam) was, amongst other things, a sanctuary for travellers, a religious school for knowledge seekers, a court (a place for arbitration) and a community centre.

Mosques in the UK have to deal with tight budgets and sometimes even tighter-lipped committee members and it is common to see a stolid attitude as to the allocation of funds. It is apparent that mosques are not as appealing, outside of prayer times, as they could be, but this is a two-way dialogue in which Muslim community members have to be more actively involved in their local mosque. Many complain about mosques from the comfort of their own armchairs. But those that approach those involved in mosque administration, those who proactively find out about their initiatives, get up and volunteer time and resources to bring these plans and ideas to fruition are few and far between.

There are a growing number of mosques around the UK that act as distribution centres for food banks.[ii] Sufra organisers say many Muslims now “increasingly feel they have a responsibility to the wider community and the problems here in Britain”.[iii] A shining example of this is when Birmingham Central Mosque opened its doors to the homeless on Christmas Eve last year. One of the organisers of the charity drive said:

“We are open anyway and it’s nice to be able to help when it’s needed most […] Birmingham is an amazing city that thrives on diversity and together as one community we can unite as one to tackle poverty.”[iv]

The mosque now boasts a permanent food bank thanks to a bequest. This is a small token acknowledging the needs of the local people but, inshaAllāh, it will go a long way in developing community spirit and demonstrating the Muslim community in a positive light.

Over fourteen hundred years ago, the Anṣār welcomed the Muhājirūn with open arms and Allāh (subḥānahu wa taʿālā) praises their brotherly love in the Qur’ān:

“Allāh has forgiven the Prophet, the Muhājirīn and the Anṣār who followed him in the time of distress.’[v]

So, let us be like the Anṣār and welcome our Muslim brothers and sisters who have fled from their homelands in hopes of a better life and let the masājid adopt the slogan popping up outside churches around the country: Refugees Welcome Here!