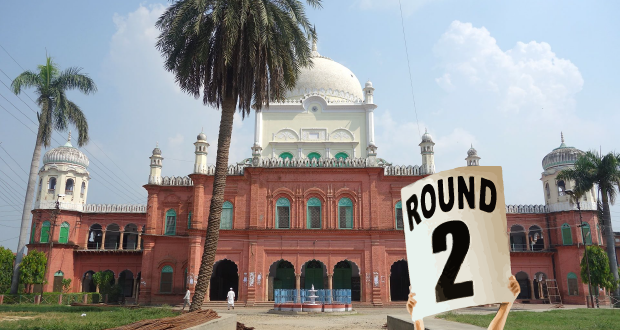 You’re Having A Laugh

It was with baited breath and eager anticipation that I awaited the main course of a two-part BBC Radio 4 programme entitled the ‘The Deobandis’.[1]

Last week’s starter was not at all appetising to the 600,000 so-called ‘Deobandis’ in the UK.[2] In fact, based on reviews since the programme has aired, far from just leaving a bitter taste in the mouth, it has left a significant percentage of the British Muslim population feeling metaphorically sick. Bennett-Jones cooked up a first episode which was about as representative of ‘Deobandis’ as Delia Smith is of traditional Indian cuisine. This is hardly surprising when some of the ingredients consisted of so-called ‘Deobandi’ experts who, themselves, are well-known in their animosities against them. They included an atheist who is a living testimony to the book ‘The God Delusion’ and a gay Barelwi and self-proclaimed Tablighi Jammati, whose likelihood of having ever participated in a gusht or tashkeel was thoroughly indigestible. Fact is stranger than fiction – who would have believed that such a cacophony of misfits could be brought together as voices to represent ‘Deobandi’ Muslims?

Part two started with the proverbial ‘Deobandi’ neck on the block and Bennett-Jones positioning for a swift and easy finish.

The programme covered four main themes as part of the final episode: an interview with Aiman Dean, a former Al Qaeda member turned Mi5 agent; the visit of Masood Azhar in 1993; the role of Khatme Nubuwat and, finally, the battle between conservative Islam and the so-called ‘reformers’. All four themes served only one purpose – to demonise ‘Deobandi’ Islam.

Aiman Dean proclaimed that, during his time as a double agent, he was courted by numerous people to appear and talk about his experience as a jihadi. He even claims to have toured up to 25 mosques, many university Islamic Societies, workplace prayer rooms and private homes. This is quite an audacious claim to make, which is barely hinted at in a BBC article dated the 3rd March 2015.[3]

For an investigative journalist such as Bennett-Jones to pass up the opportunity to ask the names of mosques and universities where Dean claims he spoke is either a sign of incompetence or, more likely, an indication of the voracity of the claims being made by this individual.

The issue of Masood Azhar’s visit to the UK in 1993 was such old news that it required carbon dating of publications found in Pakistan. Azhar may well currently be classified by the USA, UK and India as a terrorist, however this was certainly not the case then. Back then, the BBC itself was riddled with the likes of Saville, Harris, Hall and others. No one cast any such aspersions on BBC employees being paedophiles. Rather, systems were developed and procedures put in place to prevent a reoccurrence. However, this is not a luxury afforded to ‘Deobandi’ institutions by the BBC’s very own Bennett-Jones.

As British as they come, Toaha Qureshi (MBE) was next in Bennett-Jones’ firing line. His grilling on national radio centred primarily around his mosque’s links with Khatme Nubuwat. Bennett-Jones made attempts to suggest that Khatme Nubuwat in Pakistan indirectly (however more accurately – viewed upside down with a squint and wearing 3D glasses) supports violence, particularly towards the Ahmadiyya community. All very serious. The conversation turned to a contentious leaflet found at his mosque:

OB-J: “Our researchers found them.”

TQ (MBE): “Researchers must be from the Ahmadiyya group?”

OB-J (very assertively): “I’m sorry no. A BBC researcher who has no religious stake in this. You can’t throw that kind of slur at people.”

For someone who makes his living out of slurring people, hearing Bennett-Jones lecturing others made me chuckle.

Finally we had Aamer Anwar, human rights lawyer, making a guest appearance.  Anwar’s appearance was linked to the power struggle at the Glasgow Central Mosque, for which he has played a pivotal role.[4]

Anwar’s position is one of reform; to take the “soul of Islam” into the 21st century. He went on to say that the reformers had adopted roles in the mosque committee to bring about “equality”, “reflect diversity” and to bring females into mosque committees.  This is quite a revolutionary position from an individual who had previously been a revolutionary socialist and, until well into his adult life, an atheist.[5]

So what does this all mean?

Bennet-Jones concludes that the purpose of the programme was to instigate a “rational debate”. He went on to state that most ‘Deobandis’ reject violence, however he believed it was time for “engagement and integration.”

Though this may be the official position, the reality is that this radio series was pure, unabashed political propaganda. On 19th January 2016, Bennett-Jones delivered a lecture at St Peters College, Oxford, on the ‘Causes of Radicalisation of British Muslim Youth’.[6]

Given that this lecture was delivered less than three months ago, I would have thought that it would have been littered with references to ‘Deobandis’ by our chief investigator. Despite the fact that the lecture was very thorough, detailed and well-documented, there was not a single reference to ‘Deobandis’.

This comes as no surprise when one considers that Bennett-Jones has not been above playing the political card in his journalism in the past. As the former BBC reporter for Pakistan, he caused a political storm by stating that the Muttahida QaumiMovement (MQM), a Pakistani political party, had received funds from India.[7]

Bennett-Jones went on record to state that the sources were authentic and that he stood by every word. Unfortunately for him, his mercenary journalism was exposed by statements made by the Metropolitan Police.[8][9]

To add the icing onto this half-baked documentary, news emerged of clear and evidenced links between the BBC and government departments in relation to ‘Deobandi’ Muslims. An article published on the blogging platform, Medium, by investigative journalist Dr Nafeez Ahmed, provides a statement from BBC Assistant Editor Innes Bowen admitting that she had provided a briefing to Whitehall officials on the 12th February 2016.[10]

I believe this radio series, ‘The Deobandis’, is part of a calculated political ploy to demonise this form of conservative Islam, termed ‘Deobandi’ Islam. It is a precursor to implement government policy to affect all Muslims, not just ‘Deobandis’. There is no doubt that these policies will aim to reform, deform and drag our beautiful religion into the so-called 21st century.

Despite the head chef’s credentials, I will pass on this particular main meal. I would much prefer a good old British favourite – fish and chips. But, knowing the BBC, we will probably get further servings and repeats in the future.

“You’re having a laugh.”