Condolences upon the death of Sheikh Ghulam Azam 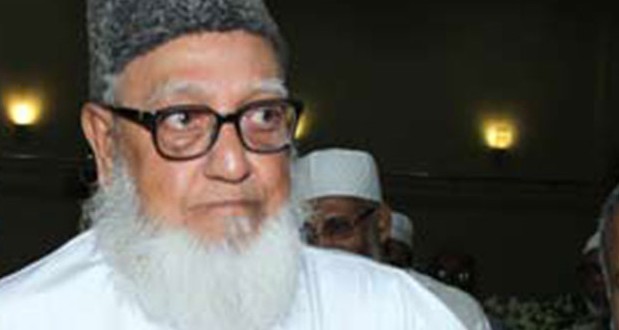 Islam21c would like to offer its heartfelt condolences to the people of Bangladesh upon the passing away of one of their eminent leaders, Sheikh Professor Ghulam Azam, may Allāh have mercy upon him.

A former leader of Bangladesh’s largest Islamic party, Jamaat-e-Islami, Sheikh Ghulam Azam was one of the countless Islamic activists of that land who sacrificed the comforts of this world in order to rescue and then propagate Islām in a country facing an unparallelled onslaught against its faith and principles, both from within the country and from outside.  He was one of the many Bangladeshi Islamic activists and scholars who had an unwavering stance to uphold the truth; he refused to remain silent in the face of moral and material corruption and therefore faced constant persecution by the reactionary and repressive, anti-Islamic regime in Bangladesh.

Despite the continual plotting against him in his home country, he managed nonetheless to become a highly respected scholar and activist who was loved and respected across the globe. Having died while being imprisoned for his integrity and faith, he joins the list of illustrious alumni of the Madrasa of the Prophet Yūsuf (ʿalayhi al-Salām).  His imprisonment was just one episode of the anti-Muslim saga launched by the ruling Awami League regime who last year killed 2,500 or more demonstrators according to the Asian Human Rights Commission, [1]

It goes without saying that a man of his calibre will be sorely missed. We ask Allāh to shower His mercy upon him and to continue to raise up more dedicated and upright individuals who will continue the propagation of Islām in Bangladesh and beyond.