How Islām brought a Light to English towns 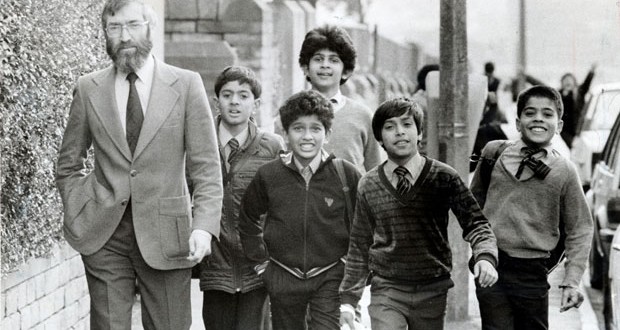 One Muslim’s recollection of growing up in a migrant Asian community in the Midlands.

In recent times there has been an overwhelming influx of discussion in British media about Muslim immigrants, and their assimilation and integration. There is a desperate search for a solution, though the questions being asked, I have noticed, are very selective.

Having been a keen observer of this subject since my childhood, and having been a part of that experience, I feel it my duty to shed some light on this issue. I am drawing on very personal, historical, social, psychological, emotional, economical and even spiritual facts, all of which I believe are concrete and have in some way shaped who we are today.

In today’s world, we live a hurried and transitory life. We often lack depth of purpose or time for contemplation, however, when we look to history we find we cannot distort or erase substantial historical facts. It is deplorable to see the wrangling over Muslim immigrants and treating them as ‘aliens’ trying to invade the country, or as seafarers who raided the British Isles.

Among all the Muslims in the UK a large percentage of the Muslim community arrived from a particular region called Jammu and Kashmir. Mass migration occurred after the Second World War, when Great Britain invited people to help rebuild its war-torn land from commonwealth countries such as India and Pakistan.

When our fathers and uncles came to Britain they were in their twenties or barely passed their teenage years. Our grandfathers were middle-aged men who only came for work, leaving their families behind because they could not imagine ever settling down in a land thousands of miles away from their ancestral home. Everything was different: weather, race, food, language, religion and so on. Men came as labourers, especially from Jammu and Kashmir, as it was commonplace to set sail to faraway lands like Sydney and Cape Town, but never settle there. They would always travel for a time and then return to their families.

As such, when these men arrived in the UK with visas and passports, they had brothers, cousins, fathers, even second and third cousins, but they had no women or children with them. In the late fifties and early sixties a few men dared to send for their wives when they had reached economic stability. During the seventies it became a trend to bring family members over from abroad. I remember witnessing families torn apart and individuals living lonely and tough lives. It was pitiful to observe, but I now understand that it was their test, and Allāh knows best.

What fascinates me the most is the outcome of this migration and its continued effects up to this day. As a civilised nation, the British people were, and many continue to be, very tolerant and polite people. The Muslim or predominantly Pakistani populated areas in the eighties and nineties were extremely deprived. The rates of unemployment were at a high, and there was a peak in crime rates with no clear direction or ambition for the youth. And then, the turning point. In the late nineties people started to discover Islam. Not the way their parents had practised it, with cultural tags and customs, but the way it is. This inevitably caused a moral panic in society, with a rising concern over the female dress-code and men with beards. It seemed as if there was a fear of British society being reverted back to the “dark ages”.

However I believe that, from an unbiased perspective, this was pivotal in seeing a positive change for British society. There remain closed perspectives that are relentless in their hate towards Muslims and disapproval of those living in less reputable areas such as in the Midlands, the North and other such places. Though these areas may not be visually appealing, it is as a result of the move to build matchbox homes for the scores of factory workers milling into the cities. The roads are narrow and the graffiti on the un-plastered brick walls have been there for over 40 years. What is amazing, however, is to see the standard of living of the people; to see inside their homes. Clean and organised, they manage to be a part of their extended families. What relaxed and peaceful lives do they live, and how polite are their youth. It is truly incredible. How is it that second and third generation British youth have learned such behaviour? What keeps them sane in a world driven to chaos and insanity?

Could it be schools? Youth clubs and organisations? I do not believe it is. After school these children had nothing positive or productive to do. Many would loiter around on streets and experiment with drugs, knives and even guns. It is unfortunate that even today there are young people who are still deeply involved in this. There were very few parks, green spaces or places where the youth could engage in sports and other positive activities. It is likely that it was during this time that drug-related crimes were at a peak, and yet now we are witness to an enormous and positive change for the rest of the society. At one time many of the white British living in these areas sold their houses to distance themselves from the increasingly Asian-populated areas and the poorer members of society were left behind, worrying over their prospective and almost certain ‘extinction’. And now, were we to ask these same people how they feel about living alongside Muslims the answer would be one of a sense of security and safety. They are sheltered in this cruel time in which even our elder citizens are murdered over a few meagre pounds.

It is in these areas which are densely populated with Muslims where we find an elderly lady in a waiting room of a doctor’s surgery asking for someone to tie her shoe laces, and the immediate aid of young Muslim men and women. We find an elderly gentleman in the A&E screaming for attention and company and comfort offered by Muslim men and women. If this is not integration, then what else could it possibly be? This neighbourly concern and attitude towards the elder generation is common in these, unfortunately named, areas called ‘Ghettos’; what an insulting social definition for the decent human beings living there.

There is no denying the heinous and filthy crimes some members of the Muslim community are involved in. However, these are exceptions and not the norm of Muslim households. These cases illustrate the social and psychological issues that are manifest in these deprived areas. The youth involved in these wretched crimes are lost and confused. They are a product of a fractured society. They receive no education at schools and no tarbiyah (nurturing), love and support in their homes. We cannot forget the efforts of the majority of good Muslims for a few – those who feed the children of alcoholic mothers and absent fathers. Is this not integration? They sympathise with the despondent just to please their Lord. A stark contrast to those with reputable jobs, impressive degrees and thriving businesses who are chained to their individualistic desires; those who have abandoned their family members or community members, leaving them to the police, social workers or psychiatric hospitals.

So, how did such positivity come about? What is the source of this transformation when two communities have lived in the same area with the same income, the same concern over unemployment, and the same schools in the same society? Why are they different?

The answer is simple: it is Islām that brought this good. As Allāh (subḥānahu wa taʿālā) says, “You are the best nation produced [as an example] for mankind.”[1] It is the teachings of Islām that raises the downtrodden and elevates them to a level of decency where no education or money can take you. It is the connection with Allāh (subḥānahu wa taʿālā) that gives an individual purpose and peace. Our elders raised their children on good Islamic values. They may not have had scholarly knowledge of the religion or been versed in modern education but most were honest, hard-working, simple and modest people who did everything to the best of their ability. The majority of them were never involved in the ills of society, rather they strove to make a foundation of khair (good). Not only did they leave a legacy of good families but they also gave all their energy by working in harsh conditions, and thus contributed to the British economy. Muslim immigrants have contributed enormously to the beautifully woven fabric of British society and to imagine a world where all the Muslims were to leave the UK would be to imagine a dark, dreary and haunted place. As Allāh says, “Allāh is the ally of those who believe. He brings them out from darkness into the light.”[2]

It is necessary for those biased against Muslim immigrants to perhaps leave this island for a while, to travel around the world and see the beauty and diversity of all that Allāh (subḥānahu wa taʿālā) has created on this Earth. Allāh (subḥānahu wa taʿālā) tells us “O mankind, indeed We have created you from male and female and made you peoples and tribes that you may know one another. Indeed, the most noble of you in the sight of Allāh is the most righteous of you. Indeed, Allāh is Knowing and Acquainted.”[3] In this way they might then come to appreciate the beautiful lands or the rich heritage and exotic culture of the Muslims.

Let us end with another of Allāh’s descriptions: Khayr al-Mākirīn (The Best of Planners). And Allāh (subḥānahu wa taʿālā) knows best.