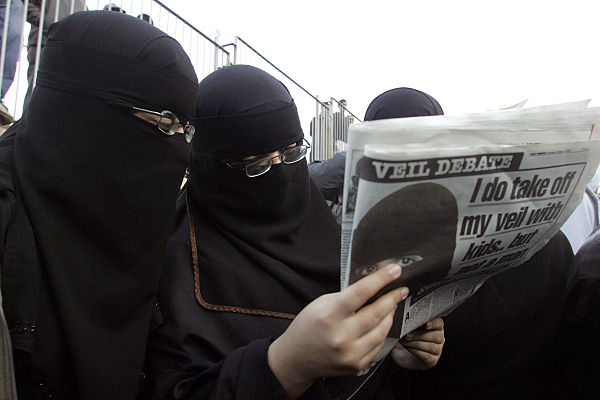 The burqa, a form of Muslim dress covering women from head to toe, including their faces, is oppressive, says the president of France. He wants it banned.

“The burqa is not a religious sign — it’s a sign of subservience, a sign of debasement. It will not be welcome on the territory of the French republic.”

As per statements of Nicolas Sarkozy about his wishes to ban the burqa in France it is necessary to provide some advice on the matter as the debate is being brought to the door step of UK and many Muslims are caught unaware, not knowing how to articulate an accurate Islamic perspective on the issue.

There are generally three methods to answering questions when being interviewed: focussing on the content, the delivery of the content, and lastly the perception of the audience. Muslims being interviewed on Islamic issues tend to focus solely on how the audience will receive their answers and tend to loose track of the real content that needs to be addressed. In stark contrast the Quranic dialogue with non-believers is very much content focused; delivered in an awe-inspiring way. We too, as followers of the Qur’an, are commanded to “Speak the truth” albeit with wisdom and eloquence. Our prophet told us that whoever tries to please the people at the expense of Allah’s pleasure will certainly displease Allah and also find that the people eventually dislike him and that whoever speaks the truth to please Allah will find that the people will end up liking him.

In light of this I would like to provide some answers to frequently asked questions by non-muslims, be they our neighbours or from the media, which I hope will empower us to take the debate forward constructively. The following is a series of video FAQ’s dealing with the continuously resurfacing of the Niqab ban debate and below that is a summary of my answers to some of the most common questions in the public discourse.

1)Why do we muslim women wear the Burqa (face veil)?

We as humans were created by an all-Knowing all-Wise being, He blessed us with the short life of this world and then an eternal abode in the Hereafter. The purpose of this life is to achieve success in passing the trials and tribulations God has decreed for us; the greatest test being sincere submission to His divine Will. Abiding by the guidelines and legislation decreed by God brings harmony and tranquility to the hearts of the believers which is then followed by eternal happiness in paradise. Every piece of guidance legislated by God has copious amounts of goodness and wisdom behind them including the dress code of both men and women.

Muslim women who adopt the face veil are merely exercising their belief of following the guidance of their Creator in order to earn His pleasure and reward. The wisdoms behind the injunction, such as protecting women from abuse and harassment, are of peripheral value as the main aim is to seek the pleasure of God.

People usually begin to answer this question from a very defensive stance which implies that there really isn’t a rationale behind this seemingly alien dress code.

2)Would you like all women in the western society to cover themselves up?

We would like all of mankind to live by the guidance of their Creator and understand their purpose in life. Many Muslim women including those who accept the message of Islam do chose to adopt the traditional Islamic dress code.

Interestingly the majority of converts to Islam are women. I recall once a lady had made an appointment with us to take the Shahaada. When we went to meet her we found a woman fully dressed with Islamic attire. When we asked her if she knew of a non-muslim woman wanting to become Muslim she replied that it was in fact her!

3)Does the Qur’an speak about the Niqab?

It is very saddening to see so called ‘Islamic experts’ categorically deny the mentioning of the face veil in the Qur’an when it is in fact mentioned in two specific verses.

O Prophet! Tell your wives and your daughters and the women of the believers to draw their cloaks (veils) all over their bodies (i.e. screen themselves completely except the eyes or one eye to see the way). That will be better, that they should be known (as free respectable women) so as not to be annoyed. And Allah is Ever Oft-Forgiving, Most Merciful.

And tell the believing women to lower their gaze (from looking at forbidden things), and protect their private parts (from illegal sexual acts, etc.) and not to show off their adornment except only that which is apparent (like palms of hands or one eye or both eyes for necessity to see the way, or outer dress like veil, gloves, head-cover, apron, etc.), and to draw their veils all over Juyubihinna (i.e. their bodies, faces, necks and bosoms, etc.) and not to reveal their adornment except to their husbands, their fathers, their husband’s fathers, their sons, their husband’s sons, their brothers or their brother’s sons, or their sister’s sons, or their (Muslim) women (i.e. their sisters in Islam), or the (female) slaves whom their right hands possess, or old male servants who lack vigour, or small children who have no sense of the shame of sex.

Therefore one cannot deny the fact that covering the face is an authentic orthodox opinion held by a great number of scholars based on Quranic texts.

Even if one was to deny its place in the Qur’an this by no means shows that it hasn‘t been legislated elsewhere in the prophetic guidance; the Sunnah. For instance the Qur’an does not specify the number of daily prayers as being five or the obligatory annual charity as being 2.5% but such fundamentals were learnt from the prophetic guidance and are not disputed over by any Muslim.

4)Is the Niqab obligatory?

The question is somewhat irrelevant as their is a consensus that wearing the Niqab is legislated within Islamic jurisprudence. Though a great number of scholars opined that it is recommended, many others thought it was obligatory. Thus, whether it is obligatory or not is not the issue as every Muslim woman has the right to adopt the Islamic dress code regardless. The question concerns those who want to adopt it and would like to clarify their position for theological grounding.

The women who champion the Niqab are raising the standards of modesty in their respective communities. If we say that modesty is essentially covering up ones beauty than of course the face veil does this better than any other garment. However, modesty must be defined in the framework of Islamic tradition and hence it is relative within its parameters. For instance the word Jilbaab is mentioned in the Qur’an and refers to a single garment that covers the body but the style of the Jilbaab are many and depend on the cultural norms of the society.

A common pitfall muslims find themselves in is when the simply refer to the Niqab and Hijab as a means of being modest. This implies that the clothing is completely relative and so what is modest in Saudi Arabia is inappropriate in Miami. And so a revealing dress in Miami would be rather modest as the norm there is a Bikini!

Hence we cannot deny the right of the followers of this established opinion to uncover their faces.

7) Do you wear the Niqab out of free will?

We encourage each other to perform acts of piety and righteousness. If I felt that my dearest and most beloved were going off the rails I would help them and actively advise them do change their ways. I would advise the women in my family to adhere to Islamic dress code because it is calling for righteousness.

8) Is the Niqab a security issue?

There should always be a spirit of tolerance and forbearance in people, especially the natives as where ever there is a will there is a way. Muslim women who are accepted for who they are will be more appreciative of the state and help to develop stronger ties of cohesion in their communities. Forcing Muslim to uncover there faces will sow seeds of mistrust and even hatred with the state. And so banning the Niqab would be grossly counter productive.

9) Is Niqab a symbol of subjugation

Revealing clothes are indicative of subjugation of women by men.

What is the criteria to judge?

This allegation is unfounded? Prove it.

Prostitution has its home in Europe and this is clear enslavement and oppression of women by men-Not Muslim men!

Ironically the women that seem to be adopting the Burqa are not those of 1st generation but the Western educated women who have been born and brought up in this count.