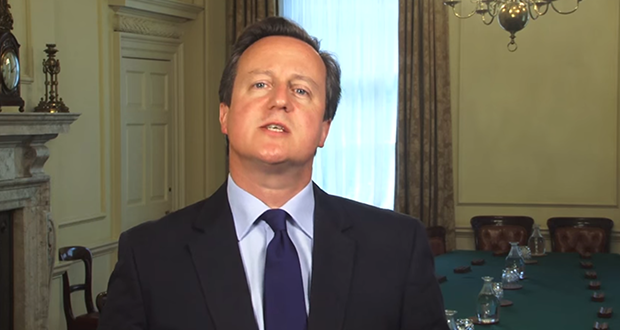 Cameron, are you really welcoming those who fast Ramadān?

It became a fashion for many leaders to greet Muslims with one hand, even whilst killing them with the other. Barack Obama, as the president of today’s most aggressive hegemony started this “Sunnah” and other puppets followed. I have even seen a message wishing “Ramadān Mubarak” delivered by one of the Commanders of the Israeli army, whose air forces rain Ramadān gifts on the heads of the people of Gaza every day.

In his recent short message, David Cameron wished Ramadān Mubarak to British Muslims and he gave us a good reminder about what Ramadān is about. In fact, I was planning to record a reminder about Ramadān myself but when I heard Sheikh Cameron’s I thought to myself: this is a good reminder. Ramadān is a time for contemplation and reflection according to Cameron so let us reflect on his message.

Did Cameron become an extremist?

To start with Mr Cameron celebrated that Ramadān is “an incredibly special time of year for Muslims at home and abroad.” Hence, Mr Cameron acknowledged that there are Muslims like us who fast Ramadān in other parts of the globe. The question is, who are those Muslims? Who are those whom we help because they are “suffering in wars and famines overseas”? The answer is clear; they are nothing but part of our beloved Ummah. Therefore, Mr Cameron has no problem of British Muslims being part of the Ummah. It is a great achievement for Mr Cameron to have undermined the malicious loaded-questions many of his neoconservative friends use to incite suspicion towards British Muslims, such as: “Are you British first or Muslim,” “Do you believe in a global form of Islamic Unity,” “Do you belong to the Muslim Ummah or to the British Isles?”

Mr Cameron then complemented the Muslim community for its charitable work and acknowledged that it is the most charitable community in the UK. “Here in Britain, Muslims are our biggest donors – they give more to charity than any other faith group.”  Perhaps he forgot to mention, however, that Muslim-run charities are among the most targeted and victimised by his government because of the good work they do. In the last few months, the Charity Commission has been investigating a disproportionate number of Muslim-run charities, allegedly due to its being taken over by those with an extreme anti-Muslim ideology, to the protest of most of the general public [2]. I wonder how many more Muslim Charities and individuals will be harassed because of the “millions of pounds raised for good causes for those less fortunate than us here in Britain, and those who are suffering in wars and in famines overseas.”

Moving on to other elements of his speech, it is evident that Mr Cameron is praising Muslims participating in fighting and killing overseas. He said “This Ramadān, I hope that we can reflect upon a key aspect of our shared history: the bravery of those who fought and died for our freedoms nearly 100 years ago.” Will he be called a Jihadist for this? Is he not glorifying those who fought in the pursuit of political or ideological change? That sounds awfully familiar to today’s popular definition of “terrorism”. I hope that he does not join ISIS and their “Islamic Caliphate”.

His words, according to his own government’s rules on what Muslims are allowed to believe or say [3], are rather militant. “More than a million men and boys from India fought with our troops during that conflict and many thousands of them were Muslims. They travelled right across the world to fight to defend our freedom, guided and sustained by their bravery, their comradeship, and above all, by their faith.” I wonder if their home countries took away their passports [4], arrested them upon their return [5] or otherwise created a hostile atmosphere of suspicion around their international military adventures [6].

He also reminded us, “Ramadān is a time for contemplation, to fast, and to pray, and to think deeply about others.” It is a good thing that he reminded us about the spirit of Ramadān, since we have to learn about it somewhere, since his government is working tirelessly to close down those “extremist” schools and “Madrassas” that teach children about Islām and Ramadān, thus trying to ruin the long-built cohesion of communities by acting on sensationalist, anti-Muslim fabrications and scaremongering. If his friends, Theresa May and Michael Gove, do succeed in closing down Islamic faith schools, forcing their narrow, intolerant interpretations of “British values” on independent Madrassas, and banning scholars and speakers from speaking in universities and mosques, then we will have no one to teach us about Ramadān and Islām except Sheikh Cameron and company.

Despite his friends cracking down on those trying to teach people about Islām—since it is counterproductive to those who rely on widespread ignorance to malign Islām and Muslims—Sheikh Cameron does seem to be a keen supporter of Da’wah.  He said he was “delighted to see how many community iftārs were taking place across the country in mosques and in community centres, in parks and even tents.” I hope he has finally discarded his friends’ neoconservative jihad to incite hatred and suspicion in the hearts of the average citizen towards their Muslim neighbours by painting them out to be “extremists”, since he praised “hundreds more communities, from Leeds to Luton, Woking to Manchester, throwing open their doors so that people of all faiths and none can break bread and get to know their neighbours.” I wonder if there was any wine or pork at these iftārs, or if they were organised by “extremists” who aren’t “British” enough to have that.

It is obvious that some of the key values Ramadān and those extremist Madrassas teach are at odds with some people’s British values. For example, one of the key principles Ramadān teaches is that our most basic, almost animal-like desires do not control us; we can control them. This is somewhat at odds with those who give moral-legislative powers to the whims and desires of the human being, whether it be a knee-jerk aversion to sharī’ah punishments, or a strong desire towards acts of sodomy, homosexual relationships, sex outside wedlock, and so on. I’m glad that the new Sheikh Cameron, unlike before his apparent Ramadān epiphany, does not seem like he will proceed with silencing and prosecuting those who express the futility of obeying the lowly human soul in all its demands.

The real point of Ramadān

Having said all of this, I have to say that Mr Cameron missed the most fundamental point of Ramadān. He missed the main reason that Muslims fast long hours and are pleased with it while the rest of society is enjoying a nice British summer: it is their extreme attachment to their Lord and their Islamic identity. So-called “extremist Muslims” obey their Lord even when it is difficult or unfashionable; otherwise they would not so happily fast long hours in summer, and instead they might want to adopt a liberal version of Islām and shift Ramadān to the winter months.

Mr Cameron, We fast Ramadān as an act of submission and worship to the One and only Creator. Allāh says,

We are not fasting Ramadān as a cultural activity. We as Muslims want goodness for the whole of humanity and the greatest goodness is surrendering to Allāh, the Creator. We invite you as you are saying Ramadān Mubarak to testify that there is nothing worthy of worship but Allāh and Muhammad is his final messenger. We call everyone for this testimony before they meet their Lord with regret. We wish a real “Ramadān Mubarak” to all.