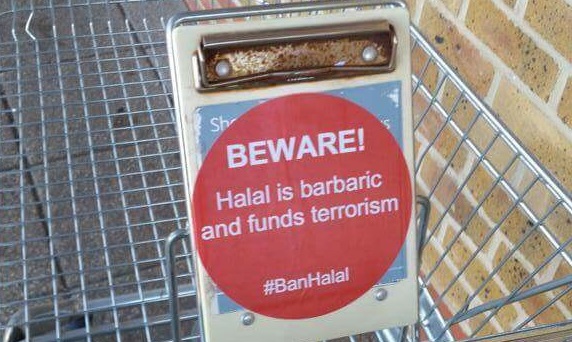 To take urgent action to protect religious slaughter in the UK and EU, sign now at:

The last few years have seen a steady stream of sensational headlines seeking to ban religious slaughter, particularly halal. A recent online petition demanding the British government to prohibit the slaughter of animals without stunning has reached over 100,000 signatures. The UK’s largest animal rights group, Animal Aid, quickly followed this up by choosing to highlight the abuse in a halal slaughterhouse leading to more dramatic headlines in the media. The campaign group, which has secretly filmed inside eleven UK abattoirs since 2009, has found ten of these breaking the law. But wait – how many of the investigated abattoirs were for non-stunned halal meat? Only one; the other nine abuses Animal Aid recorded were at slaughterhouses for non-halal slaughter. Some of these were ‘high-welfare’ plants, such as those accredited by the Soil Association and Freedom Food. Despite this, the public is not being asked to debate the way that animals are being treated in all slaughterhouses, but, bizarrely, about how Muslims and Jews kill animals for food. One cannot help but wonder that the hysteria about halal and kosher is more to do with rising Islamophobia and Anti-Semitism than anything to do with animal welfare.

In 2011, Animal Aid’s filming of the abuse of pigs in an abattoir in Brentwood, Essex, led to two men being jailed. The defendants claimed ‘abuse was part of the culture of the slaughterhouse’. In a distressing video, a slaughterer can be seen pushing a lit cigarette onto the foreheads and snouts of three different pigs and forcing hot ash into one of the animals’ faces as the poor animal squirms to get away. One pig was beaten 30 times in just a minute.[1] Following this, how many mainstream newspapers ran the following headline: Ban pig slaughter in the UK? You guessed it – none.

We have been in this land of hypocrisy before, as noted in articles by Jonathan Freedland and Saeed Kamali Dehghan in the Guardian,[2] [3] and Paul Vallely in the Independent,[4] all in May 2014.

As journalist, broadcaster and author, Mehdi Hasan wrote in 2009:

“The British ‘debate’ about meat, animal cruelty and ritual slaughter has become a proxy for deeper fears.”[5]

Mehdi interviewed Joe Regenstein, professor of food science at Cornell University in the United States, who leads the university’s Kosher and Halal Food Initiative. He said,

“Many of those attacking religious slaughter have no clue as to what is happening. It is more of an Islamophobic issue, not an animal well-being issue.”

“Compared to modern, secular methods of slaughter, the traditional or Prophetic method might actually be equal or possibly superior” because the initial pain of the throat cut results “in the animal releasing large quantities of endorphins, putting it in a state of euphoria and numbness”. The cut thus serves as its own stun. The scientific evidence against halal slaughter, Regenstein said, “is extremely weak and has often been done poorly with an agenda driving a desired outcome”.

The “secular ways of slaughter”, as Regenstein points out, also have their downsides:

“If the public were to discover that animals were subject to a pre-slaughter intervention – like having their skull cracked open, [being] electrocuted, or put in a gas chamber – they might not really like that either.”

Mehdi also pointed to research led by Wilhelm Schulze of the University of Veterinary Medicine Hanover back in 1978, which showed that “the slaughter in the form of a ritual cut is, if carried out properly, painless in sheep and calves according to EEG [electroencephalography] recordings and the missing defensive actions [of the animals].” The German Federal Constitutional Court based its 2002 verdict permitting ritual slaughter on this study.

Religious slaughter is now banned in Denmark, but it is legal for humans to have sex with animals. At so-called ‘animal bordellos’ in the country, customers can pay to have sex with tied-up animals, including dogs and horses. Adverts offering the sexual ‘services’ of dogs also appear on Internet noticeboards. Strange, but sad(istic) and true.

Stunning – the myth of humane slaughter

Another red herring for the rising Islamophobia and Anti-Semitism in this country and across Europe is the debate about the stunning and non-stunning of an animal before slaughter.

The Muslim method of slaughtering animals is very similar to the Jewish Shechita technique, and involves an instant cut with an extremely sharp knife to sever four, or at least three, main arteries: the animal’s trachea (windpipe), oesophagus (gullet), and both jugular veins. This renders the animal insensible to pain and allows the blood to drain out making the meat cleaner. The knife should not be made visible to the animal nor raised during the cutting and other animals should not witness the slaughter. By contrast, the stunning of animals by electrocution, gassing or a bolt to the brain is considered completely cruel.

Many people recently signed a petition to ban non-stun meat. Yet, little did they realise that stunning of a cow, for example, involves every cow being shot with a bolt into their brain during what is believed to be humane conventional slaughter.

Animal Aid’s exposure of animal abuse in non-halal slaughterhouses was covered in an article published in The Mail on 31 August 2009. The descriptions are horrendous.

‘A cow’s head is clamped and a bolt shot in her brain to stun her. A man starts to hack off her left front hoof. Incredibly, the cow bends it then moves the other front leg away, over and over again. In another pen, a group of pigs wait to be stunned. The man uses electric tongs on a pig but instead of ensuring a shock of perhaps two or three seconds, he merely brushes the pig’s head. It staggers around, desperately trying to stand, so the man tongs another pig instead, and then another, leaving the first to recover before he goes back to it. A group of lambs are in the pen now, suckling at their mothers. A ewe is stunned as her youngster suckles; as the mother is dragged away, her throat slit in plain view, the lamb bleats, confused, and tries to suckle elsewhere. In another group, as the last one or two lambs are left, they try to escape. One scrambles into a bucket. The noise of their bleating is unbearable.’

“Much of what I observed is the usual slaughterhouse environment.”[6]

Shockingly, 99.6 per cent of pigs filmed at one abattoir were not stunned in accordance with guidelines. At another, out of 90 sheep killed in one session, only one per cent was killed within the 15 second guideline.

Temple Grandin, professor of animal sciences at Colorado State University and one of America’s leading experts on the humane treatment and slaughter of livestock sees no difference between stunned and non-stunned slaughter if both are conducted properly and professionally. When a religious slaughter is “done really right”, Grandin has said,

“the animal seemed to act like it didn’t even feel it – if I walked up to that animal and put my hand in its face I would have got a much bigger reaction than I observed from the cut, and that was something which really surprised me.”

Organic – high standards or not

How many members of the public, or indeed, Members of Parliament are actually aware of the greater abuse and longer-term suffering of animals before they reach the slaughterhouse? And how many have bothered to find out about the abuses that are occurring in non-religious slaughterhouses, including those labelled as organic?

A slaughterhouse considered to be one of the best – certified with the Gold Standard of the Organic industry – was filmed for 40 hours in 2010.[7] The abuse filmed included animals crammed into trucks; some chased out of vans by men wielding sticks; and pigs being kicked and beaten. Some footage shows a slaughterman who kicks, punches, knees and bashes a pig with steel-stunning tongs no fewer than 20 times. Another appears bored of stunning the animals with the electric tongs and reaches for a bolt gun instead – this is a different method of stunning the animals. He shoots a sheep in the head. The animal falls onto its side and struggles to get up – its legs frantically pawing at the air.

Between 2007 and 2010 the Meat Hygiene Service (MHS) prosecuted 33 abattoirs and slaughterers. It also ordered 166 slaughterhouses to tighten up their procedures on 455 separate occasions over the same period. This equates to three serious breaches every single week.

As Giles Fraser pointed out in an article in the Guardian,

“Most of our animals arrive at slaughterhouses traumatised after months of ill treatment. The idea that we ignore a whole life of misery and then get morally exercised by what happens in the last few moments of an animal’s life is pure moral bullshit.”[8]

Following the exposure of the catalogue of abuses to pigs, cows, lambs and many other animals in non-religious slaughterhouses, surely we should stop eating meat altogether and demand the end of slaughtering animals, not just a demand to end Halal?

Should we label stun and non-stun to help consumers choose?

The labelling of how an animal is slaughtered should not be discriminatory or selective based upon a perceived superiority of slaughter method or ignorance of the gruesome conventional processes. This will lead to further marginalisation and discrimination of two communities that are already feeling the impact of increased Islamophobia and Anti-Semitism in the UK and across Europe.

If we are to label sincerely for consumers, then why not tell them the whole truth and be completely transparent about the details of the animal’s life? For example, this animal was: crowded into filthy pens throughout its life; physically crippled by forced growing conditions; subject to a form of mechanised industrial slaughter that is nothing less than vomit-inducing.

The issue, my dear readers, is less about stunning and non-stunning, halal, kosher or non-religious. It is about having good robust standards in place with regulations of those standards. It is about providing the resources for the MHS to have enough staff that can monitor and observe the welfare of animals across all slaughterhouses. It is about introducing CCTV cameras in abattoirs as an extra assurance for animal welfare. So, let us be sensible and, rather than joining the hysteria of ending religious slaughter, let us demand that animal slaughter, wherever and however it takes place, should be done with utmost care for the animal.

To take urgent action to protect religious slaughter in the UK and EU, sign now at:

Moulana Yunus Dudhwala is currently the Chair of the Halal Monitoring Committee (HMC). He has been involved in certification of the Halal industry over the past ten years. He is also Head of Chaplaincy & Bereavement Services at Barts Health NHS Trust, located in an area with one of the most diverse populations in the country. He started providing spiritual care to patients on a voluntary basis in 1998, prior to his appointment as the first person from a minority faith to head a chaplaincy service in the NHS. In 2010, he was awarded the NHS employee of the year for his exemplary work as a Muslim chaplain. He has also served as a mosque Imam in Seven Kings and East Ham and also worked as a full-time Imam at the high security Belmarsh Prison. Originally from Blackburn and a graduate of Darul-Uloom, Bury and Al-Azhar University, Cairo, he is a regular speaker at Islamic events and mosques around the country.