How Big an Impact Does the Muslim Vote Have? 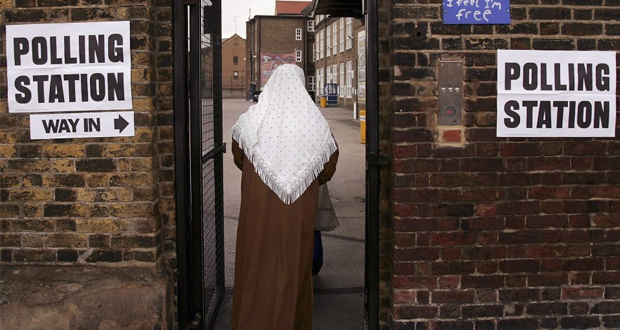 Scroll down for Muslim vote stats, how to register (deadline tonight at 11:59pm) and to watch our Islam21c BIG Discussion on the General Election 2017

With the deadline to register to vote hours away, we look again at the results of the last general election and the remarkable influence a unified strategy on part the Muslim community can achieve.

Sourced from the Office of National Statistics, MEND has collated a list of some of the UK Constituency marginal seats with a large Muslim electorate. These constitute ‘Defence Seats’ or the seats the respective party in that constituency will look at fighting hard to maintain. In the South Welsh coastal town of Gower, one would not expect to find a large Muslim community. However, this happens to be the Tories’ most marginal seat, having secured it with a 27 vote majority over Labour. The small Muslim electorate holds a potential 259 votes with an easy swing in favour of Labour.

It is a similar story in Derby North with a Conservative majority of 41 and 2,248 potential Muslim voters. Around 4,700 Muslim voters can register in Croydon Central and Bury against a few hundred-vote majority for the Tories in each. The list reveals 11 such constituencies though it is not exhaustive. In fact, the Henry-Jackson Society, more attempting to scaremonger than to encourage Muslim youth from political engagement reported that Muslims could potential decide 25% of seats in the run-up to the 2015 elections.[1] Although the HJS is not exactly known for intelligence or analysis, the unified impact of Muslims should not be underplayed, and with Conservative politicians pleading for the votes of smaller minorities,[2] one can only suppose a unified Muslim strategy will influence legislators out to win their vote.

Muslims have traditionally underplayed their potential influence on the UK Elections. But with many of the incumbent Tory Government’s policies ostracising Muslim communities, failing to address the rise in Islamophobia, targeting welfare and the vulnerable and failing to enforce fairness when it comes to taxing the richest and largest corporations, with the poorest suffering as a result, Muslims are looking to redraw and unite their strategy in bringing about positive change that benefits everyone, not just a select few.

The debate around voting from the perspective of Islamic Jurisprudence (Fiqh) has gone on for decades amongst the masses, but has been a relatively relaxed topic amongst scholarly circles since legal experts recognise that the ruling on voting in a particular election would depend on the context and place. Leading scholars and activists have argued that the very existence of an individual within a liberal democracy means their vote or abstention inevitably affects the result, with an abstention equivalent to a vote for the party that comes out on top.

Scholars and activists that have urged participation have used a number of reasons, from the essence of voting being permissible in the first place, to the Islamic obligation to minimise harm, and be involved in wider society. Shaikh Dr Haitham al-Haddad recently argued in an Islam21c BIG Discussion that voting on a similar premise potentially reaches the level of being an Islamic obligation,[3] and as such becomes an action worthy of reward if done with the intention to cause change within the scope of every eligible Muslim citizen in the UK.

Whether or not voting is permissible in theory is not therefore the question many Muslims should be focusing on, but instead we should be concerned with how to make the greatest positive impact. In order to inform such discussions, MEND has done a great service by collecting the following information, which we should all be keen to study and share with our friends and families. 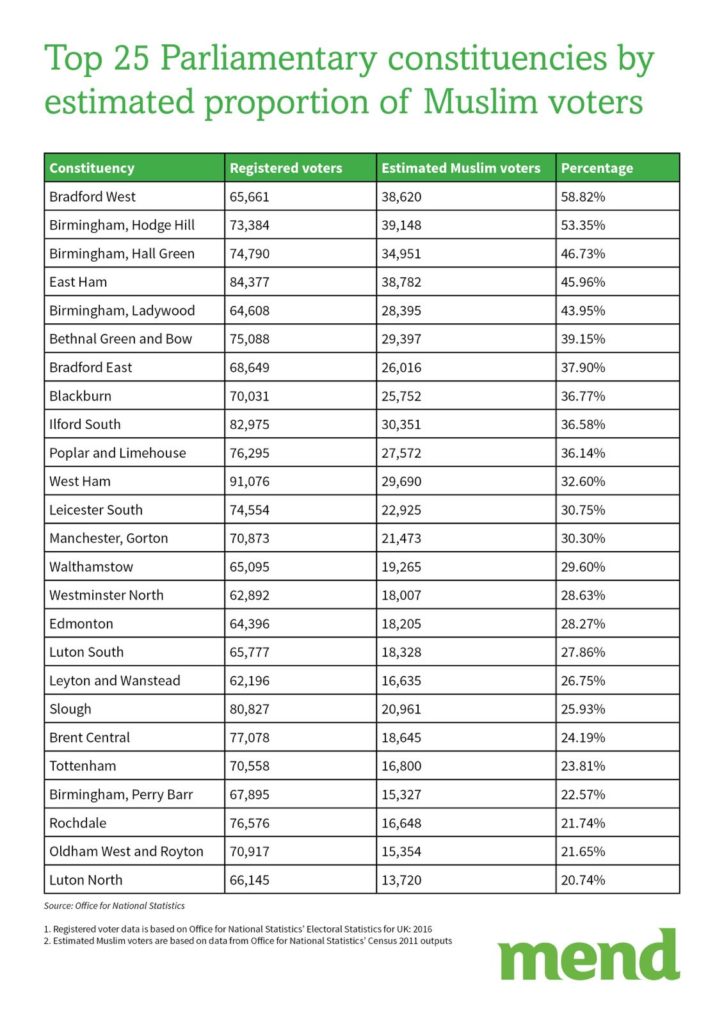 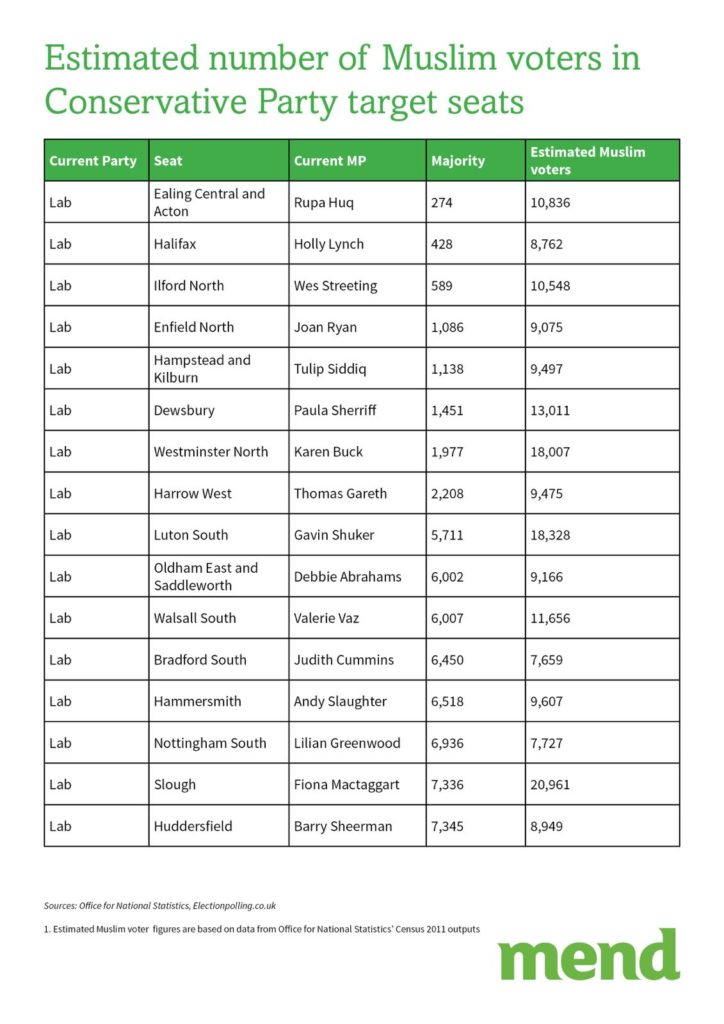 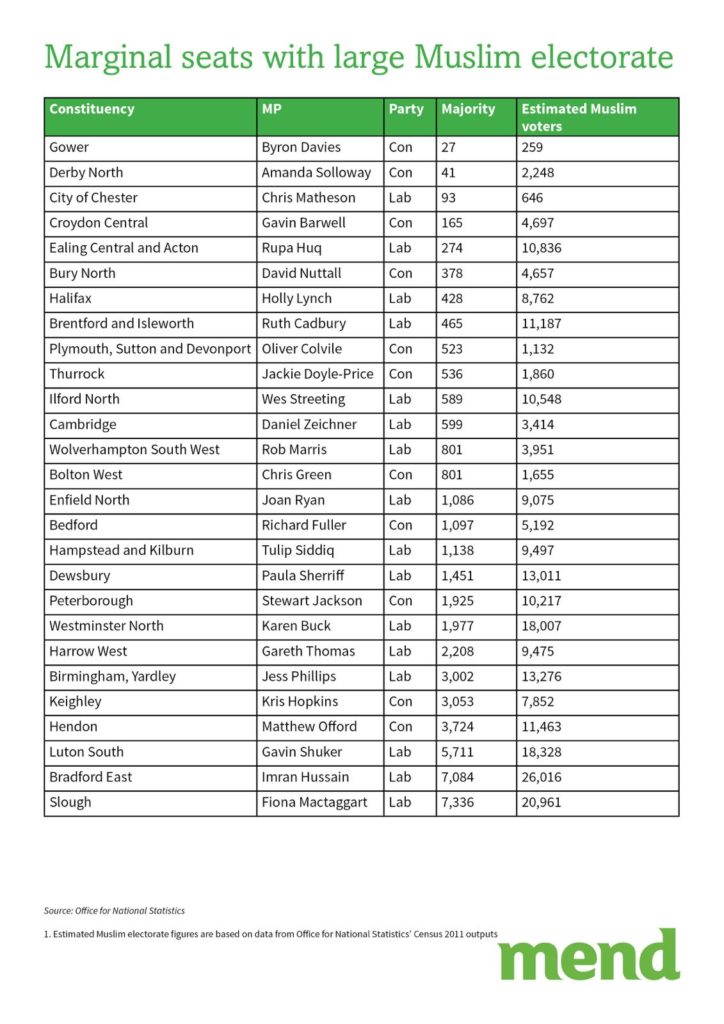 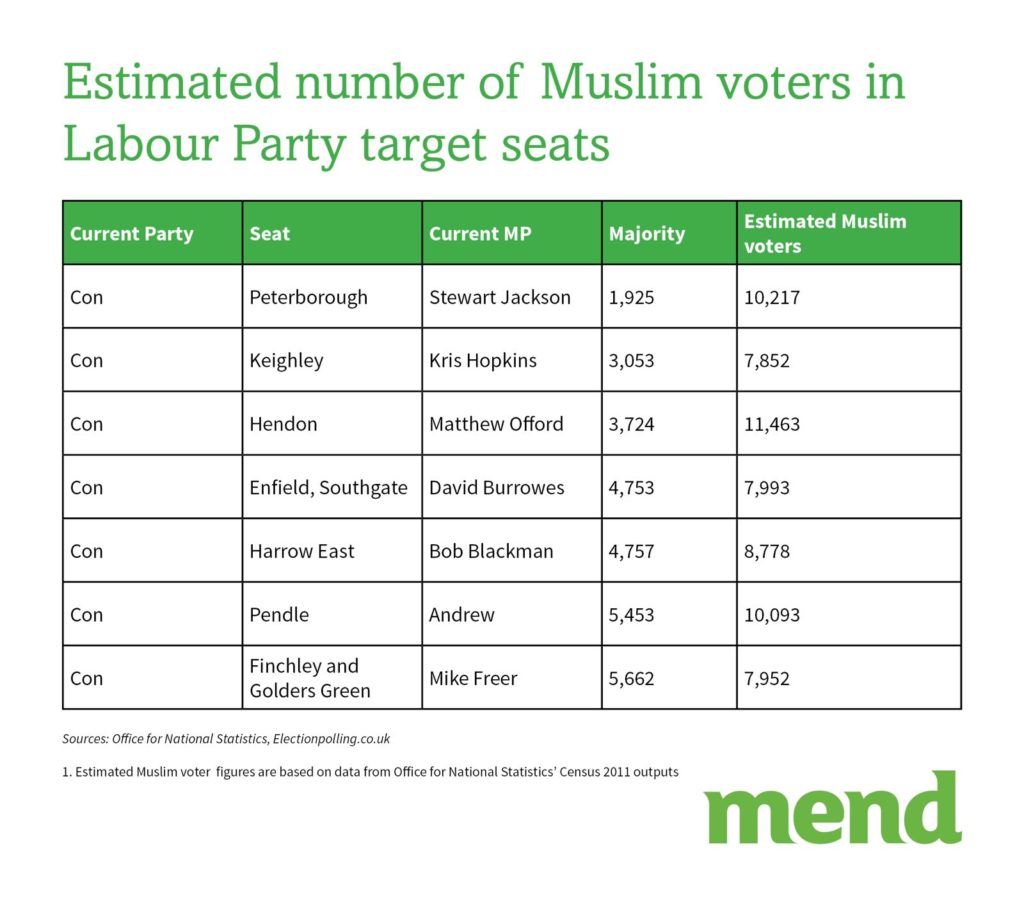 The deadline for registering to vote will be midnight on the 22nd of May and the General Election will take place on the 8th of June. This can be done online through the following link: