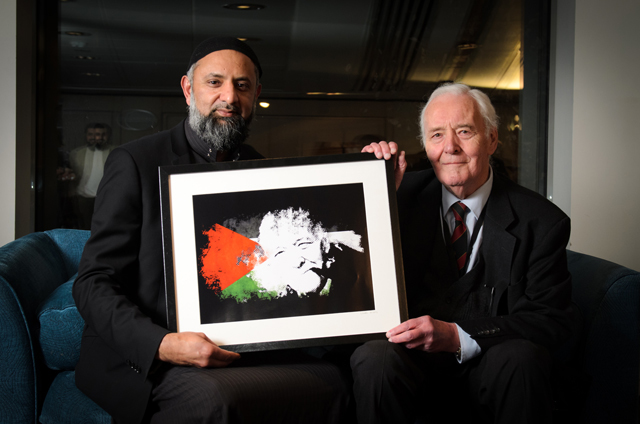 Yesterday, an honourable man who was arguably a contemporary Mut’im ibn ‘Adiy, died at the age of 88.  Tony Benn was one of the very few politicians that was well known for standing by his principles, standing up for the oppressed and occupied.  He was a vocal critic of Tony Blair’s war crimes and a President of the Stop the War Coalition, a campaigner for Palestinians’ rights and generally outspoken advocate for the oppressed in the world.  The following are some of his quotes and what people have said about him.

“But above all was his stance against the War in Afghanistan, Iraq and defending the plight of the Palestinians that he will be remembered by the ordinary person around the globe including UK. In 2009 he single handedly challenging the morally indefensible BBC decision not to broadcast the DEC appeal for Gaza.” Ismail Patel [2]

“He made an impassioned plea about Iraqi and foreign insurgents, saying “if you are invaded you have a right to self defence, and this idea that people in Iraq and Afghanistan who are resisting the invasion are militant Muslim extremists is a complete bloody lie”.”[3]

“What some refuse to forgive is not so much his divisiveness as his apostasy. He was a class traitor. He would not defend the privilege into which he was born or protect the establishment of which he was a part. It was precisely because he knew the rules that he would not play the game.”[4]

“He advocated for the weak against the strong, the poor against the rich and labour against capital. He believed that we were more effective as human beings when we worked together collectively than when we worked against each other as individuals. Such principles have long been threatened with extinction in British politics. Benn did a great deal to keep them alive. In the face of media onslaught and political marginalisation, that took courage. And, in so doing, he encouraged us.”[5]

“If I rescued a child from drowning, the press would no doubt headline the story, ‘Benn grabs child’.”[6]

“If you are invaded you have a right to self defence, and this idea that people in Iraq and Afghanistan who are resisting the invasion are militant Muslim extremists is a complete bloody lie.”[7]

“I’m very sceptical about the idea of Muslim extremism because the people in Iraq didn’t want to be occupied by foreign troops; and was that extreme? I mean, if Britain were invaded, we would resist the invasion. I was trained as a terrorist. When I was sixteen years old, we had what was called the Home Guard ready in case the Germans invaded and in 1941 I was taught to use a rifle with a bayonet and to throw bombs and fire machine guns and if the Germans had arrived I would have thrown a bomb. If I had seen a German officer having a meal in a restaurant with an English woman, I’d have thrown a bomb in; would I have been a terrorist or a freedom fighter? So I’m very sceptical of the idea of Muslim extremism.”

“I have a great deal of sympathy for the Muslim community because they represent an ancient religion and they come from countries which have had great civilisations; and because we were told we were fighting a war on terror, we were told that we had to make war on these people and then the Muslims here in Britain were vilified and described as terrorists and so I think that the West handled the matter quite wrongly.”

“The war has been presented to the public here as if it were a war on Islām; and the treatment of the Palestinians by the Israelis and the other examples – the war on Gaza, the wars on Lebanon – have all been presented as if they were all a part of this war on terror; they are not. And by design, the Muslims have been presented as being responsible for all the trouble and I don’t think that that is a correct analysis. I think the crisis in Israel is a crisis created by the Israeli government and those who support it.”

“The way the war is presented misleads the British public and misleads the Muslims as well because if you present it as a “war on terror,” then anyone who opposes you is then, by definition, a terrorist and actually, that’s not the real explanation. And this has given to many Muslims the feeling that their whole religion and way of life are under attack. We hear about British soldiers who have been killed, but you don’t hear the names of Afghans who have been killed or Iraqis who are killed or about their families or anything of that kind – they are just the enemy – they are terrorists. And the word terrorist dehumanises the people you are fighting. And that of course creates another sense of anger because why should it be that only when western people are killed does it matter and when Afghans are killed or Iraqis are killed, it doesn’t matter? Well why is that? Well, that’s because the way the war is being fought as a war against terror instead of a war of what it really is.”[8]

When Abu Jahl heard of Mut’im b. ‘Adiy’s offer of protection of the Prophet (sall Allāhu ‘alayhi wasallam), he asked him whether he had become a Muslim or not.  When he confirmed that he was not a Muslim, Abu Jahl then said, “In that case, we accept it.”  As is well known, in pre-Islamic Makkah, one had to have protection of one of the tribal leaders in order to stay there safely, as though it were a visa.  In Mut’im’s remaining a non-Muslim (just like with Abu Tālib’s) there is great wisdom from Allāh (subhānahu wa ta’ālā).  Likewise, in today’s politics, it is an unfortunate fact that a non-Muslim politician or activist can get away with saying things and fighting for things that Muslims are expediently silenced and prosecuted for, as has been highlighted in the recent arrest of Moazzam Begg, with one colleague tweeting:

#MoazzamBegg & I have a lot in common. Both been to Syria, both active on justice in the Middle East, but I’m not brown or a muslim #Racism.[9]

However, regardless of whomever Allāh (subhānahu wa ta’ālā) uses for furthering His Will of justice and truth, the moral responsibility (taklīf) still lies on our shoulders to be at the forefront for civic engagement to further truth and justice.  Everyday we are seeing more and more Muslims taking up this responsibility and campaigning in the public sphere, no matter how much the oppressors hate it or how severe their threats.  We ask for your du’ās and support to call upon Allāh (subhānahu wa ta’ālā) to give Islam21c and similar enterprises the strength and privilege to be at the forefront in leading the Muslims in the West towards the noble cause of making truth and justice supreme.

[1] Reported by Bukhāri and Muslim