I’m a non-binary Briton. And proud. 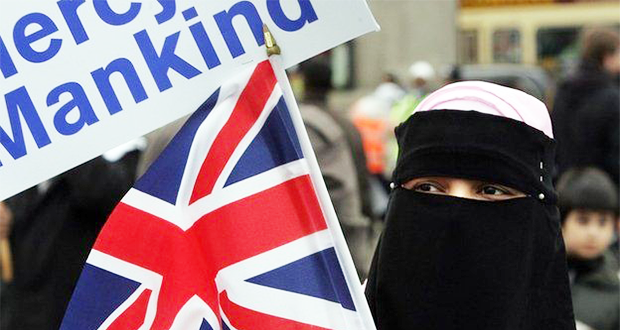 All this hype about Muslims not being British enough reminds me of Barack Obama’s 50% white heritage and the question that no one asks: Just how white do you have to be to not be black. The clear answer is you would need to be 100% white. We have become so used to this odd definition that a blue eyed, white woman with a perm was able to say she was black, stood for and was elected President of a branch of the National Association for the Advancement of Colored People in the USA.[1] Presumably people put her skin colour down to her being only 99% white and therefore she would still be black by the bizarrely accepted definition. In these days of rampant gender fluidity there is still no racial fluidity, only binary black and white, with the exclusivity falling all the way over to the side of the whites.

Equally so, there is no culture fluidity allowed. You can be foreign of course, or you can be 100% British. Otherwise, it is sad to say, but you are that disgusting new scourge on our once pure nation: “An Un-British person”.

I think the Telegraph is onto me already. They ran an Unbritishophobic opinion piece about Ofsted chief Michael Wilshaw’s neglecting to specify the particular strain of unbritishness of some illegal schools he’d found,[2] which the Telegraph’s anonymous author of uncertain gender insists must be mostly Muslims,[3] and is angrily demanding that they should be specified so it can have a proper go at us with “open and civil debate”; a standard we have not come to expect from the Telegraph.

The article was a desperate grasp for hatred:

“Sir Michael does not explain exactly which harmful ideas could be foisted on those children. Nor would Ofsted confirm publicly that many of these unlisted schools are operated by British Muslims, parents who do not want their children to be taught in the state school system. This refusal to state plain facts is deeply troubling.”

Clearly the author knows not all of the schools will be Muslim but it does not matter what the others are as long as the Muslims are specified or how else is it supposed to pull up on the hatred of Muslims for a decent unbritishophobic article?

It pointed out that there are already enough laws in place to deal with illegal schools, with stiff penalties for offenders. But, incredibly, there are no sufficient laws to protect this fragile nation from unbritishness. What it might involve was not known, what it might lead to was not known, but what the author seemed in no doubt about was that it must be an evil, unbritish scourge and therefore a scandal that children were being “hidden away” and indoctrinated with it. This gaping loophole it hopes will be filled by the upcoming “Counter Unbritishness Bill”.

The author and many like it clearly believe that Muslims are leading the opposition to binary Britishness more than any other minority. Indeed, any casual observer of bus CCTV or listener to LBC, a commercial radio station which specialises in selling unbritishophobia to the point they hired Katie Hopkins, cannot have missed how much venom other minorities have for Muslims and their non-binary tendencies. It is as though they believe they have successfully crept in under the xenophobic radar having submitted to being stripped of their culture and it is just the Muslims who are spoiling it for them.

The Telegraph opinion piece repeats some standard claims that “British Muslims are rejecting British values” and points out “British Muslims’ failure to integrate fully into our society” and, I am proud to say that, in this case it is true. We are the non-binaries and we will never fully integrate in the way some people want. We are the resisters to this new faux-British, anti-plural totalitarianism where totally harmless differences are banned.

But let us look at who is demanding it from us. Among others, the continual accusations that Muslims are unbritish are led by the Telegraph newspaper, the owners of which, the Barclay brothers, are a couple of very “different” sounding twins who live a very segregated life. Hidden away and so effectively veiled, they have managed to avoid even their own paparazzi getting a snap of them since 2000.[4] They have rejected integration with the British and their values so fully they built a castle on a private tax-avoiding Island on the French side of the channel. So adept at avoiding putting money into Britain by way of taxation, their famously un-impoverished Ritz hotel did not pay a penny of corporation tax into the British coffers for 17 years.[5] Not satisfied with not paying tax, they bought Littlewoods and promptly clawed back £472 million of tax with interest the previous owners had paid. They then sued HMRC for another billion pounds of compound interest. MP Nadine Dorries said of them: “They’re incredibly wealthy men who don’t pay British tax. I think it is just utterly appalling.”

It is easy to draw conclusions about the Barclay brothers’ respect for the British value of democracy by looking into their dealings with the Island of Sark which, inconveniently for them, governs their island refuge. The ancient system of governance which afforded a vote to each of the 40 feudal landowners meant the brothers would have only one vote in the Sark parliament. They bought up a third of Sark and increased their voting power.[6] Still without a majority and unhappy with the old system, they “championed” forcing a change to democracy in the European court. In 2008 when the first democratic elections were held the brothers promoted candidates who were favourable to their interests and warned islanders not to vote for other candidates.[7] A poster campaign on the island focused on employment. Immediately after the islanders democratically chose not to elect the Barclays candidates, ironically reducing their power to half what it was before they forced democracy onto the island, the Barclays closed down their recently bought businesses on Sark making a sixth of the population unemployed. A Barclays representative said “The people of Sark are reaping what they sowed the day before. They only have themselves to blame. They could have co-operated with Barclays Investment but they chose to obstruct it.”[8] Here is a short video covering the whole story.

Reading a petition set up to try and save Sark from the Barclay brothers it becomes apparent that the brothers are viewed as unwelcome immigrants who have invaded the once tranquil island and changed its character forever. [9] Unsatisfied with the law of the land they changed it. They took over businesses, took away jobs from the locals and they have brought in methods of doing things that negatively affected the locals. The difference between the Barclays on Sark and Muslims in the UK is that there is plenty of evidence to substantiate that the Barclays have actually done those things while the Muslims are only falsely accused of it, ironically, by the publication owned by the Barclays.

You can read and sign the petition here https://you.38degrees.org.uk/petitions/save-sark-from-the-barclay-brothers Share it with as many unbritishers as you can.

The Barclays are far from the only ones of the rich minority to reject the British people and refuse to live an integrated life with the rest of us. All of the rich live behind high walls in exclusive neighbourhoods. You will never sit next to one in the queue at A&E or share a ward with one after an operation. They reject mainstream education establishments and send their children to gender-segregated private schools with antiquated traditions at odds with modern British life. Even at university, where they are forced to mingle with some high achieving proles, they have created exclusive clubs where they can maintain their distance from mainstream Britain, taking part in bizarre rituals too gruesome to mention.

Today the queen of Britishness, The Queen, announced what new powers she has been hoodwinked into approving by the current government of aloof and extremely un-integrated hypocrites. They wish to continue chiselling away at our pluralism, at a once great British tradition where people were free to be different, to think differently, to do things how they liked, as long as it wasn’t hurting anyone else. We used to value differences as part of the pool from which we can develop new and improved ways of understanding the world, as a society. Now we lower people are in danger of not being allowed to be different while the rich still can. From now on, our elected masters want to decide for us what is acceptably different and what is forbidden.