Islamophobia is More Than Words 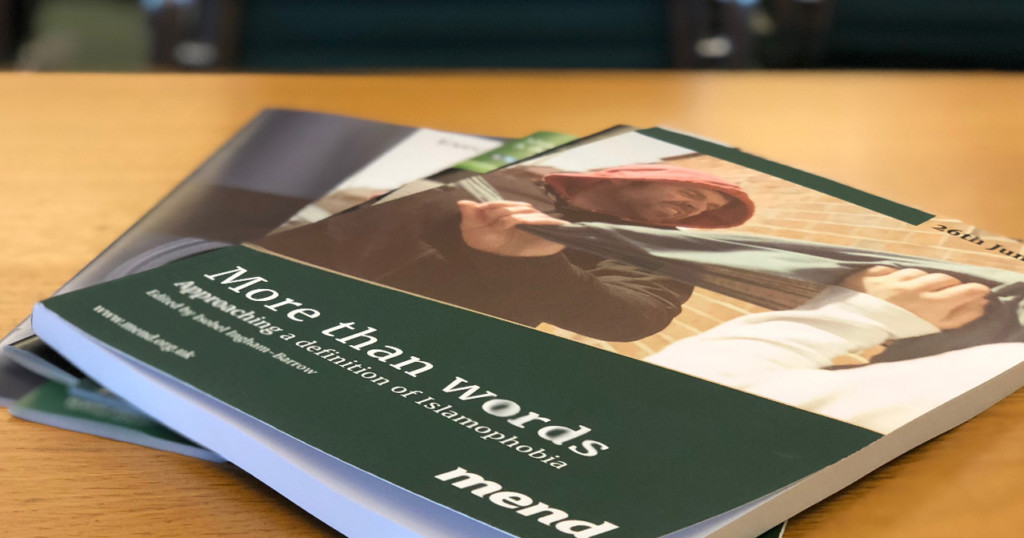 In September last year, Zaynab Hussein, a Muslim mother from Leicester, was taking her children to school when Paul Moore ran over her with his car.[1] Moore then proceeded to hit an eight-year-old girl in a hijab, before returning to the scene where Zaynab lay injured on the floor and running over her again.

Examples such as these are overt symptoms of Islamophobia in our society. However, there are also symptoms that are much harder to detect:

Taking all these different examples into account, the APPG (All-Party Parliamentary Group) for British Muslims recently launched an inquiry into a working definition of Islamophobia. In line with that inquiry, Muslim Engagement and Development (MEND) released their report “More than Words: Approaching a definition of Islamophobia” in an event in Parliament today. With contributions from leading academics and experts in their fields (such as Tariq Modood, Nazir Afzal, Todd Green, Lasse Thomassen, Aaron Winter, and Aurlien Mondon, to name but a few), the report is not intended to force a specific definition onto the APPG. However, it is important in its exploration of the roots and causes of Islamophobia, how and why it is fuelled, and its socio-political and personal consequences.

Islamophobia remains a contested term amongst political and academic debates. Some deny Islamophobia exists at all, and others resist attempts to define it for fear that it would be elevated to such a position that it cannot be ignored. However, a definition is important because it provides much-needed clarity in legislation that is intended to protect vulnerable minorities.

Once established, terms such as sexism, homophobia, racism and anti-Semitism became important tools to oppose and tackle the various discriminations and prejudices these labels embody.

It is now time to afford official recognition to a definition of Islamophobia.

While a full working definition can be found in the report itself, MEND’s definition of Islamophobia can be split into two parts:

According to MEND, the reasoning behind this definition is to secure Islamophobia, not just as hate crime and abuse, but also for it to be recognised in the ways that it works to exclude Muslims from all realms of civic life, whether that be through workplace discrimination, or through institutional Islamophobias that discourage Muslim voices from participating in democratic debates.

For some time, there has been considerable debate as to whether the term “Islamophobia” is appropriate, accurate or even counterproductive. This has led individuals and organisations to propose the use of other terms such as “anti-Muslim hatred”. However, MEND, along with the Runnymede Trust and various other experts in the field, argue unequivocally that the term “Islamophobia” is the most appropriate terminology.

Firstly, Islamophobia is a term that holds currency within public discourse and is well established within popular understanding. Many victims of Islamophobia may not have the technical vocabulary to fully explain their experiences. However, the long-standing existence and usage of “Islamophobia” means that the term has meaning for those whom it affects. Ultimately, if you want to help victims, you have to engage in a way that is meaningful for them. Therefore, “Islamophobia” is not a term that will be easily replaced within political, activist or victim vocabularies.

Secondly, differences between terms such as Islamophobia and “anti-Muslim hatred” reflect differences in focus and understanding of the phenomenon. Therefore, they produce different approaches and priorities in tackling it. If you don’t fully understand the problem, you are not going to solve it.

For example, while “anti-Muslim hatred” may be used to describe hate crime, verbal abuse, and harassment, it hides the damaging effects of anti-Muslim agendas within politics and media and, therefore ignores the dangers of discrimination and socio-political exclusion. In other words, “anti-Muslim hatred” covers the first part of MEND’s definition (hatred and hostility) but not the second part (discrimination and exclusion).

On the other hand, “Islamophobia” provides a broad understanding that explicitly identifies the phenomenon in all its forms and which, therefore, provides a useful tool in finding strategies for tackling it.

One of the main accusations against the word “Islamophobia” is that it is an attempt to stifle free speech and all criticism of religion. However, it has never historically, nor should it presently, be seen in this light. MEND’s report goes to great pains to highlight this point.

Islamophobia should not be understood as a protection against questioning or criticising religion. Nor should it be seen as an attempt to enforce restrictions on freedom of speech.

However, there is no absolute right to freedom of speech when it can harm others and society has always done what is necessary to protect individuals from abuse and violence. Indeed, under the Racial and Religious Hate Crime Act, 2006, Jews and Sikhs are protected against insulting, abusive of threatening words and behaviour. Therefore, including Islamophobia into this framework does not result in limiting freedom of speech further than what already has existing legal precedents.

The prospect of developing an official working definition of Islamophobia is hugely important in the challenge to tackling the hostilities, hatred, discrimination and exclusions that British Muslims face on a daily basis. Meanwhile, work such as MEND’s report highlights the importance of understanding all the different forms that Islamophobia takes and the mechanisms that drive it. It is only if we truly understand Islamophobia that we can effectively tackle it.

Isobel is Head of Policy & Research and MEND. She received her BA (Hons) in Arabic and Middle Eastern Studies with Persian, an MA in Middle East and Islamic Studies, and an MRes in Middle East Studies from the University of Exeter. Alongside her work with MEND, she lectures at the University of Exeter and is a postgraduate researcher in Area and Development Studies at the Institute of Arab and Islamic Studies. Her PhD research project is an exploration of masculinity within British Muslim communities.