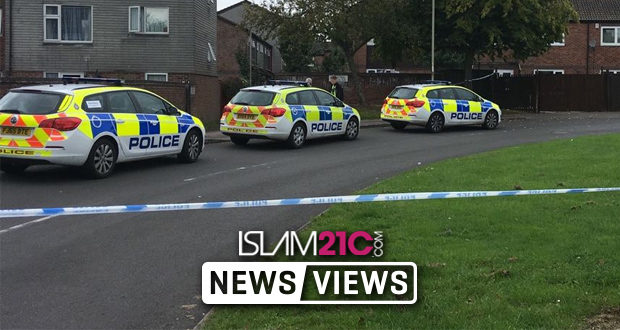 Paul Moore has appeared in court today for attempted murder of Somalian Muslim woman Zaynab Hussein, who was run over twice in an anti-Muslim attack also involving a 12-year-old Muslim schoolgirl.

In an attack that most people have not heard of—sadly for obvious reasons—47-year-old Zaynab Hussein was walking home in Leicester on the 20th September 2017 when she was run over twice in an anti-Muslim attack, breaking her leg and arm, and severely fracturing her spine and pelvis.

The same vehicle was alleged to have driven towards a 12-year-old Muslim girl nearby, but was unable to knock her down.

21-year-old Paul Moore, of Letchworth Road, Leicester admitted he was the driver but denies attempted murder.[1]

A jury in Nottingham Crown Court today heard prosecutor Jonathan Straw say that the defendant deliberately turned the car towards the victim—who is still bed-ridden months after the attack—and struck her from behind, after reversing and running her over again.

Straw said that Moore carried out the attack “purely because of the colour of her skin” and her “perceived Islamic faith”.

“An act of cold and calculated evil”

Mr Straw described the prosecution’s version of events as “an act of cold and calculated evil”. He told the court:[2]

“It veered off the road quite deliberately and smashed into the back of her. She was thrown up on to the bonnet and against the wall of a house. Her body fell and impacted forcefully on the ground.

She had been the victim, we say, of a targeted attack. He deliberately left the road and struck her from behind. He has then driven off but that was not the end of it.

He turned the car around and drove over her a second time while she lay prostrate and helpless on the ground. Carefully and deliberately in an act of cold and calculated evil, he aligned himself so the front and back wheels went over her.”

There were reportedly four other people in the car with him, who got out of the car and ran away after the first collision, before he was able to run over Ms Hussein for a second time. They gave evidence in court saying that Moore was driving fast and dangerously.

The prosecution said that Moore then deliberately drove the car at a 12-year-old Somalian schoolgirl a short time later, but alhamdulillāh only brushed the side of her sending her bag into the air, with no serious injuries.

“Blood coming from my head”

Ms Hussein described the horror of being struck in the attack.

He said “he was doing the country a favour”

The court heard that Moore was laughing and bragging after the attack. His half-brother, Lewis Welsh told the court that Moore told him that he had hit a woman, using a racist term to describe her. Welsh then went on to say,

“He said he was proud of himself and was doing the country a favour.”

As is sadly common with Muslim victims of attacks that would otherwise immediately be labelled “terrorism” by the press, much of the right wing media outlets have framed this as some kind of “revenge” for an incident in Parsons Green tube station where a crude explosive device failed to detonate.

The incident was claimed—like practically everything[3]—by a social media account said to be linked to ISIS, who the very same Islamophobic media outlets have tried tirelessly to paint as somehow relevant to the general British Muslim population, no doubt contributing to the worldview of the likes of Paul Moore, Darren Osborne,[4] Pavlo Lapshyn,[5] and many others like them.