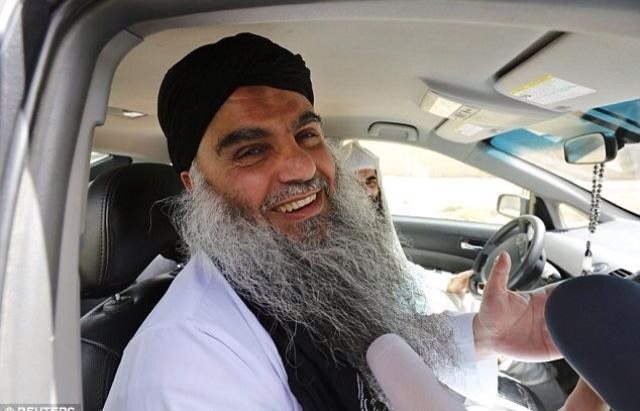 Hidden away in some dusty corner in government vaults in London there must be a well-thumbed dossier containing secret evidence which kept a Palestinian caged in Britain without charge or trial for more than a decade. Described by successive home secretaries as the most dangerous man in Britain, it may seem surprising to many that he was never charged in the UK with a single criminal offence.

Perhaps it is even more surprising that when justice was finally delivered to Abu Qatada it was done so in the very country from which he’d fled because of its atrocious human rights record. However, it was indeed from a Jordanian court that Bethlehem-born Omar Mahmoud Othman, to give him his full name, walked free after being cleared of terror charges. It was his second acquittal this year, prompting questions over the veracity of “secret evidence” held on him by the British authorities.

Abu Qatada was exonerated after the state security court in the capital Amman ruled that the charges against him, that he provided spiritual and material support for a terror attack planned during New Year celebrations in Jordan in 2000, lacked sufficient evidence for a conviction.

He fled originally to Britain in 1993 with his family to escape torture and persecution in Jordan, choosing the UK as a safe haven in the belief that he would be protected and shielded by a country whose human rights reputation was a beacon to the world. Sadly, that all seemed to change with the arrival of Tony Blair and his New Labour regime when he swept in through the doors of Number Ten with the lyrics of “Things Can Only Get Better” ringing in our ears.

After several years of conflict, dodgy dossiers and the War on Terror, those from the Arab world who had sought protection from tyrannical regimes found themselves being locked up in Britain under the pretext of “national security”. Among them was Abu Qatada, who became the target of an unprecedented hate fest and vigilante-style vilification from the Fleet Street media.

Never has the moniker “Street of Shame” been so applicable, as various journalists wrote columns of hysterical nonsense about a man about whom they knew nothing; they were joined by British parliamentarians from all parties, so-called anti-terror experts and mouthpieces for right-wing think tanks.

At best this gaggle were lied to but were happy to regurgitate the lies without question; at worst they were themselves the liars and deliberately set out to deceive an unsuspecting public, but which it was we may never know. The truth is that they knew little or nothing about Abu Qatada in terms of actual facts yet this incoherent rabble were perfectly happy to wave a dodgy dossier (how many are there?) at the public, citing “secret evidence”.

Former Home Secretary David Blunkett once described him as the most significant extremist Islamic preacher in Britain while irresponsible journalists called him Al-Qaida’s spiritual leader in Europe, without supplying any factual details at all. Neither they nor Blunkett offered any proof to support their outrageous and defamatory statements.

Abu Qatada insists that he never even met Al-Qaida’s leader, Osama Bin Laden, which is slightly odd for someone accused of running his European operations. Despite this, the Special Immigration Appeals Commission (SIAC) said that he had “long-established connections with Osama Bin Laden and Al-Qaida” and that he “held sway over extremists”.

“He has given advice to many terrorist groups and individuals, whether formerly a spiritual adviser to them or not,” the Commission’s lawyers told one hearing. “His reach and the depth of his influence in that respect is formidable, even incalculable.”

Well where was the proof? Where was the evidence? We couldn’t see it and, more importantly, Abu Qatada and his defence team were also denied any opportunity to look at what was declared to be “secret evidence”.

I now challenge the current British Government to make public this evidence against Abu Qatada. Maybe we will then be able to find out what was inside the file for Theresa May to call him “a dangerous man”.

To be fair to her they may not be her own words; she is not the first government minister to line up and say the same without producing one shred of evidence; however, if that is the case then it would be interesting to find out who has been spoon-feeding untruths and briefing a long line of Home Office ministers. Surely ministers wouldn’t stand up in the House of Commons and deliberately mislead the public? Would they?

It’s certainly safe to say that we can ignore the special intelligence briefings against Abu Qatada as these were concocted by the same sort of craven liars who tried to convince us all that Saddam was 45 minutes away from nuking us all to oblivion.

And it’s interesting to note that one of the most vocal critics of the cleric is the now discredited Spanish judge Baltasar Garzón, who went as far as to describe Abu Qatada as the spiritual leader of Al-Qaida in Europe knowing that no one would dare question the word of one of Spain’s most eminent judges at the time. Sadly not a single British Government minister, journalist or analyst has been honest enough to admit that they’ve been conned.

When justice was finally delivered it was done by a Jordanian judge, Ahmad Qatarneh, who this week issued a written, unanimous verdict enabling Abu Qatada to walk out of court a free man.

CAGE, an advocacy group that has campaigned for the rights of Abu Qatada and others throughout the War on Terror, is now calling for a public inquiry into how “our legal system was subverted and an innocent man held without charge for one of the longest periods in modern European history.”

I agree. The least we can do now is to hold a full and comprehensive inquiry and find out who lied to who. The British public has been duped and it is possible that successive Home Secretaries have also been hoodwinked. Surely it is important to find out the source of the lies and this can only be achieved through total disclosure and transparency.

If someone in the intelligence services or a senior civil servant in Whitehall has been treating government ministers like a group of monkeys then we need to know who the organ-grinder is. It should also force the whole issue of “secret evidence” to be re-examined and evaluated now that Abu Qatada has been exonerated.

This article was originally posted on Cage UK – read here