10 deeds for 10 days for Moazzam Begg 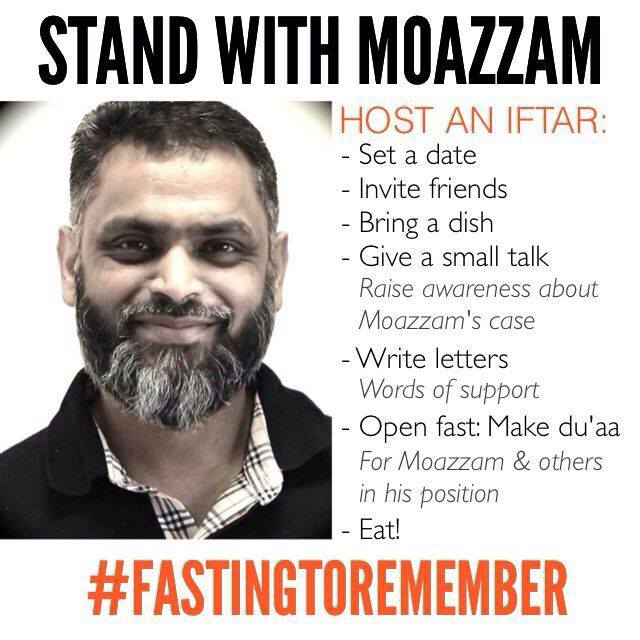 The first 10 days of Dhul Hijjah are now upon us, these days are almost coinciding with the 10 day countdown until Moazzam Begg’s  trial. He is due to stand trial at the Old Bailey on 6 October 2014, CAGE have put together this practical day by day guide in order to make the most of these blessed 10 days and in these crucial days in the run up to the trial.

We are asked to believe without seeing…spend without receiving and exert our energies for the sake of others.

Allah (SWT) says that: “Never shall you attain to righteousness unless you spend from what you love” (3:92)

And the Prophet (SAW) taught us that true belief lies in caring for your brothers and sisters: “None of you truly believes until he loves for his brother what he loves for himself.”

Ours is not a religion of isolation. We are told to pray in congregation so we come together before Allah and it helps us to get to know our communities. We are encouraged to feed the fasting and thus gain the rewards of their labour without them losing out. In fact, the companions feared that the Prophet (SAW) spoke so much of the rights of the neighbours that Allah would make them inheritors in their wealth.

One of the best examples of the social side of Islam is the Hajj, and the days of Dhul Hijjah are upon us. AsDhul Hijjah is one of the four sacred months, it is a great opportunity to reap Allah’s mercy.

The Messenger of Allah (SAW), said: “There are no deeds as excellent as those done in these ten days.” They (the companions listening) said, “Not even Jihad?” He, peace be upon him, said, “No, not even Jihad except a man who goes forth endangering his life and wealth and does not return with anything.” [Bukhari]

So for those of us who don’t have the good fortune of performing the Hajj this year we will need to consider what we can do.

So here’s a thought:

Our brother Moazzam Begg was arrested on the 25th of February at his house in Birmingham in regards to several trips he had made to Syria. Moazzam is no stranger to the authorities and after being released from Guantanamo Bay in 2005, cleared of all charges, he has worked tirelessly to help Muslims and non-Muslims around the world. His court appearance is on the 6th of October and now it’s our turn to help him.

After having learnt that we can draw nearness to Allah by helping our brethren in Islam and realising the great value of deeds in the first ten days of Dhul Hijjah, here’s a number of activities we can perform to help Moazzam and ourselves.

Day One: The Hujjaj

Change your Facebook and Twitter profile to an image of Moazzam Begg. Try to keep this image until the conclusion of his trial as a show of solidarity with him.

Write to Moazzam to show him solidarity. A short encouraging letter or Eid card can make a huge difference to a prisoner’s spirit and morale. You can write to him at:

Make a donation to CAGE, the unique advocacy organisation that Moazzam used to work for and that is at the heart of the struggle for Muslim civil liberties in the UK and abroad. There is a concerted effort to shut down CAGE as a result of which CAGE’s bank accounts were even closed. Make a donation where you know your hard earned money will make a real change to people’s lives. To donate get in touch with CAGE at [email protected] or call on 0207 377 6700.

Organise an iftar where you can tell people about Moazzam’s case and ask everyone to make dua for him at the time of breaking their fast. Allah’s Messenger (SAW) declared, “Three men whose dua is never rejected (by Allah) are: when a fasting person breaks fast (in another narration, the fasting person until he breaks his fast), the just ruler and the one who is oppressed.”

Perform Tahajjud and make dua for Moazzam during it.

Abu Hurairah (RA) narrated that Allah’s Messenger (SAW) said: “In the last third of every night our Rabb (Cherisher and Sustainer) (Allah (SWT)) descends to the lowermost heaven and says; “Who is calling Me, so that I may answer him? Who is asking Me so that may I grant him? Who is seeking forgiveness from Me so that I may forgive him?.”‘ (Bukhari)

Get your children or children of a relative or friend to make an Eid card to send to Moazzam in prison.

Make a donation to Helping Households Under Great Stress, HHUGS is the only registered charity providing emotional, financial and practical support to the families of individuals caught up in the War on Terror, including Moazzam’s family. In doing so, it fulfils an obligation that we are all responsible for. Donate to HHUGS to share in the reward.

Day Nine: The Day of Arafat

Fast the fast of Arafat and when breaking your fast, make dua for Moazzam.

It was narrated from Abu Qataadah (may Allah be pleased with him) that the Messenger of Allah (peace and blessings of Allah be upon him) was asked about fasting on the day of ‘Arafah and he said: “It expiates for the past and coming years.” Narrated by Muslim (1162). According to another report: “I ask Allah that it may expiate for (the sins of) the year that comes before it and the year that comes after it.”

Day Ten: The Day of Eid

When you have prayed the prayer of Eid, and the Imam is making dua for the Ummah, take a moment to extend your dua for Moazzam and his family. Ask the Imam to make an announcement for everyone to remember Moazzam in their dua too as his trial begins the following week.

By joining us in performing the above deeds, you will already be drawing nearer to Allah and by making duafor your brother too, you earn the dua of the Angels.

Abu Darda that the Prophet (sallallahu alaihi wa-sallam) said, “The Dua of a person for his Muslim brother in his absence will be answered. At his head there is an angel, and every time he prays for him for something good, the angel who has been appointed to be with him, says, ‘Ameen, may you have likewise.’”

The Messenger of Allah, upon whom be peace, said: “There are no other days that are as great as these in the sight of Allah, the Most Sublime. Nor are there any deeds more beloved to Allah then those that are done in these ten days. So increase in tahlil (to say la illaha illallah), takbir (to say allahu akbar) and tahmid (to say alhumdulillah).” [Reported by at-Tabarani in al-Mu’jum al-Kabir]

Ibn Hajar says in Fath al-Bari: “The most apparent reason for the ten days of Dhul-Hijjah being distinguished in excellence is due to the assembly of the greatest acts of worship in this period, i.e. salawat (prayers), siyam (fasting), sadaqah (charity) and the Hajj (pilgrimage). In no other periods do these great deeds combine.”

The day of Arafat is the essence and pinnacle of Hajj. On this great and momentous day, millions of worshippers gather together on one plain, from every corner of the world, with only one purpose in mind – to respond to the call of their Creator. During this auspicious day, Allah does not refuse the requests of His worshippers.

“The Prophet, upon whom be peace, would fast on the ninth of Dhul-Hijjah, the day of Ashura.

This article was originally posted by Cage UK – read here