Liberal and Progressive Left? Not really 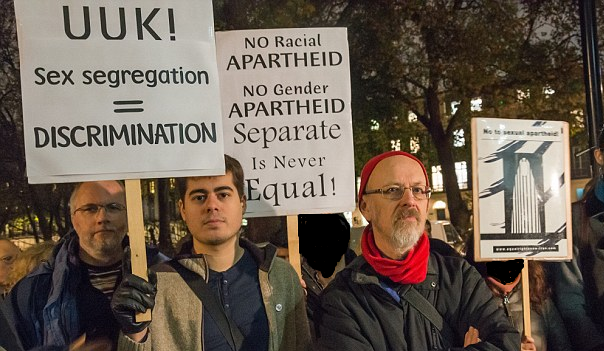 For quite some time I have been able to observe that people on the political left strongly support the rights of Palestinians, indeed they are anti-war, anti violence, anti oppression and pro freedom – or so I used to think. Indeed I have travelled thousands of miles on convoys to Gaza with leftist non Muslims who are passionate about wanting to help the occupied and oppressed be it Iraq, Afghanistan or Palestine all predominantly Muslim countries.

On any long journey it does however become clear that there are many areas of difference between Muslim values and the left and I do wonder what freedom in the Middle East would look like to the leftists? It is clear that the left although they claim they would defend our rights as Muslims, are often inherently Islamophobic under the surface and this came starkly into light for me personally when a well known Marxist blogger who is a staunch supporter of Palestinians wrote very derogatory comments on his blog about my wearing of the niqab, whilst at the same time telling me that he would fight for my right to wear it. It is never the less very degrading to be told that because I choose to wear niqab that I am a self oppressor. Such anti niqab sentiment is to be expected more usually from the far right than the left.

After the Mavi Marmara flotilla, on which I was a passenger, I read a report by the Rand Institute. The summary of their investigation into the flotilla showed clearly they were shocked that leftists and Muslims could happily share a common cause and unite and they saw this as something dangerous and threatening to Israel. This feeling of being threatened is a puzzle to all of us since Israel, it is claimed, has the world’s 4th strongest army and of course Israel uses it’s military with impunity against Palestinians and even against peace activists. The Rand report concluded that the way forward for Israel was to divide and shatter the coherency of the pro Palestine movement.

On the right of the political spectrum at one level there are the pro Israel and Neo Conservative groups, also on the right are groups such as the E.D.L. for example, who’s members are usually racist by nature, both groups however are Islamophobic and as such their causes unite and their agendas cross over. Groups such as the very wrongly or ironically named Students Rights who seek to disrupt and harass Muslim speakers on University Campuses and at events in the U.K. have so far refused to declare where their funding comes from, they also absolutely do not represent any official Student body. As pro Palestine groups and their campaigns become larger and more successful in Universities and in general in the U.K. there is an agenda by the pro Israel lobbies and think tanks to silence those who speak out against Israeli atrocities. Clearly this can’t be done directly as criticism of Israel is allowed under our free speech laws. It must be said, however, that pro Israel groups wish to conflate and label criticism of Israel as anti Semitism under the European working definition of anti Semitism, a document that has never been accepted, adopted or used. Clearly more complicated methods of diverting the solidarity movement have had to be found.

The pro Israel/Neo Conservative groups together with the E.D.L., Casuals United etc, have had some success in inhibiting free speech for Muslims. Although Student rights is not funded or endorsed by students themselves, it has successfully managed to promote the line that some of our scholars are promoting hatred of homosexuality and they have sought to capitalise by misrepresentation on the segregation of males and females at events attended by Muslims, using words such as “enforced segregation” to inflame sentiments.

The issue of choice is important here. It seems that the pro Israel – Neo Conservative right have managed to suck some on the left into believing that Muslim women need saving from gender segregation. Whilst openly proclaiming to be liberal, inclusive and progressive some on the left are now seemingly outraged at what they are told is forced subjugation and discrimination of women. The report by Universities UK said that if side by side segregation occurred at events then this would be in line with the equal opportunities act as it did not offer preferential treatment to either gender. Despite this being a very minor element of the report, it has been jumped on by the media.

Ex Muslim – feminist Maryam Namazie has started a petition to have the recommendations of the report by the Universities U.K. organisation overturned. Has she consulted Muslim women and men on this or does she speak only for herself, non Muslims and a few Islamophobes? Certainly the petition has been heavily circulated by Raheem Kassam, a well known pro Israel/Neo Conservative who is involved in Student Rights and the blatantly Islamophobic Henry Jackson Society both on his website Trending Central and through his twitter account.

The issue even reached Channel 4 news and it was no surprise to me to see the Quilliam foundation researcher Erin Marie Saltman giving the following opinion:-

“There is a fear of offending the Muslim community but there are a lot of modern Muslims that would never allow gender segregation.”

Perhaps Ms Saltman could explain to the public what a “modern” Muslim is? The Quilliam foundation claim to promote progressive Islamic values but what is progressive about forcing Muslim men and women to sit together if they do not wish to? Presumably many “progressive” or “modern” people send their children to boys or girls only schools as do atheists, Jews, and Muslims. Is anybody offended by girls or boys only schools?

One has to wonder about the mainstream medias approach to their broadcasts on the gender segregation issue. Is it just laziness by the media that the same people keep being invited to speak and debate issues on Islam and Muslims? I found two interviews so far where the bias of the interviewer was so obviously against the notion of gender segregation that they hardly allowed the person brought in to explain the Islamic viewpoint and rudely shouted them down when they did try to speak. The media bias is clear since they have invited Maryam Namazie an ex Muslim who therefore cannot speak for Muslims and Yasmine AliBhai Brown who belongs to a very obscure minority sect of Islam that is regarded heretical by the majority of scholars, neither can with any honesty either claim to have knowledge about Islam and neither of them can claim to be anything other than totally hostile towards mainstream Sunni Islam. It is our own fault that we as Muslims have for years failed to engage politically and so when an attack comes against Muslims from such as Student Rights we are often totally unable to field people who are media savvy enough to represent us, it is noteworthy that the big attacks this year have been on issues that involve women i.e. the niqab and the perception that women are disadvantaged by segregated seating.

It is clear that the far right have found issues where they feel they can co-opt the left against the Muslims and divide the pro Palestine movement. What really puzzles me is how the leftists who claim to be both liberal and progressive seek to control how Muslims choose to conduct their events. Of course likewise those who claim they believe in the right to freedom of speech and expression such as the Islamophobia award winning pro Israel blog Harry’s place have long had their hypocritical agenda to stifle Muslim speech and expression exposed. So the question now has to be can the liberal and progressive left accept that Muslims have certain values on homosexuality, gender segregation and niqab which are inherent to our beliefs or do they wish to join the far right in trying to force their mostly atheistic values on Muslims?