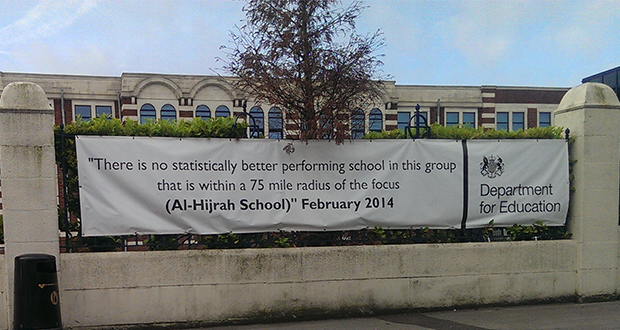 It is ironic that the BBC perpetually calls on controversial figures with reputations for causing discord amongst the British Muslim community to discuss issues that affect traditional Islam and orthodox Muslims. The irony of the statement “it is the vocal minorities that are dominating the discourse” on Newsnight could not be lost since it is figures like the one invited who are the vocal minority given an unprecedented amount of media space. [1]

Watching this particular guest espouse his aggressive rhetoric on national television shouldn’t surprise us.  Little has changed since he came into prominence in 2008. In spite of his constant renunciation of his previous ways, it is clear from the manner in which he recently felt the need to constantly interrupt his fellow Newsnight Guest Ibrahim Hewitt that he is still an attention seeker who wishes to be heard by shouting the loudest. The way that he demands instant answers which require insightful explanation is reminiscent of that of his apparent foe, Anjem Choudary. Those who know him will recognise the similar tactics of interrupting and shouting over fellow guests. He has indeed taken a leaf out of Choudary’s book; after all, they’re both cut from the same cloth. They both live in a world of black and white.

It was interesting how this guest felt he needed to question Ibrahim Hewitt’s personal beliefs on the penal code of the Shariah (which isn’t as black and white as he wishes to make the unassuming British population believe) rather than discuss the subject at hand, ‘The Trojan Hoax’. Keeping the Trojan Hoax alive is merely opportunism from some within the government. We cannot help but examine the absurd nature of the “plot”. An ‘anonymous letter’ found by the wayside outlining the desire to increase religious influence in public schools is submitted to the local council in Birmingham. This consequently instigates four separate government inspections, one of which was led by a counter-terrorism officer of a school in a deprived inner city area of Birmingham. A school that has a near-complete intake of ethnic minority students who come from an extremely deprived area of the UK. A school which has successfully managed to overturn a culture of academic failure, achieving results well above the national average. A school that was only recently identified as a model example by the education authorities. The Education Minister, Michael Gove’s decision to turn this story into a national concern along the lines of tackling extremism in schools has been nothing short of sensationalism and a disingenuous attempt to create distrust between the Muslims and the wider society.

Gove has been accused of maliciously using the “Trojan Horse” schools row to push an ideological anti-Islamic agenda within the government. Whitehall sources revealed that behind the scenes the Education Secretary has been pressing David Cameron for months to widen the government’s definition of “Muslim extremism”.  These sources have suggested that he has used allegations of a plot to “take over” a number of schools in Birmingham to press the Prime Minister to agree tough new measures to secularise schools in Muslim areas. One said: “Michael Gove’s views are so incredibly black and white. It’s either his way or no way. He seems to think that anybody who strictly follows Islam is not really integrated. And he thinks anybody who holds conservative Muslim views is a bit of an extremist. He has been using Birmingham to pursue an ideological agenda that he’s had for many years.” [2] This is where the Quilliam Foundation enter the fray. These people have long claimed to be the commanding voice on defining ‘Islamic Extremism’.  Losing its funding from the Home Office, Quilliam have now been funded to the cool tune of £120,000 by Gove’s Department for Education (DfE) according to the Newsnight report  on the 4th June 2014. On the topic of Trojan Horses, it is interesting to note that a Quilliam Foundation member, Ishtiaq Hussain, left his post there to work for the Department for Education, a year or so before the latter started funding the former [3].  It may also be worthy of note that Hussain is one of the lead investigators in the Trojan Hoax plot, on behalf of the DfE [4].

Mr Gove’s stance is understood to have caused unease among cabinet colleagues including the Home Secretary Theresa May and the Communities Secretary Eric Pickles. In particular both were angry at his decision to appoint Peter Clarke, the former head of Scotland Yard’s counter-terrorism department, to investigate the Trojan Horse claims using ministerial statutory powers.  Ms May and Mr Gove are said to have had a number of “spats” in cabinet committee meetings. One source said that part of the dispute between Ms May and Mr Gove was personal – in part fuelled by leadership ambitions. “They are trying to outwit each other and have had some real spats in the past within Cabinet, where Michael has just ripped into Theresa and has tried to set her up to look stupid.” [5]

Should we be surprised with Mr Gove? After all, he is quite explicit in his allegiances, being signatory of  the “Statement of Principles” for the right wing neoconservative think tank, the Henry Jackson Society. [3] ”The Henry Jackson Society is a non-profit and non-partisan organisation that seeks to promote the following principles: that liberal democracy should be spread across the world; that as the world’s most powerful democracies, the United States and the European Union – under British leadership – must shape the world more actively by intervention and example; that such leadership requires political will, a commitment to universal human rights and the maintenance of a strong military with global expeditionary reach; and that too few of our leaders in Britain and the rest of Europe today are ready to play a role in the world that matches our strength and responsibilities” [6]

A cursory look at his book ‘Celsius 7/7’ should give us an insight of the type of individual Gove is. In his book, he writes about the threat of “fundamentalist terror” worldwide and how it is the fault of “Western appeasement”. The book itself was extremely controversial and heavily criticised. The Guardian accused it of promoting a “jejune Cowboys-and-Indians world-view”.[7] William Dalrymple was particularly vocal saying that

“Gove’s book is a confused epic of simplistic incomprehension, riddled with more factual errors and misconceptions than any other text I have come across in two decades of reviewing books on this subject”. [8]

What is even more interesting is that one of the chapters in Gove’s book is entitled ‘The Trojan Horse’, a chapter in which he highlights the “failure to scrutinise, monitor or check the actions, funding and operation of those committed to spreading the Islamist word within Britain.” Could this whole episode of questioning ‘extremism in schools’ be something inspired by Gove’s writings, in order to legitimise the harassment of Muslim schools? This should be the first sign into the entire hoax. The second and most obvious sign that the document was a forgery was its use of the phrase “Trojan Horse” to summarise the strategy which it claimed to be proposing. The term is fairly common in anti-Muslim writings but not at all likely to be used by Muslims, least of all by any who hold the kinds of view which the document caricatures. Thus, for example, Anders Behring Breivik described Islam as a Trojan Horse in a passage in which he quoted with approval by an author who had written that “in Europe, the Muslim Brotherhood discovered a unique opportunity: Democracy. The democratic system leaves room for freedom of religion and freedom of speech, and finances religious communities and religious organisations. This has been utilised by the Muslim Brotherhood to infiltrate the Muslim communities, recruit members and build the Islamist networks that have become so visible lately.” [9]

On the issue of the subsequent school inspections which were performed in a sinister fashion, Lee Donaghy, the assistant principal of Park View School said “Their selective search and use of evidence was clear to us. They picked on small things and things that would fit a narrative, and ignored things that would go against that narrative.” [10] In a letter to the Guardian newspaper, Sir Tim Brighouse, a former chief education officer in Birmingham, stated that he was extremely unhappy at the way Ofsted has conducted inspections into schools allegedly infiltrated by conservative Muslims and that it is at risk of compromising political independence by producing “tarnished reports”. Describing the mass inspection as “a landmark in the history of education in these islands”, Brighouse and the other signatories argue:

“First-hand accounts of the Ofsted inspections that have emerged are disturbing. They suggest that inspectors were poorly prepared and had an agenda that calls into question Ofsted’s claim to be objective and professional in its appraisal of standards in schools serving predominantly Muslim pupils… It is beyond belief that schools which were judged less than a year ago to be outstanding are now widely reported as ‘inadequate’, despite having the same curriculum, the same students, the same leadership team and the same governing body. This is uncharted territory, with Ofsted being guided by an ideology at odds with the traditional British values which schools are meant to espouse, particularly fairness, justice and respect for others.”

On Tuesday, further evidence also emerged of abrupt shifts in Ofsted’s inspection results with a leaked inspection report showing that a second secondary school in the city that had been previously rated as good or outstanding in November 2013 is expected to be downgraded to inadequate when its new report is published this week.[11]

To suggest that cabinet ministers are in collusion with Ofsted isn’t a farfetched assumption. If we examine this further, it does seem that Ofsted have been instructed to shift their goal posts. Take for example the manner in which Ofsted inspectors conducted their investigations in all of the implicated schools, which included the independent (i.e not state funded) Olive Tree primary school. They persistently questioned primary children about their attitudes towards homosexuality. Contrast this to happenings earlier this year, where a number of Catholic state-funded schools across the Lancashire region in the North-West of England distributed a booklet to pupils discussing a boy dealing with homosexual attractions, that suggested, could stem from “an unhealthy relationship with his father, an inability to relate to other guys or even sexual abuse.”  The booklet went on to state that the homosexual act is “disordered” and was directed against “God’s natural purpose for sex – babies and bonding.” When the TUC wrote to Gove about what they believe to be a contravention of current equality legislation, he insisted: “the law did not extend to the school curriculum, and any materials used in sex or relationship education would not be subject to the discrimination provisions of the Act.” [12] It will be interesting to see whether Mr Gove will make a similar defence of the implicated Muslim Schools in the Trojan Hoax affair, when Ofsted release their reports.