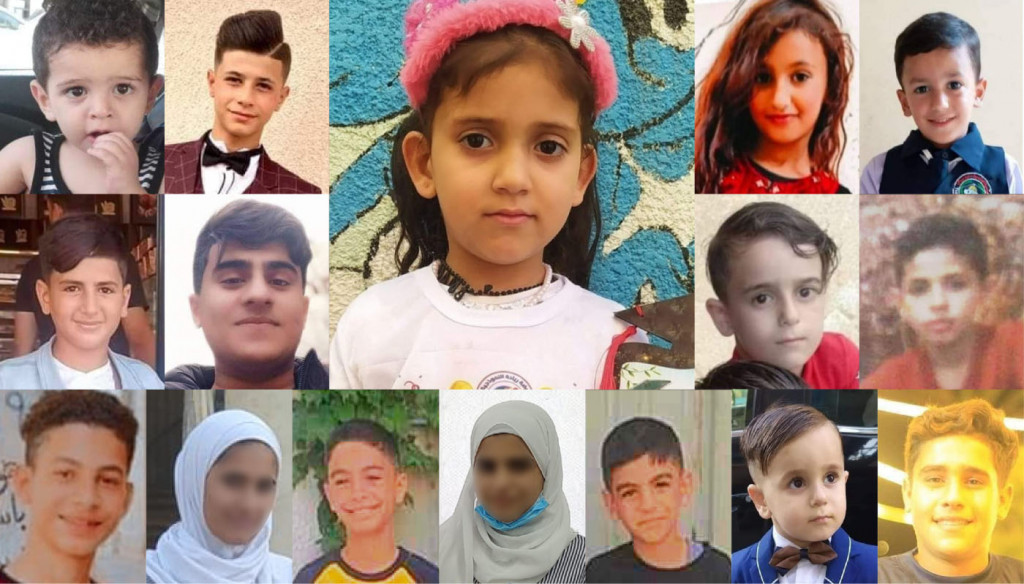 Devastating Israeli air strikes have killed 16 children, including toddlers, in three days of relentless bombardment on the besieged Gaza Strip. A tentative ceasefire was called on Sunday, but not before scores of Palestinian civilians had been killed and many more injured as a direct result of Israeli aggression.

Alaa was playing with her friends outside her home in the Shujaiya area when Israeli jets struck. She was killed on Friday 5th August whilst her young brother and father were wounded in the strike.

Abu Diab Qaddoum, a cousin of Alaa commented: “Alaa was an innocent five-year-old playing in the street with her brothers and cousins. What did she do to be killed?”[1]

Momen al-Nairab, aged 5, was killed on Saturday 6th August when Israeli warplanes bombed Jabalia refugee camp. The 5 year old together with other children, including Hazem Muhammed Ali Salem and Ahmed Muhammed al-Nairab, aged 11 were also killed in the raid on the densely populated refugee camp.

It is estimated that 2 million people live in the Gaza Strip which has been described as ‘the world’s largest open-air prison’ and according to the UN agency for Palestinian refugees (Unrwa), Jabalia refugee camp, which currently holds over 100,00 people, had already suffered from regular electricity cuts and contaminated water, but now has to contend with rebuilding homes whilst being suffocated by a land, sea and air blockade.

In a morbid escalation, Fallujah cemetery was also attacked in the unprovoked and illegal air strikes. Five boys were killed as they sat beside a grave. Sami, an eyewitness said: “They come to sit here every day. This is a safe area [from the bombardment].”[4]

11-year-old Leen Matar was playing at her grandparents’ home when an Israeli warplane dropped bombs on her refugee camp. Describing the incident, the young girl, lying on a hospital bed said: “Suddenly, the ceiling fell on us. We started crying and I hugged my aunt who was injured. We were calling our neighbours to rescue us, but the door was above us. Thank God, my injury is stable, but I am shocked and scared.”[5]

The intended target of these disproportionate attacks seems to be an adjacent house where members of the armed group Palestinian Islamic Jihaad including Khaled Mansour, commander of the southern division of al-Quds Brigades, were killed. Three women, with no affiliation to the group and a 14 year old child, were also killed in the Israeli bombing.

It should be noted that this extra-judicial assassination was conducted pre-emptively and targeted a residential building with no discernible military value and, quite predictably, killed many civilians.

Another resident, Wesam Jouda, of the densely populated area tells how he was playing with his children when consecutive air strikes struck his neighbourhood.

When Jouda did return, he was asked for permission to bulldoze his house so that access could be gained to people trapped beneath the rubble. In a testament to the selflessness of the Palestinian people, without hesitation, he agreed.

Jouda was asked, whilst standing on the rubble he once called home, if he regretted his decision. His answer was decisive and inspiring:

Another resident who rushed to assist after hearing the aerial bombardment described pulling corpses out from the rubble:

According to the Gaza Ministry of Health, the three day illegal and unprovoked air strikes killed 44 Palestinians, including 16 children and three women. A further 360 were wounded, including 151 children and 58 women.

In 2021, the UN Human Rights Council (HRC) established an inquiry into Israeli breaches of international humanitarian law and “systematic discrimination and repression based on national, ethnic, racial or religious identity.” However, rather than reflect on its actions or at the least cooperate with the inquiry, instead, Israel responded by accusing the UN HRC of “moral bankruptcy” with an “obsessive bias against Israel”.[9]

In response to Israeli aerial bombardment, Palestinian Islamic Jihaad fired hundreds of rockets at Israel. A cessation to hostilities was agreed on Sunday although there are concerns the tenuous truce will not hold.

Whilst Western Europe has quite rightly expressed revulsion at Russian war crimes in Ukraine, commentators have pointed at the double standards when those same actors simply looked the other way, when similar if not worse was conducted by Putin’s forces in Syria. These accusations of double standards were amplified by the most recent comments made by the Ukrainian Ambassador.

Indeed, many on social media voiced their bewilderment by comments made by Ukrainian Ambassador to Israel, Yevgen Korniychuk, who expressed his solidarity with Israel following the three-day relentless bombardment of the Gaza Strip.

A simple question many on social media are asking is: ‘What is the difference between Russian aggression in Ukraine and Israel’s attacks on the besieged Gaza Strip, except that the latter only has homemade weapons with which to defend themselves?