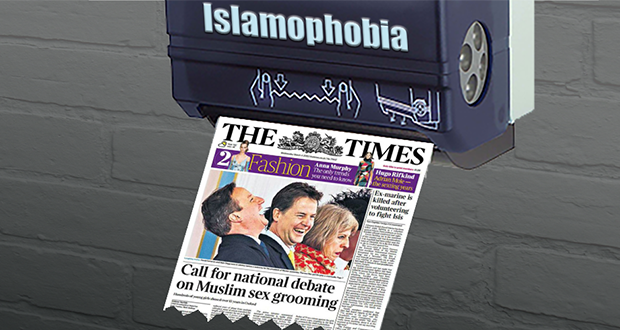 In June 2013, seven men that had perpetrated the brutal rape, torture and abuse of vulnerable girls in the care system were sentenced. Five of the men were sentenced to life imprisonment with two serving between 12 and 20 years. Five out of the seven perpetrators were of Pakistani origin and this case comes after the high profile Rochdale grooming gang hit the headlines. Yesterday the Oxford Safeguarding Children Board (OSCB) released its Serious Case Review (SCR). [1] The SCR details the massive systemic errors that allowed these despicable individuals to act with impunity. This morning the Times front page carried the story with the incendiary headline, ‘Call for national debate on Muslim sex grooming.’ [2]

This cynical exploitation of what is essentially a human tragedy is a sign of the acceptability of Islamophobia in our society. It does nothing to deal with the real issues of Child Sexual Exploitation (CSE), sexualisation of young children, failures in the care system and the systemic problems that allow CSE to take place. All it does is add to the existing climate of hatred against Muslims.

The horrific case of Child Sexual Exploitation in Oxford is a tragedy of epic proportions. Seven men groomed up to 373 girls for sex. All of the victims were in the care system, they were already vulnerable and needed to be protected. They were plied with drugs and alcohol, raped, used as prostitutes, tortured and trafficked around the country. Police were approached by victims at least six times, aged between 11 and 15. Each time they were ignored.

A number of social workers spoke of being aware at the fact that they were being groomed but no one joined the dots together until much of the damage had been done and the lives of these young people were destroyed by these sadistic men. The seven men were eventually convicted in 2013. It is clear that had they not been prosecuted they would have continued to exploit these girls and many others.

Five of the seven convicted perpetrators were of Pakistani heritage, whilst all the girls were white and in the care system.

The Times article suggested foolishly that there is a link between ‘Muslim’ identity and the sexual exploitation of young girls. There are obvious problems with this claim.

It seems obvious to say this and frankly ridiculous to even entertain the suggestion but these men were not acting according the moral teachings of Islām.

In the OSCB report numbering 133 pages, there is merely one reference to Pakistani/Muslim heritage as a factor in group CSE. The reference is a call to the government to look at why a significant proportion of those found guilty in this particular case are believed to be from this background, or more importantly self-identify from this background.

With a significant proportion of those found guilty nationally of group CSE being from a Pakistani and/or Muslim heritage, relevant government departments should research why this is the case, in order to guide prevention strategies. [4]

Crime is crime, the criminal justice system should not look at the ethnic, religious or other identity of the perpetrator unless it has a clear connection to the crime. Why are the other aspects of their lives not pertinent to this case, such as the fact that they had dead end jobs or were unemployed, or they saw trafficking as a lucrative way of making money?

On 19th February 2014, Shaykh Riyad Haniff-Nadwi, PhD, a well known scholar in Oxford wrote an open letter to the Muslim community in Oxford. He reiterated the damage these crimes have wreaked upon the image of Muslims, the smearing of Islām by some, the obvious lack of Islām in the perpetrators and the need for parents to be even more forthright in communicating our Islamic values, especially in the highly sexualised society that our children live in:

I am sure you are painfully aware of the recent high profile “Bullfinch” case of the abuse and molestation of young girls in the city of Oxford by men from the Muslim community. You will also be aware of the intense damage this has done to the public perception of the wider community of Muslims living in Oxford.

Some saw these tragic events as an opportunity to smear the religion of Islām and Muslims in general with the vile deeds of the perpetrators. There were national debates in which respectable academics, journalists and commentators appeared to abandon their faculties of reason and sanity to argue that these events – characterised by drugs, alcohol, illicit sex, prostitution, abuse, rape, and pimping – were somehow inspired by Islām.

I do not need to remind anyone about the well-known prohibitions of all of the above in Islām: these are forbidden actions in the consciousness of every sane Muslim. The behaviour of any Muslim indulging in such activities can be seen from only a single perspective: as a catastrophic drift away from the moral teachings of Islām. These vices are categorically prohibited by our faith. There are no ambiguities as to the verses of the Quran and the rulings of the major schools of jurisprudence in regard to these vices.

Now, the reason I have decided to write this letter is because I met an officer from the Thames Valley Police recently. He informed me that it seemed as if the Muslim community had not learnt any lessons from the consequences of the recent Bullfinch tragedy. Upon seeking clarification of his sombre statement, he informed me that these activities are continuing. Young men in our community are continuing to indulge in activities similar to those discovered in the Bullfinch operation and that it is only a matter of time before this whole calamity is repeated in Oxford.

Therefore, I humbly beg you to please speak to your children, and to your sons in particular, especially if they are of an age where they may be susceptible to drifting away from the moral teachings of Islām. Please make them aware of the dire consequences that have befallen the “Bullfinch” perpetrators, and more importantly the potential punishment for such actions in the Ākhirah (hereafter) on the Day of Judgement. Also, please remind them that in our technologically advanced world, crimes of this nature are hard to conceal, however much we may believe them to be secret. And even if we managed to conceal our bad deeds in this world, they will never be concealed from Allāh, Most High, who has the power to expose and punish us for our actions. Teach them that it is never too late to repent. Allāh forgives those who repent and who have a firm conviction to never return to sinning:

‘O you who have believed, repent to Allāh sincerely. Perhaps your Lord will remove from you your misdeeds and admit you into gardens beneath which rivers flow on the Day when Allāh will not disgrace the Prophet and those who believed with him. Their light will proceed before them and on their right; they will say, “Our Lord, perfect for us our light and forgive us. Indeed, You have power over everything.”’ (Al-Quran 66:8)

If as fathers and mothers you find it difficult to communicate these matters to your sons then for the sake of Allāh please seek help from the Imams of the mosques or the Ulama (scholars) in Oxford. [5]

Firstly we have to be very clear that these perpetrators are not in any sense motivated by the markers of identity that they are ascribed with, especially Islām. In doing so we must not play into the hands of those that harbour hatred towards the Muslims and want to believe this is how Muslims really are.

Secondly, we have to call out this Islamophobia for what it is, this has clearly motivated the Times headline. We need to be vocal in challenging this by complaining to the Times and the press regulator, IPSO, despite its lack of independence and toothlessness.

Mend (www.mend.org.uk) have produced a useful template to make complaining easy and in reference to the Editors Code of Practice:

I wish to voice my strongest concern at a headline on the front page of The Times Newspaper today (4/3/15) ‘Call for national debate on Muslim Sex grooming’.

This is an offensive and misleading headline.

I look forward to your urgent attention to this matter and an apology to the readers.

Finally, we have to realise that in Islām we have the best tool to safeguard the values of our children. There is an incident that took place in the Messenger of Allāh’s lifetime (sallAllāhu ‘alayhi wasallam) that provides useful advice to parents and their relationship and interaction with their children.

“Would you like that someone did this with your mother?”

His response was unequivocally no, he loved his mother and he could not imagine anyone taking advantage of her in that way, he would die before he would let that happen.

The Messenger of Allāh proceeded to ask him, “What about your sister, or your daughter, or your aunt?”

Each time he was asked he answered no. He could never imagine it, let alone permit it.

As a result of this brief interaction the boy walked away with a resolute mind, he would not do to another’s mother, daughter, sister or aunt, what he would not want done to his own. Because every woman has a value that ought to be respected, Muslim or non-Muslim, it does not matter who.

This is often a scenario I mention when I run workshops for parents, how we can translate our values with our children in a way that will resonate with them, because in Islām lies the solutions for 21st century problems.

ASIAN CHILD GROOMING GANGS GROOMING ISLAMIPHOBIA PAKISTANI RACISM RAPE SENSATIONALISM SEX THE TIMES TIMES
Share. Facebook Twitter LinkedIn Email Telegram WhatsApp
Previous Article“A reminder for those who fear Allāh in the unseen…”
Next Article Are we turning into ‘Me, Myself & I’ Muslims?